The blaze at a tire warehouse has sparked alarm among residents just over a month after a deadly blast hit the same port. The fire destroyed thousands of food parcels and 500,000 liters of cooking oil. 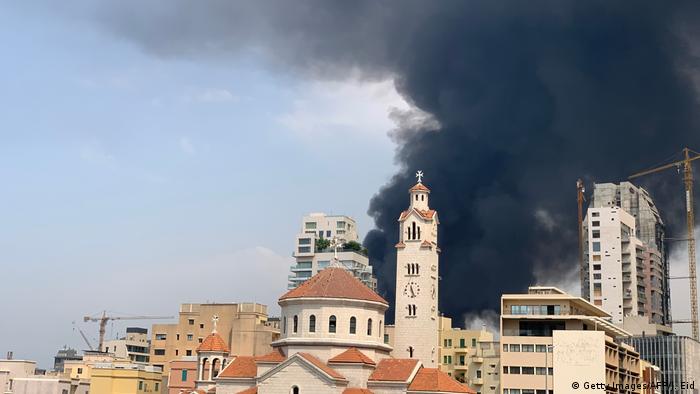 A warehouse at Beirut port caught fire on Thursday, sending plumes of black smoke into the air and spurring panic among residents.

"A fire broke out at a warehouse for oils and tires at the Free Zone of Beirut's Port, and operations to extinguish it have begun; army helicopters will take part in extinguishing it," the army said in a statement. Live footage showed one helicopter flying to the area with a water container underneath.

Local media said businesses with offices near the port asked their employees to leave the area, while troops closed a major road that passes near the port.

Global environmental watchdog Greenpeace warned the residents to protect themselves from tire smoke.

Burning tires "produces a lot of fine particulates, visible smoke and ash but also a lot of volatile organic pollutants that can be inhaled even outside the smoke plume,"  they said.

"The smoke can include highly toxic and carcinogenic compounds, black carbon... and acid gases," according to Greenpeace. 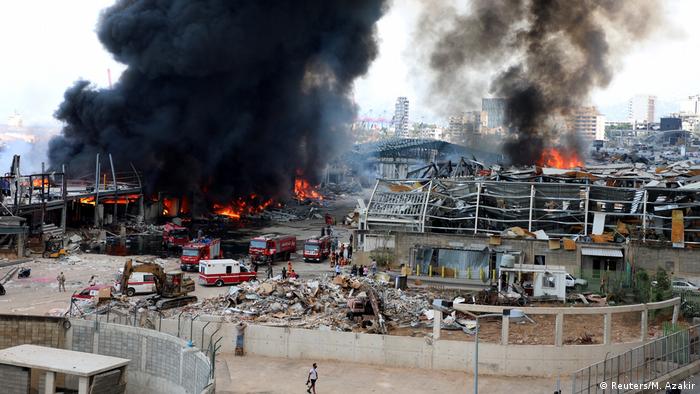 Too early to know cause of fire

Lebanon's president, Michel Aoun, said the fire could have been an "intentional act of sabotage, the result of a technical error, ignorance, or negligence".

"In all cases, the cause needs to be known as soon as possible, and those responsible held to account," he said, according to his office.

Port director Bassem al-Qaisi told Voice of Lebanon radio the fire started in a warehouse where barrels of cooking oil were placed and later spread nearby to where tires were piled.

"It is too early to know if it is the result of heat or some other mistake,'' al-Qaisi said adding that the black smoke was from burning tires.

'We just can't catch a break'

The oil may have come from stores kept by the International Committee of the Red Cross. The aid organization said its humanitarian operations risked serious disruption as a fire hit a warehouse where it keeps food aid.

"The warehouse on fire is where ICRC stocks thousands (of) food parcels and 0.5 million" liters of oil, ICRC regional director Fabrizio Carboni said. "Our humanitarian operation risks to be seriously disrupted."

"Insane fire at the port, causing a panic all across Beirut. We just can't catch a break," tweeted Aya Majzoub, a Lebanon researcher with Human Rights Watch.

The latest fire comes just two days before another, smaller fire broke out at the port. In a signal of distrust between the people and the authorities, some social media users have accused the government of trying to destroy evidence in the port area. Others, like criminology researcher Omar Nashabe, called for the officials to take responsibility.

No repeat of August explosion

Warehouses at the port had been shattered by a deadly explosion last month.

The August 4 blast killed 190 people, injured around 6,500 and decimated grain silos integral to Lebanon's infrastructure, after nearly 3,000 tons of ammonium nitrate caught fire. The chemical had been stored in poor condition at the port for several years.

George Kettaneh, the head of the Lebanese Red Cross, said authorities did not fear another blast as a result of the flames.

No injuries have been reported so far, but some people who were nearby were suffering from shortness of breath, he said.

A team of rescue workers in search for Beirut blast survivors has found no sign of life beneath the building that collapsed in last month's explosion. Rescuers would now focus on clearing the rubble and finding remains.