The Israeli leader warned that there could be another disaster similar to the port explosion that killed dozens and injured thousands. Hezbollah denied the charge, showing that the building could harbor no weapons. 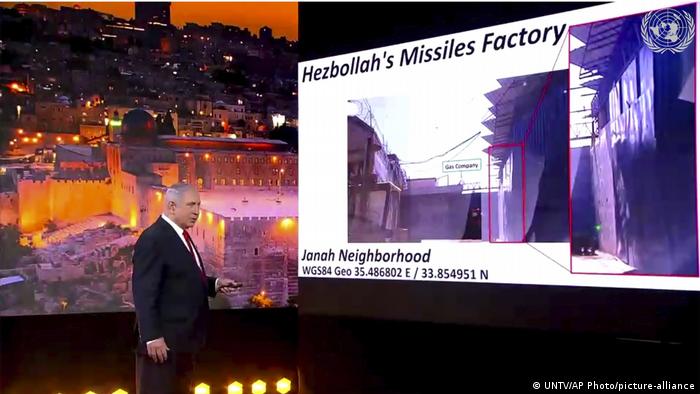 In a pre-taped message to the UN General Assembly, Israeli Prime Minister Benjamin Netanyahu accused Lebanon's Iran-allied Hezbollah movement on Tuesday of keeping a secret arms depot in Beirut near a gas company.

Netanyahu warned that the supposed arms depot in the Jnah neighborhood could lead to another explosion after the deadly blast in the port last month that killed nearly 200 people and injured thousands.

While using a lazer pointer on a map of Beirut, he explained: "it's a few meters away from a gas station. It's 50 meters (164 feet) away from the gas company. Here are more gas trucks. And it's embedded in civilian housing here."

"I say to the people of Jnah … you’ve got to pretest this. Because if this thing explodes, it's another tragedy."

Netanyahu also tweeted about the site, including stills from his speech.

The Israeli military said in a statement that it had reported the site Netanyahu mentioned and others "numerous times, both to the UN and additional diplomatic networks, as well as via various media channels." It said the Lebanese government should intervene.

'Not a speck of what Netanyahu said'

Hezbollah leader Hassan Nasrallah denied the existence of the missile sites. Nasrallah accused the Israeli PM of trying to provoke Lebanese people against the Shiite movement.

"We are not putting our missiles between houses," said Nasrallah in a televised speech an hour after Netanyahu spoke, adding, "we know very well where to put our missiles."

Soon after Netanyahu's speech, Hezbollah took several journalists on a tour of what it said was the site, which was on a crowded street in the Jnah neighborhood. Hezbollah described the building as a factory, showing machines that cut metal as well as some gas cylinders. 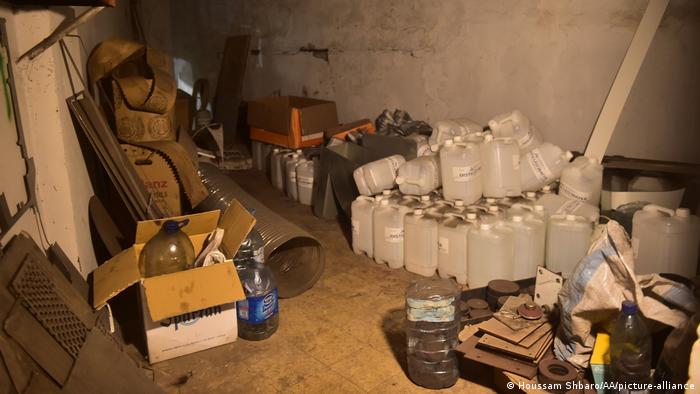 Hezbollah allowed journalists to investigate the building themselves

"There's not a speck of what Netanyahu said in this factory. This is a private factory that makes metal pieces, with lazer cutting machines and such, that's all," said Mohammad Rammal, who said he ran the factory in the building. "These are all lies, what more can I say?"

Rammal said he is a Hezbollah supporter, said the factory was for "cutting iron bars."

"There are no missiles, as you see," Rammal told reporters during the tour.

Hezbollah is financed and trained by Iran, and has repeatedly launched attacks from Lebanon against Israel. Israel regularly attacks Iranian and Hezbollah controlled areas in Syria, and attacks Lebanon.

Hezbollah is considered a terrorist organization by several nations, including the US and Germany.

Israel has welcomed Lithuania's ban on people affiliated with Hezbollah. Lithuania says the move was in solidarity with the US, Germany, the UK and the Netherlands, who view Hezbollah in its entirety as a terror group.

An international tribunal has convicted the lead defendant in the assassination of former Lebanese Prime Minister Rafik Hariri in 2005. The verdict could stoke further political turmoil in the country.