Lawlessness in eastern Ukraine | News and current affairs from Germany and around the world | DW | 23.09.2014

People are living in fear in the areas of eastern Ukraine under pro-Russian separatist control. Human rights activists have sounded the alarm amid reports of widespread physical abuse and arbitrary punishment. 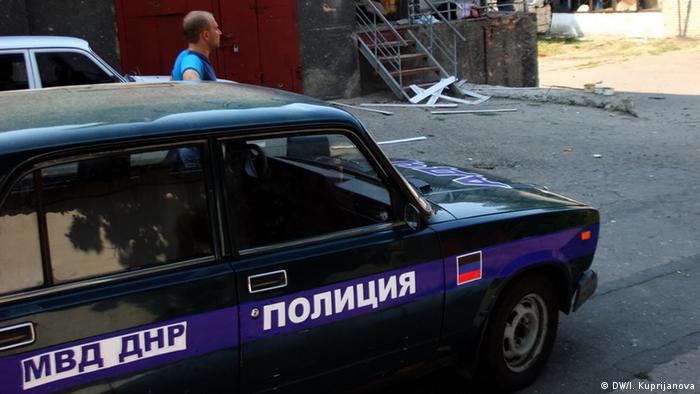 Pro-Russian separatists are making people accused of violating public order do forced labor, according to a report by the international human rights organization Human Rights Watch (HRW) earlier this month.

The self-appointed authorities in the so-called "Donetsk People's Republic," the parts of eastern Ukraine under separatist control, have announced on their website that they are responsible for enforcing what they consider to be "order."

Now people from Ilovaisk have been talking about the kind of punishments the separatists are meting out. During heavy fighting around the town of Donbass at the end of August, supporters of the "Donetsk People's Republic" killed a 23-year-old man whom they accused of looting. There are more and more reports of arbitrary shootings, with sentences handed down by a summary court. 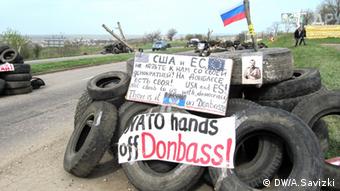 Some people were forced to work on roadblocks, where their lives may have been in danger

According to both the HRW report and people in the region, draconian punishments are being imposed even for petty offences - forced labor in particular. The separatist militias are punishing people in this way if, for example, they have broken the curfew or don't have their ID on them. They are not given a trial.

"Citizens who had to do forced labor were beaten and brutally humiliated," states HRW, adding that it had also documented cases "in which people were forced to do duty on roadblocks and in combat zones, where they were in danger of being injured or killed." Hugh Williamson, director of HRW's Europe and Central Asia division, has demanded an end to these "punishment brigades," as they constitute a gross violation of human rights.

"My brother was arrested near Donetsk. It's possible that he was a bit drunk and didn't have his ID on him," says Natalia. She says that acquaintances saw him having to pick up rubbish off the street as punishment. He was only released days later. "He was given plenty to eat. Anyone who refused to follow orders was beaten. But I don't want to go into more detail," she says.

"I saw a man sweeping the streets in front of the separatists' quarters," says Sergei, who comes from eastern Ukraine. "His face and body had been so badly beaten that I had great difficulty recognizing him. I then observed him doing different sorts of work for two or three weeks. He dug ditches and unloaded trucks. Now he's with the separatists. He says he had no choice," Sergei reports.

Alexander is 59 years old. In Donetsk he couldn't talk about his experiences; he was only able to do so once he was in a safe place. On August 11, unidentified people in camouflage uniforms dragged him into a car and took him to the office of the Ukrainian Interior Ministry, which the separatists have occupied. There they showed him the photo of a man who was said to have taken part in the "anti-terrorist operation" by the Ukrainian army against the separatists. The photo resembled him. "They incarcerated me for four days as a result. But I was lucky - they didn't beat me," he says.

"These people are simply criminals. I begged them for days to call my relatives and tell them I was alive. It wasn't until the fourth day that representatives of the 'Ministry of State Security of the Donetsk People's Republic' came to see me and I was released. They couldn't substantiate the accusations against me."

Alexander suspects that he was arrested because of his pro-Ukrainian sentiments: "All my neighbors saw that I used to have a blue-and-yellow Ukrainian flag in my car." 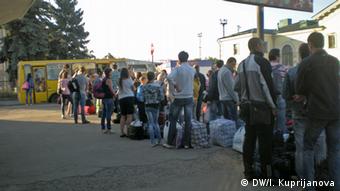 An increasing number of people are fleeing the conflict-hit region

Alexander Bukalov, the head of the human rights organization "Donetsk Memorial," warns that in the separatist-controlled areas, citizens have no legal protection and that there is no freedom of assembly or freedom of expression. He says that many people are leaving the region for this reason, too.

Bukalov explains there are no legal mechanisms by which people can get themselves released or receive compensation. "That doesn't mean that everyone who supports the separatists is a criminal, or that there is chaos everywhere," he says. "But when things are this arbitrary, people feel absolutely defenseless."

Pro-Russia rebels in eastern Ukraine say they have started pulling back heavy artillery from the frontline. The step aims to establish a buffer zone agreed under a new truce deal. (23.09.2014)