Kharkiv prepares for possible Russian invasion despite ceasefire | Europe | News and current affairs from around the continent | DW | 18.09.2014

The northeastern Ukrainian city of Kharkiv prepares for a possible invasion of pro-Russian separatists despite the ceasefire in the neighboring Luhansk and Donetsk region. That includes fortifying the border with Russia. 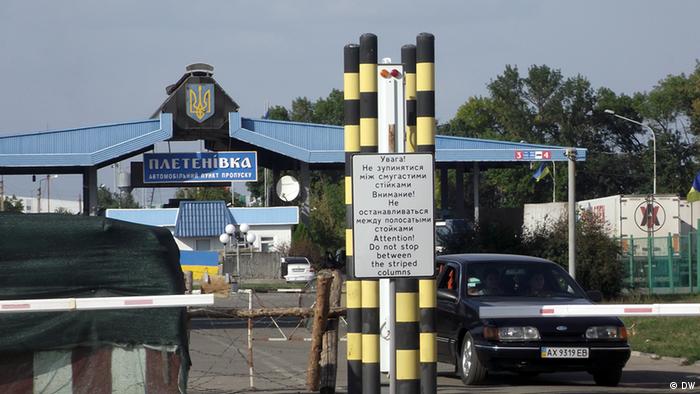 Ukraine's Pletenivka border crossing is busy. Volunteers dig ditches and construct shelters and firing ranges. Most of the activists are from the nearby city of Kharkiv, which is gripped by fear that the conflict may not stay confined to the neighboring region.

They followed calls on social networks to help fortify the Ukrainian border with Russia, said Dmytro Makowezkyj of the city's civic defense group, the hromadska warta. Calls for donations so they can buy shovels, gloves, tools and rent vehicles are also going out via social networks.

"The border officials gave us an excavator, but we could really use a bigger one that would enable us to do in a day what we do now in a week," Makowezkyj said, adding that they lack the funds to buy heavy equipment. 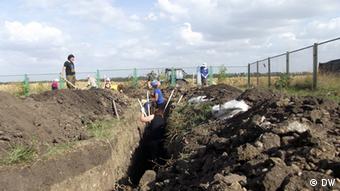 Volunteers at work at the Ukraine-Russia border

In Pletenivka, people have been busy reinforcing the border for almost half a year. Even border officers are involved in erecting fortifications.

"Of course, the volunteers follow our plans and are supervised by our engineers," said Serhij Kolesnitschenko, a Ukrainian border police officer. The Russian side at the Shebekino border crossing was "slightly alarmed" when civilians appeared at the border, carrying shovels and singing patriotic songs, he added. "We told the Russians we had some construction work to do, and that the situation is calm," Kolesnitschenko added.

Mykola Grigorjew, who once worked for Ukraine's Emergency Management, helps the volunteers from Kharkiv. He lives in Vovchansk, five kilometers to the northeast and right on the border with Russia.

"Only six people from my town came to help dig ditches," he said. "In the May presidential elections, the mayor, the lawmakers and most of the residents voted for the Party of Regions candidate." Many people in Vovchansk still support former-President Viktor Yanukovych, who fled to Russia, Grigorjew said, adding that this section of the border is particularly problematic.

Fearing a Russian invasion, authorities in Kharkiv, 80 kilometers from the Pletenivka border crossing, launched a so-called "Open University" where they conducted exercises on public squares. Officials hope the drills will prepare people for possible combat operations.

"Everyone should be able to pack an emergency case, with identity cards, food supplies, water and medicine," said one of the participants in the drill, Tatjana Rjabokon of the Kharkiv Parachute Association. People shouldn't seek shelter in the metro stations, she added, but in air-raid shelters.

Every weekend, several hundred Kharkiv citizens participate in the exercises. They are taught who to handle weapons and protective vests and how to help the wounded. Some of the trainers were involved in fighting in eastern Ukraine. Survival training sessions are on offer, and people can join partisan units. Both men and women can participate, a coach for the "East Corps" partisan unit points out, adding that the aim is to give them the skills they need to "carry out guerilla operations."

Yaroslav, 22, is keen to join the unit. For health reasons, he said he wasn't accepted in the army. But in view of the current situation in the country, he wants to learn how to protect himself and his family. 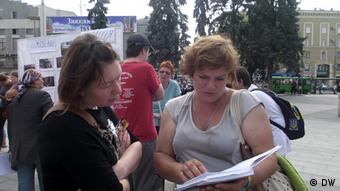 Oksana Martschuk Points out the shelters

Authorities have said preparations for the defense of the Kharkiv region have been in full swing for quite some time. Numerous road barriers were set up, soldiers are erecting fortifications and volunteers are signing up at recruitment offices. The regional administration plans to give the population detailed information on the bunkers and make sure they are accessible.

But it's not enough, according to Oksana Martschuk.

Authorities needed weeks to provide her and the other activists a list of the bunkers in Kharkiv. After inspecting the air-raid shelters, they realized that only a third of them were actually ready for use. "The others are either closed off or full of junk," Oksana said. "Nothing works, so now we're getting volunteers to clean up."

The authorities have asked the activists to refrain from creating panic in the city. But the activists don't agree, saying war is less likely if the city is well-prepared for an invasion of Russian troops or Donetsk militia. "It's better that all the citizens are alarmed and then nothing happens, than vice versa," said Tatjana Pasynok, a supporter of Kharkiv's Euromaidan civil protests that led to Yanukovych's ouster.

The pro-European activists warn a "separatist bomb" is ticking away in Kharkiv, a reference to supporters of the pro-Russian anti-Maidan.

They do not have official permission, but for the past six months, they have been staging regular activities. About 100 protesters show up every weekend. Euromaidan has a significantly larger group of supporters, and that invariably leads to clashes between the two camps.

Ceasefire is a myth in Donetsk

The Evdokimova family spent over two months away from their home in Donetsk to escape the fighting. When they headed back to the city with their five children, they quickly found that life was far from peaceful. (18.09.2014)

Ukrainian forces say they're marching further east into territory abandoned by the Russians. Troops are working to restore normal life in liberated towns, but many Ukrainians see their newfound freedom as an opportunity to flee away from the front lines.