Pro-Russia rebels in eastern Ukraine say they have started pulling back heavy artillery from the frontline. The step aims to establish a buffer zone agreed under a new truce deal. 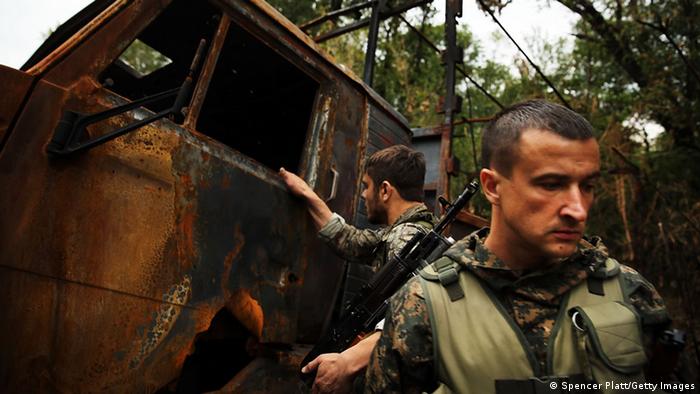 The separatists said Tuesday they had started the withdrawal process after government forces also began moving big weapons and armored vehicles from the conflict zone.

"We have withdrawn artillery but only in those areas where the Ukrainian regular units have done the same. Where Ukraine hasn't withdrawn artillery, we haven't done so," Donetsk-based rebel leader Alexander Zakharchenko told the Interfax news agency.

Only "artillery with calibre greater than 100 mm" was being removed, he added.

Ukraine announced on Monday that it had been able to begin withdrawing equipment after a decrease in separatist artillery attacks and firing from Russian territory.

The move by both sides to roll back heavy weapons from the frontline fulfills a key requirement of a new peace agreement struck during talks between separatists and Kyiv in the Belarusian capital Minsk on Saturday. It aims to create a demilitarized zone of around 30 kilometers (20 miles) to give a ceasefire deal reached on September 5 a better chance of success.

The agreement came after the rebels made significant gains across southeastern Ukraine, with Kyiv alleging that they were aided by Russian resources in doing so.

Both Kyiv and several Western countries have repeatedly blamed Moscow for supporting the insurgency with weapons and personnel, but Russia has adamantly denied involvement.

Around 80 observers from the Organization for Security and Cooperation in Europe (OSCE) are on the ground to check that the truce is being complied with, and although it appears to be holding, the ceasefire has been violated several times in the past few weeks.

"Not everything's clear with the ceasefire," Zakharchenko said. "Firing from the Ukrainian side is still going on as before. I would call this a slow-moving military operation."

After five months of fighting, the violence in rebel-held areas has subsided somewhat, but news agency AFP reported Tuesday that battles involving heavy artillery fire were still continuing around Donetsk's airport. The city is the largest rebel stronghold, but its airport is held by government forces.

According to the city council, one Donetsk resident was killed by shelling overnight, bringing the total of Ukrainian troops and civilians killed since the ceasefire took effect to 40.

Almost 3,000 people have so far died in Ukraine's conflict, which began in the aftermath of the ousting of pro-Moscow President Viktor Yanukovych in late February.