Participants at peace talks in Minsk have agreed to create a buffer zone to separate pro-Russian separatists and Ukrainian government troops. Negotiators also struck a deal on the withdrawal of foreign fighters. 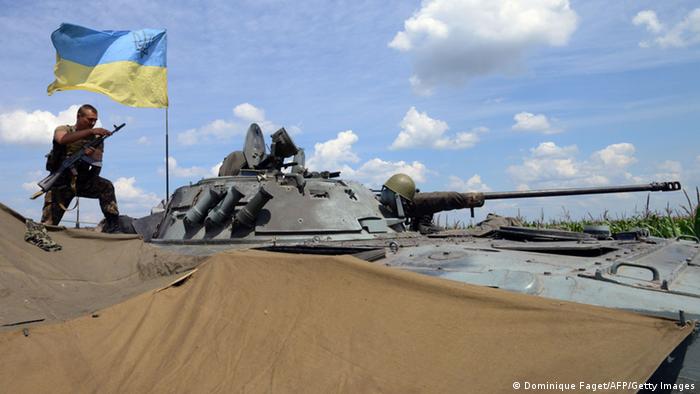 Pro-Russian separatists and representatives from both the Russian and Ukrainian governments on Saturday morning agreed on an artillery buffer zone.

The sides agreed to move heavy weapons 15 kilometers (9 miles) away from the front line on each side, effectively creating a 30 kilometer buffer area.

"We have signed a memorandum," Kyiv's representative, former president Leonid Kuchma, told reporters. Kuchma added that monitors from the Organization for Security and Cooperation in Europe (OSCE) - who mediated the talks in the Belarusian capital, Minsk - would check the buffer zone, and would extend their observer mission along the Russian border.

Kyiv claims the separatists have been reinforced by Russian supplies and fighters crossing the porous border.

Separatist leader Igor Plotnitsky said it was expected that the document would lead to the creation of "a zone of complete security." He added that the status of the rebel-held regions of Luhansk and Donetsk - something the secessionists have insisted on - was not discussed.

An end to outside meddling?

Kuchma said the two sides had also reached an agreement on the withdrawal of foreign armed formations from Ukrainian territory. The news emerged after talks that began on Friday dragged on into the night.

Russian ambassador to Ukraine Mikhail Zubarov, who was at the talks, said he hoped the talks would move the peace process forward.

Ukrainian President Petro Poroshenko agreed to an unlimited ceasefire with the rebels at talks in Minsk two weeks ago, after Ukrainian forces suffered military reversals against the separatists and lost a large swathe of the Donetsk region near the Russian border.

The pro-Russians have said they want sovereignty from Kyiv, having already declared two "people's republics" in Donetsk and Luhansk.

The Ukrainian parliament this week passed a bill granting wide-ranging autonomy to the separatists, including the right to maintain people's militias in the breakaway areas. While the law refers to a temporary special political status, Ukrainian officials have insisted this does not mean sovereignty

The leaders of Russia and Ukraine have agreed that a truce deal is "generally holding." However, both sides said more needed to be done to secure the ceasefire further. (06.09.2014)