Latvian vote overshadowed by Russian questions | Europe| News and current affairs from around the continent | DW | 03.10.2014

Latvia, the EU country with the largest population of ethnic Russian, elects a new parliament this Saturday - and it votes largely along ethnic lines. Amplifying the differences are events in eastern Europe. 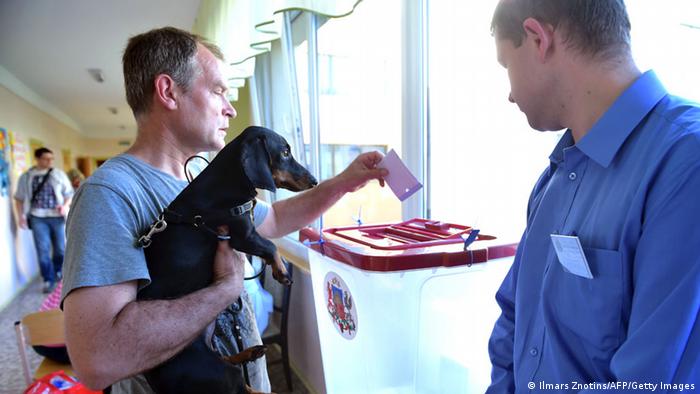 As Latvia goes to the polls to electsa new parliament Saturday (04.10.2014), Russia's Ukraine policy will likely have a strong impact on the result. The government in Riga is no longer ruling out an act of aggression from the Kremlin, which has repeatedly declared its intent to protect Russians abroad. Their share of the total population of the Baltic state is 26 percent, significantly higher than that in Ukraine, where they make up 17 percent.

Latvia has a difficult relationship with Russia. In 1940 it was annexed by the former USSR.

"The experience of 60 years of Soviet occupation is rooted deeply in historical memory," says Norbert Beckmann-Dierkes, who heads the German Konrad-Adenauer Foundation in Riga.

The 100 seats in Latvia's parliament, the Saeima, will be fought for by 13 parties. Some represent Latvians only, others the Russian-speaking population, many of whom are so-called "non-citizens." These are mostly Russians who, after Latvia became independent in 1991, were not offered passports. Nearly one in eight residents in the country is a "non-citizen." 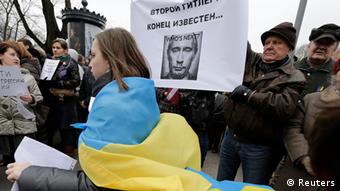 The Latvians and Russian-speaking minority live side by side, according to a report by the Organization for Security and Cooperation in Europe (OSCE), which examined the state of Latvian politics prior to the election. It's not surprising, therefore, that the parties evaluate the Ukraine crisis differently. While the ruling party bloc supports the EU and NATO - Latvia has been a member of both since 2004 - the pro-Russian groups are sympathetic to the Kremlin's policy.

Leading the current campaign is the center-left "Harmony" party, which is supported by the Russian-speaking minortiy, as well as the ruling center-right "Unity" faction. The Harmony party has excluded from its election program any mention of Russia or Russian questions. In doing so it hopes to capture the votes of ethnic Latvians, in contrast to the Unity alliance, which made ethnic issues and relations with Russia the primary theme of its campaign.

"They hardly talk about economic or social issues," says Alexandr Gaponenko, director of the Institute of European Studies in Riga.

Polls show Harmony in the lead, with anywhere from 17 to 19 percent of the vote. The party maintains a partnership with Russia's ruling "United Russia" party, and it criticized EU sanctions against Moscow. This annoys many Latvians. A further source of outrage came from Riga's mayor, Nils Usakovs, who's also the head of "Harmony." On Russian television he said that Russian President Vladimir Putin was "the best" for Latvia. Relations would be worse between the countries, he added, under a different Kremlin leader. 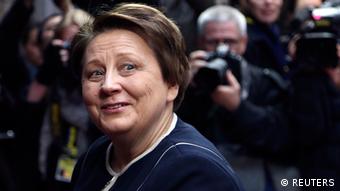 Laimdota Straujuma, an economist and previous minister of agriculture, is hoping for a surprise Unity upset

For the Unity alliance, polls show results of 13 to 15 percent. Its top candidate, Latvian Prime Minister Laimdota Straujuma, is committed to continuity and stability.

Chances for other parties

Due to fears of the Kremlin's policies, Latvia's nationalists are hoping for additional votes. However, a survey shows the "National Union" garnering no more than eight percent. A short-term easing of the crisis in eastern Europe could lead to a further drop.

What's still unclear is whether the "Russian Union of Latvia" still has a chance of entering the Saeima. Polls give the party a mere 1.1 percent of the vote.

"Clearly, on the part of the Russian-speaking population, there are no voices to be heard that are demanding 'defense' from the Kremlin," says Beckman-Dierkes.

A total of up to 30 percent of voters are still unsure how they will vote on Saturday. The biggest surprise could be in the results of a party that's rapidly gained in popularity, led by the former head of Latvia's General Accounting Office, Inguna Sudraba. She could fill the parliamentary vacuum with a "political center," says Juris Rosenwald, a professor at the University of Latvia.

An increase for the radical parties in parliament is hardly to be expected - rather for the moderates. The explanation is probably related to the fact that, despite the Ukraine crisis, there are few observable sources of ethnic tension in Latvia.

"Yes, the Latvians have some privileges that the 'non-citizens' do not. But in everyday life, there are no conflicts," says Alexandr Gaponenko, himself a "non-citizen."

The opinion is shared by Beckmann-Dierkes. "The day-to-day interactions between citizens and 'non-citizens' are unproblematic."

Fears of the Russian bear recalled to life

Eastern European states are expressing concern about the West's Russia stance, calling it indecisive and docile. In Poland, Romania and Bulgaria, dormant fears of past aggression are being reawakened. (10.09.2014)

Opinion: NATO at a loss

NATO has drawn a red line for Russia at its summit in Wales. The military alliance has chosen to use determined language with Moscow, but behind this resolve lies a perplexed organization, says DW's Christian F. Trippe. (06.09.2014)

A quarter of a century ago the world watched on in fascination as people from the Baltic States formed a giant human chain to demonstrate for their freedom. They have come a long way since. (23.08.2014)