Twenty-five years ago, the Argentine Israelite Mutual Association fell victim to a gruesome terror attack in Buenos Aires. Today, Jewish communities are concerned about growing anti-Semitism on the internet. 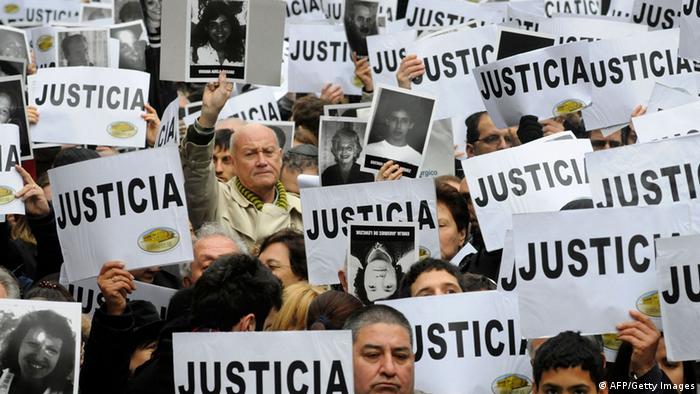 For years, Argentina's Jewish community sought justice for the victims of the AMIA bombing

July 18 marks the 25th anniversary of the bombing of the Buenos Aires Argentine Israelite Mutual Association (AMIA) building. A van loaded with explosives was detonated, killing 87 individuals and injuring over 100. It was the deadliest terror attack Argentina ever witnessed. To this day, the real perpetrators have not been identified, and it took almost 21 years until Argentina's parliament voted to compensate the victims and their relatives.

The anniversary has revived public debate on intolerance, discrimination and anti-Semitism in Latin America. "Latin America has not seen the physically violent anti-Semitism that other parts of the world have experienced through terrorist attacks," says Ariel Seidler of the World Jewish Congress Latin American branch. "There are anti-Semitic incidents, but in general Jewish communities can freely practice their faith."

Ariel Gelblung of the Simon Wiesenthal Center for Latin America concurs: "Prejudices and hatred can be found everywhere, including Latin America. But generally speaking, Latin America is not a region marked by anti-Semitism." But what is widespread, he says, is a tendency to equate Jewish communities with the state of Israel. So when there are growing tensions in the Middle East, anti-Semitic incidents elsewhere in the world tend to increase. But Gelblung insists that "we are no where near what Jewish communities are experiencing in Europe and the United States." 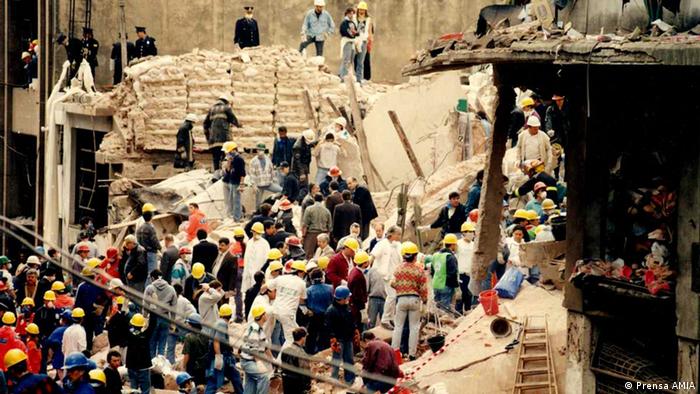 The AMIA bombing killed 87 people and injured more than 100

According to the US Anti-Defamation League's (ADL) index of Anti-Semitism, in 2015 19% of adults on the American continent harbored anti-Semitic beliefs. This value is higher in other parts of the world. For example in Western Europe, where in 2015 24% of adults held such beliefs, or in the Eastern Europe, where 34% held anti-Semitic beliefs.In the Middle East and North Africa, meanwhile 74% of adults held such beliefs in 2015, according to the ADL.

In Seidler's view, anti-Semitism barely exists in countries like Paraguay, Cuba and Guatemala. This also applies to Argentina, Seidler says, a country that has a 200,000-strong Jewish community among a population of 44 million people. He says in Argentina peaceful "co-existence and inter-religious dialogue are promoted." Adding that there, people accept one another.

Tensions in Chile and Venezuela

In Chile and Venezuela, however, the situation is much more serious. Seidler says "tensions in Chile are tied to the Middle East conflict and have led to anti-Semitic hate speech." This may also have to do with the fact that Chile is home to the largest Palestinian community outside the Arab world, according to Gelblung. It comprises some 400,000 members in a country of 18 million people, while Chile's Jewish community consists of just 15,000 individuals. And many Chilean citizens sympathize with the Palestinian wish for an independent state.

Ariel Gelblung says that criticizing the Israel government must not lead to members of the Jewish community being discriminated against. A Jewish man, who attends a university, must not be held accountable for something happening on the other side of the word, Gelblung stresses.

He argues that "during the time of the Hugo Chavez government [in Venezuela], policymakers propagated a form of anti-Semitism, and the country's Jewish community shrunk from 20,000 to just 2,000 members in less than 20 years." He also reports attacks on synagogues, expropriations, acts of aggression and that Jews were treated like foreigners in their own country. He says when minorities are ostracized they tend to be stigmatized as foreigners.

Even though most religious communities get on well in much of Latin America, things are very different online. Ariel Seidler warns that "anti-Semitic hatred spreads far more easily on the internet." He analyzes anti-Semitism statements made online on behalf of the World Jewish Congress. And says there is a stark difference between the online and offline world, with a quantitative and qualitative increase of anti-Jewish vitriol online. Seidler says the "most extreme case is that of David Fremd, who was murdered in Uruguay in 2016 by an Islamist." He says anti-Semitic material downloaded from the internet was found on the perpetrator's computer.

Both experts underscore that anti-Semites ought to be brought to justice swiftly. Gelblung says it is telling that the 1994 AMIA bombing still remains shrouded in mystery. "In the minds of many people, there is the belief that this was an attack on the Jewish community, but not on Argentina or its citizens." Gelblung is convinced that as this mindset continues to prevail, the crime will never will be fully solved.