A community mourns as Krefeld Zoo reopens after New Year′s fire | Germany| News and in-depth reporting from Berlin and beyond | DW | 03.01.2020

The Krefeld Zoo has reopened after a fire on New Year's Eve decimated its primate exhibit. Visitors mourned the community's loss but cherished the international support it has received. 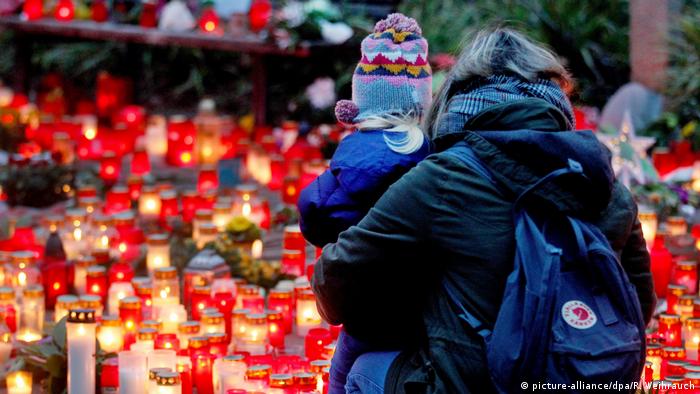 Hundreds of mourners gathered in the western German city of Krefeld on Friday as the city's zoo reopened for the first time since a fire on New Year's Eve decimated its primate exhibit.

A sea of flowers and candles from the previous night's vigil sprawled across the zoo's entrance, where visitors grappled with the tragic loss. Some 30 primates once housed in the 21,000-square-foot Great Ape House, including Europe's oldest gorilla in captivity, perished in the fire. Just two chimpanzees survived, the zoo announced on its Facebook page.

"It's a strange feeling, and I'm nervous about how it will be when you walk in," Sabine Doege, a local from Krefeld, told DW. Doege has been visiting the exhibit, a staple of the community for nearly 50 years, since she was a child.

"Somehow we grew up with them," she said of the animals lost in the fire. "I don't want to imagine how the primates felt that night."

In a press conference on Thursday, local police said the fire broke out when a mother and her two adult daughters released five paper lanterns tattooed with New Year's wishes into the night sky.

The family was unaware that a 2009 ban on the decorations in the state of North Rhine-Westphalia, where Krefeld is located, also applied to New Year's festivities, according to police. The family promptly turned themselves over to authorities, who confirmed the women are currently being investigated for negligent arson. If convicted, they face up to five years in prison, according to German law.

In a statement on Thursday, investigators also commented that the suspects had not expected the consequences of their New Year's celebration and that they were "infinitely sorry" for what occurred.

Visitors on opening day expressed that they, too, were sorry for the loss of life and what the tragedy means for the community.

The Krefeld Zoo opened its doors in 1938 and attracts nearly 320,000 annual visitors to the town, according to its website. The Great Ape House was seen as a model for other zoos in Germany and around the world when it opened in 1975, zoologists commented in the days since the tragedy.

"It's really, really difficult for me because I've been coming to visit the Krefeld Zoo since I was a child," one Krefeld father told DW as he took in the scene with his children. "I think the pain is running deep throughout the entire world."

Zoo spokesperson Petra Schwinn told DW that while the last 48 hours have been a "nightmare," she finds solace in the outpouring of local and international support.

As the zoo reopened its doors on Friday, she encountered mourners from neighboring European countries, and even received calls from zoos in Australia that are trying to protect their own exhibits as incessant wildfires sweep across the country.

"We realize how strong the community is," Schwinn said.

That community is now intent on rebuilding the zoo's primate stock. Representatives from the Rostock Zoo in northeastern Germany said they were already evaluating how their orangutan and gorilla stocks could be harnessed to help the Krefeld Zoo.

"Two gorillas live in our zoo that descend from those who once lived in Krefeld," Rostock Zoo curator Antje Angeli told German broadcaster NDR.

As part of the Krefeld Zoo's community since her childhood, Sabine Doege and her daughters wanted to support the zoo in any small way they could on reopening day.

"I talked about it with my daughters," she said. "They want to donate their allowance to help support the zoo and rebuild the Ape House."