Sky lanterns are simple, festive, and beautiful, but can also be dangerous. Authorities in various countries banned their use after several fires were blamed on the floating lights. 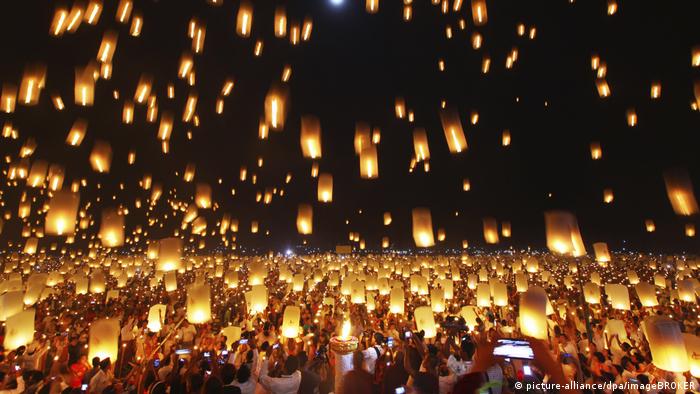 A simple wooden or metal frame, a paper shell, and a source of flame are all you need to create a sky lantern. They first took to the sky as military signals above the battlefields of ancient China, and are sometimes still called Kongming lanterns after a legendary 3rd century Chinese general who first put them to use. Today, people all around the world view them as good luck symbols.

Still, not everyone is a fan of the floating lights. Authorities in various countries believe them to be a fire hazard, a source of pollution, and possible disruption to air traffic.

A sky lantern works like a hot air balloon. The candle flame bellow the shell warms up the air inside it, causing the lantern to float up and stay airborne until the candle is extinguished.  Stiff edges near the bottom of the shell are meant to keep the flame away from the potentially flammable material. However, the lantern can malfunction or be swept by wind, bringing it into contact with dry vegetation or flammable materials on the ground.

In 2013, a man in US state of Washington started a 500-acre (202-hectar) wildfire after his sky lantern floated into a hillside. In the same year, 13 UK firefighters were injured in a huge fire which saw 100,000 tons of plastic recycling material burst into flames in Birmingham. At the time, authorities said the blaze was caused by a lantern landing in the depot. In 2018, UK farmers, animal rights activists, and lawmakers decried the use sky lanterns after one of them landed on a horse and set its tail on fire. Most recently, German investigators said that floating lanterns caused a New Year's Eve fire which killed monkeys and apes in the Krefeld Zoo.

In addition to fire risks, the lanterns' wire frames also pose a risk to the environment and animals. Animal rights activists claim birds often get entangled by metal components, while larger animals try to eat the remains. Bits of metal can end up in cattle feed, killing the animals, according to the Royal Society for the Prevention of Cruelty to Animals (RSPCA).

Air traffic experts also warn of risk to aircraft – according to Irish Aviation Authority (IAA), the flight path of sky lanterns are hard to predict, and the items could become "a risk to aviation" if sucked into a plane engine.

Irish officials say that the risk of collision is "small" but urge the public not to release sky lanterns within 10 nautical miles (18 kilometers, 11.5 miles) of an airport. The items should also not be tied together or launched in groups of more than 20.