US Secretary of State John Kerry has met Russian President Vladimir Putin as part of an effort to salvage the stalled Syria peace process. The pair discussed cooperating against Islamic State and other militant groups. 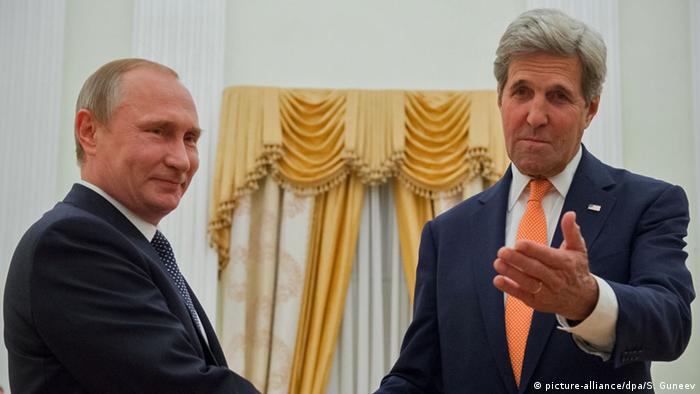 Kerry met Putin on Thursday evening with a proposal to boost military and intelligence cooperation against "Islamic State" (IS) and al-Qaeda's affiliates in Syria.

In exchange, Washington hopes it can make Russia persuade Syrian President Bashar al-Assad to ground his planes and halt attacks on civilians and moderate opposition groups.

The three-hour meeting broke up at 1 a.m. local time, and the two gave little away. However, US State Department spokesman John Kirby said Kerry had expressed concern about repeated violations of the cessation of hostilities by the Syrian regime.

"The two also discussed the need to need to increase pressure on terrorist groups like Daesh and the al-Qaeda affiliate in Syria, Jabhat al Nusra," said Kirby.

The self-styled "Islamic State" has lost territory equivalent to the size of Belgium over the past 18 months, a UK think tank has said. But the report warns the group is refocusing on mass attacks outside its territory. (10.07.2016)

The family of American journalist Marie Colvin, who died in Syria in 2012, has filed a wrongful death lawsuit in a US court. They accused the Syrian government of deliberately killing her. (10.07.2016)

Damascus has extended a ceasefire for 72 hours, marking the second of its kind since the end of Ramadan. The US' top diplomat is expected in Moscow as the international community pushes to revive stalled peace talks. (11.07.2016)

Russia, US shore up Syria ceasefire

The Syrian army has extended a truce around the besieged city of Aleppo. Moscow and Washington have vowed to extend their efforts to see a ceasefire implemented across the whole country. (10.05.2016)

Amnesty International says some Syrian opposition groups are carrying out abductions, torture and summary killings. The rights group called on international backers to stop sending arms to some Syrian rebels. (05.07.2016)

Earlier, Putin said a telephone call with US President Barack Obama had led him to believe Moscow and Washington shared common interests.

"My last conversation with President Obama has convinced me that we are indeed striving not only to establish a process of cooperation but also to achieve important results."

Sitting across from him, Kerry agreed Obama had found the recent telephone call "constructive." The Secretary of State said he and Obama believed that Russia and the US were in a position to make "an enormous difference" when it came to both Syria and Ukraine.

On Friday, Kerry was scheduled to hold more detailed talks with his Russian counterpart Sergey Lavrov.

Joint base in Jordan?

Citing a draft proposal by the US, The Washington Post reported that the US and Russia could set up a joint command and control center in Jordan, which would direct intensified air strikes against al-Nusra. The jihadi group is mainly fighting Assad's forces, and Washington appeared to play down the significance of any military offer.

The US and Russia, and the 22-nation contact group they co-chair, have urged a nationwide ceasefire and Geneva-based talks on a "political transition."

A landmark partial ceasefire was brokered in February, but it did not include IS or Al-Nusra. That fragile peace has since all but collapsed.

UN Syria envoy Staffan de Mistura urged Moscow and Washington to press for talks to resume next month. De Mistura said the talks "have a target date of August" and would have to be "a credible beginning of a roadmap towards a political transition."