Three major TV stations were shut down for "illegally" broadcasting Raila Odinga's mock "swearing-in" ceremony. Journalists slept in the newsroom overnight for fear of being arrested. 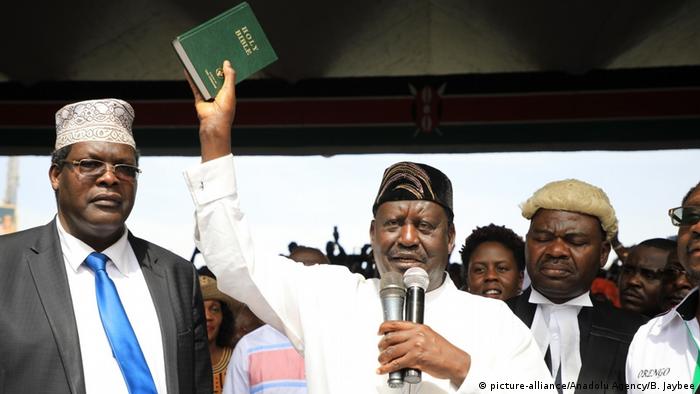 The High Court of Kenya has ordered the government to restore the transmission of the country's top three TV stations. The court ruling temporarily reinstates the stations while the court case to challenge their shutdown is processed.

The government had pulled the plug on Tuesday on Kenya Television Network, Citizen Television and Nation Television News (NTV), after they attempted to broadcast the opposition leader Raila Odinga's mock inauguration.

Odinga was defeated in the October 2017 presidential run-off by President Uhuru Kenyatta, a result that Odinga has not accepted. The opposition leader said he believes he won the vote and led Tuesday's "swearing-in" event in protest, declaring himself "the people's president". The High Court upheld the result that favored Kenyatta in November 2017.

Kenyan Interior Minister Fred Matiang'i accused media organizations of carrying out an "illegal act" that put thousands of Kenyans' lives at risk. He said the stations were under investigation for their alleged role in an attempt to "subvert and overthrow" Kenyatta's government.

Journalists fear for their safety

The shutdown of the three TV stations in Kenya shocked journalists, who were used to operating freely.

Larry Madowo, an NTV news anchor was outraged by the move,

"This is clearly a slide to dictatorship. It's a return to a repressive period we had forgotten about," he told Reuters news agency. "We are becoming another African country with these kinds of issues."

His colleague Linus Kaikai confirmed that editors had received the warning from the authorities of a potential shutdown if they covered the Odinga event.

Three NTV journalists opted not to leave the newsroom on Wednesday night, warned by security sources of their imminent arrests. They reported seeing plainclothes police officers loitering outside the building.

"We were doing our job, we had the right to do this, and if I was to do it again, I'd do it the same way," NTV senior anchor and reporter Ken Mijungu said.

As a result of the mock swear-in, the Kenyan government cracked down on the opposition, declaring the movement a "criminal organization" and investigating individuals it deemed "conspirators." Police arrested Tom Kajwang, an opposition lawmaker who administered Odinga's "oath."

Kenya's government has said the fake inauguration of opposition leader Raila Odinga was an "attempt to overthrow" the government. TV stations have been closed amid an investigation into the "swearing-in" ceremony. (31.01.2018)

President Uhuru Kenyatta begins his second term as leader of Kenya. But contested elections and months of political violence have cast doubt on his legitimacy and raised tensions in the capital. (28.11.2017)

Kenya opposition leader Raila Odinga has sworn himself in as "president of the people." The government responded by declaring the opposition National Resistance Movement a criminal group. (30.01.2018)

Kenya's top court has cleared the way for President Kenyatta to serve a second term. But low voter turnout and threats against the judges have left critics doubtful that his claim to the presidency is legitimate. (21.11.2017)

Kenyans are lining up to vote for their new president. According to pollsters, it's a two-horse race between Deputy President William Ruto and his main challenger Raila Odinga — a long-serving opposition leader.