Kenya opposition leader Raila Odinga has sworn himself in as "president of the people." The government responded by declaring the opposition National Resistance Movement a criminal group. 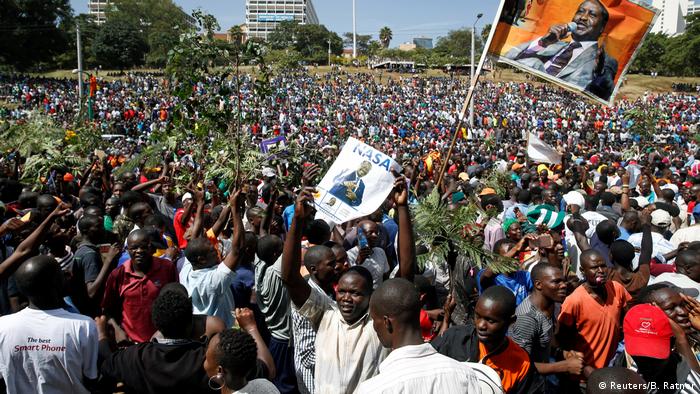 Opposition leader Raila Odinga took an oath of office as what Kenya's opposition coalition has named the "president of the people." "I, Raila Omolo Odinga, do swear that I will protect the nation as people's president, so help me God," he said. His running mate, Kalonzo Musyoka, who was supposed to be sworn in as his deputy, did not appear at Odinga's side.

Thousands of opposition supporters had gathered in Nairobi's Uhuru Park on Tuesday for the staged inauguration. Authorities had initially warned the opposition to not gather in the park, but security forces remained at a distance and allowed the ceremony to go ahead. Following the ceremony, the government issued a notice declaring the opposition's National Resistance Movement illegal.

The event comes two months after President Uhuru Kenyatta was sworn in for a second term following an election rerun in October. Odinga insists that the vote was stolen from him, and that he — not Kenyatta — is Kenya's rightful leader.

A number of television and radio networks that had planned to broadcast the opposition's ceremony reported that government authorities had forced them off the air, although many continued to stream live online. The attorney general has also warned Odinga that he could face treason charges forr the stunt.

The East African nation plunged into political crisis last year after the Supreme Court annulled an August election, won by Kenyatta, and called a fresh vote.

Odinga, 72, boycotted the rerun, alleging that the poll would not be free and fair. Ever since, he had vowed to hold his own swearing-in ceremony in protest. His National Super Alliance (NASA) coalition has also sought to undermine Kenyatta's legitimacy by setting up parallel government structures.

Ahead of the "inauguration," NASA announced in a statement that it planned to hold "a peaceful event, in total compliance with the constitution and the law."

On Tuesday morning, at least three broadcasters were taken off air for their planned coverage of the ceremony.

"This morning, officials from the communications authority accompanied by police officers went to a transmission station and disconnected our transmission. So we're currently off air on Citizen TV, Inooro TV and some of our radio stations," Citizen TV managing director Waruru Wachira told DW.

Earlier, the Kenya Editors Guild reported that authorities had summoned editors and warned their publications could be shut down if they covered the event.

Dozens of people were killed in clashes between Odinga supporters and police during last year's election turmoil, and some observers fear that Tuesday's ceremony could lead to a fresh outbreak of violence.

The nonprofit International Crisis Group warned in a statement that the action could "provoke protests, further police crackdowns and much avoidable destruction and bloodshed, while deepening already dangerous levels of polarization."