President Uhuru Kenyatta begins his second term as leader of Kenya. But contested elections and months of political violence have cast doubt on his legitimacy and raised tensions in the capital.

Protests in Kenya as the president is sworn in: Kathryn Omwandho from Nairobi

Kenyan President Uhuru Kenyatta has been sworn in for a second five-year term on Tuesday, bringing an end to a bitterly contested election season marred by street protests and police violence.

Supporters of the 56-year-old Kenyatta arrived in their tens of thousands at a Nairobi sports stadium, where the ceremony took place, wearing the colors of the ruling Jubilee party and waving Kenyan flags.

A military band in blue and gold uniforms serenaded heads of state from several African nations, including neighboring Ethiopia, South Sudan and Uganda.

"I do swear that I will always truly and diligently serve the people of the Republic of Kenya," Kenyatta said, placing his hand on the same Bible that his father, founding President Jomo Kenyatta, took oath with more than 50 years ago. 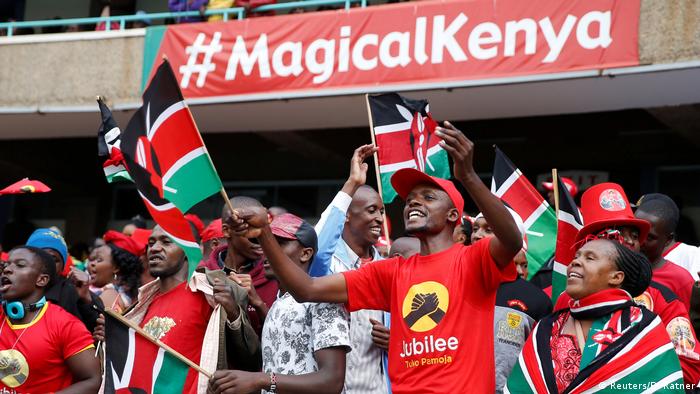 Tensions remained high as security forces stepped up patrols in the capital Nairobi and sealed off an area where the opposition planned to hold a prayer protest, leading to running battles between police and opposition supporters.

Police patrolled the Jacaranda grounds where opposition leader Raila Odinga had called on supporters to gather for a "memorial rally" to honor the scores killed during recent months of political upheaval. They used tear gas to disperse protestors and prevent the rally.

Less than an hour after Kenyatta was inaugurated, Odinga told an impromptu rally elsewhere that he would be sworn in as president on December 12 instead.

But shortly after he spoke, riot police teargassed the convoy and charged the crowd.

Security forces around the 60,000 capacity stadium where the ceremony took place also used tear gas and batons to prevent excess crowds of Kenyatta supporters from entering. 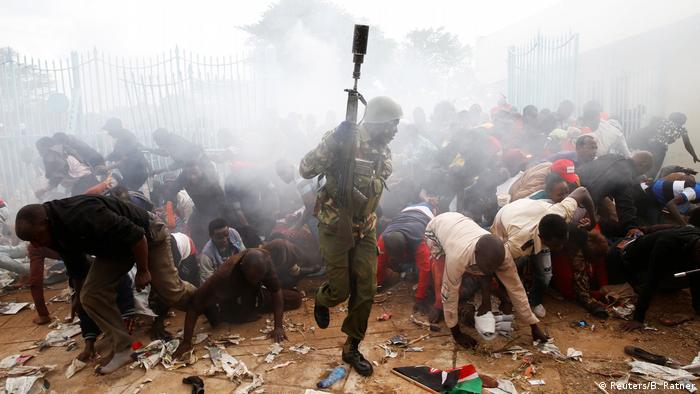 What were the key points of the speech?

In October Kenyatta won a repeat round of presidential elections, taking home a landslide 98% of the vote. But turnout was only 39%, after his rival Odinga boycotted the election amid fears it would be neither free nor fair.

The first presidential poll, in August, was annulled by Kenya's Supreme Court, who cited "irregularities and illegalities" and ordered a rerun. But Odinga urged his supporters not to take part because electoral commission reforms had not been sufficient.

Fifty-six people have died in the four months of unrest since the initial elections, according to an AFP tally. Human rights groups say most of the victims were killed by police.

"A return to the political backwardness of our past is more than unacceptable. It is intolerable... This divide cannot be bridged by dialogue and compromise," Odinga's Nasa party said in a statement.

Rashid Abdi, an analyst at International Crisis Group, said the crisis highlighted a "growing gulf" between the elite and ordinary people.

"Kenyatta comes to office saddled with a deeply divided country, polarised along ethnic and regional lines, and unless he changes tack the likelihood is we will see serious crisis," said Abdi.

Kenyan President Uhuru Kenyatta is set to begin his second term in office. Here's how the tumultous events developed since the election campaign in August. (28.11.2017)

Protests in Kenya as the president is sworn in: Kathryn Omwandho from Nairobi