Kashmir's environmentalists work in the shadow of violence and climate change

Illegal construction, timber smuggling and a decades-long conflict have degraded Kashmir valley's forests. But locals are stepping in to protect the unique nature of their home in the Himalayas. 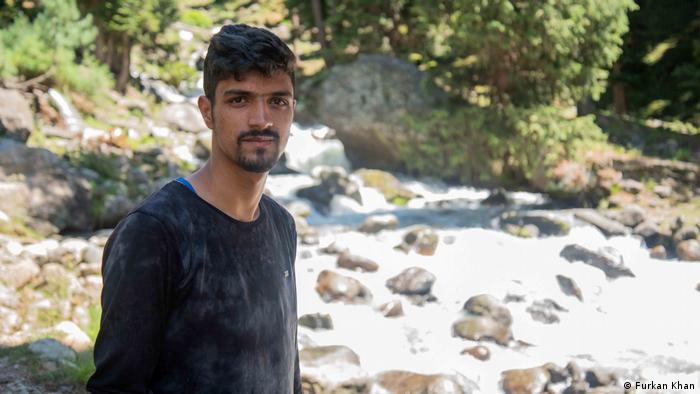 Sartaj Ahmad Magray is a 21-year-old trekking guide in Pahalgam, a resort valley nestled in the folds of the Great Himalayas. During the summer months, his clients come to hike the green slopes and take in views of sparkling blue glacial lakes.

But today, Magray (pictured above) is taking a different kind of a trek. Along with a group of boys from his village, he's volunteering to collect trash left behind by tourists along walking routes.

Burlap bags in hand, the boys get to work cleaning up a waterfall surrounded by lush pine forests. This is just one of his many short local clean-up excursions, but each year Magray and his friends make multiple climbs to gather litter from trekking routes at heights of up to 3,000 meters (9,842 feet).

"We do this, because we think it is for our benefit. Those places are so high up, no one cleans there," he says. "The government does not pay attention." 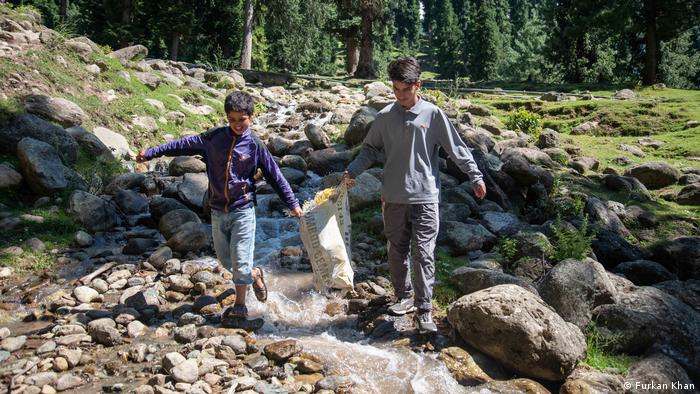 Majid Magray, 12, and Waseem Ahmed, 16, help out on Magray's clean-up treks. Here they carry trash down from their local waterfall

Pahalgam is in Kashmir Valley in the disputed region of Jammu and Kashmir, along the India-Pakistan border. Its coniferous forests and wetlands are home to bears, Himalayan marmots and vulnerable species found nowhere else in the world, such as the orange-breasted Kashmir flycatcher bird and the Kashmir stag.

The region's networks of glaciers, rivers and lakes don't just support this rich array of wildlife, they also supply water to billions of people in Asia. And despite decades of conflict related to a territorial dispute between Pakistan and India, the valley's vibrant beauty brings tourists from around the world. While that provides employment opportunities for locals like Magray, it also has environmental impacts. 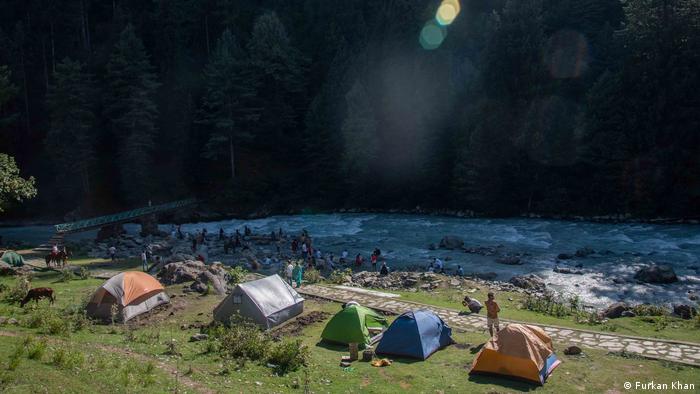 Tourists camp around and enjoy in the waters of river Lidder, that flows through the valley of Pahalgam

Pahalgam's resorts and hotels are encroaching on forest and putting pressure on wildlife, says local environmentalist Mushtaq Ahmad Magrey, also known as Mushtaq Pahalgami. There are already over 200 hotels and resorts in the area, according to official figures.

Pahalgami founded the Himalayan Welfare Organization in 2008 to campaign for cleaner and greener resorts in Kashmir. He supports Magray's clean-up treks and has been pushing against the use of plastic in his village.

But perhaps his biggest battle is against developers. And he has succeeded in getting the authorities to demarcate and fence off areas of forest protected from construction.

"A rich class of people wanted to overtake this land, but because this has been fenced off, they can't do much now. This is hundreds of acres of land," Pahalgami says, climbing cast iron stairs into a forested area where he has been planting pine, walnut and apple trees. 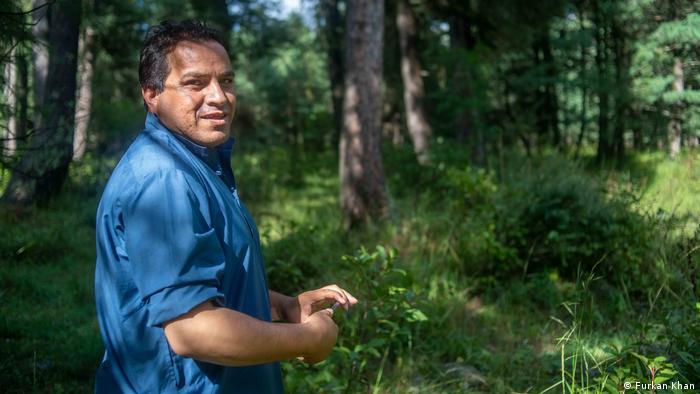 Mushtaq Pahalgami, 39, stands in front of forest land that he tends to 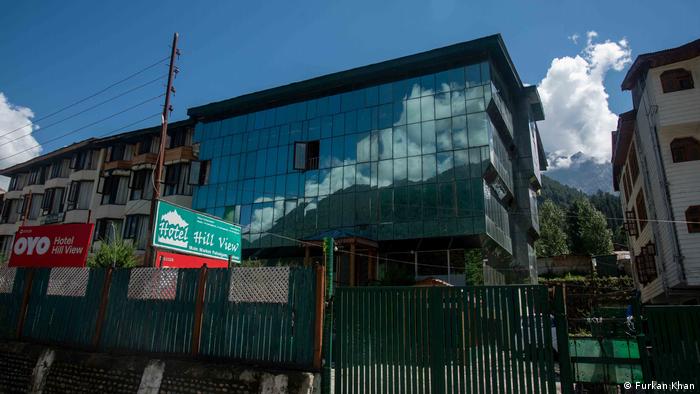 There has been a moratorium on new construction in Pahalgam since 2010. Yet hotels, cottages and tourist facilities continue to pop up and encroach on forest, according to local media reports. Pahalgami has had his work cut out bringing developers to court to challenge these constructions.

After one court hearing, he was physically assaulted. He's unsure who attacked him but believes it was connected to his activism. Still, he's undeterred. "If I get scared, I won't be able to get anything done. And I can't let that happen," he says.

Decades of conflict, political turmoil, and a weakened government in the disputed region have already damaged forests. With the local administration focused on security, illegal logging and timber smuggling occurred without much resistance.

But with a growing population requiring homes, wood for fuel and land for farming and livestock, forests across Kashmir have come under increasing pressure . And now they could face new threats due to recent government decisions that would make it easier to divert forest land for development.

Farooq Geelani, the Chief Conservator of Forests for Kashmir Valley in the local forest department, says past policies aimed at boosting the local economy, such as haphazard changes in land-use from agriculture to construction, have taken a toll on the environment, but insists that the local authorities are waking up to these effects and trying to strike a balance now.

"Development and environment are always at loggerheads and some forest lands will have to go. But it is not that much land and when it is allowed, a compensation is levied, which is funneled back into tree plantation," Geelani says.

Abdul Hamid Bhat runs a successful business repairing and selling cars in Jammu and Kashmir's summer capital of Srinagar and is no stranger to the environmental disruption development can bring. Remembering the city as a much greener place when he was a child, Bhat has set out to plant a million trees in this lifetime.

"Whenever I visit a place or happen to see any area where deforestation has taken place, I make it a point to plant trees there," Bhat says. 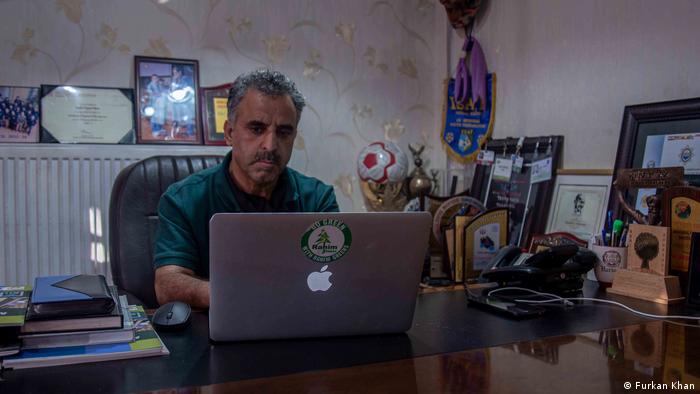 Abdul Hamid Bhat, 55, sits in the office above his workshop, surrounded by photos of plantation drives and awards he's received for his work

Bhat holds plantation drives across Srinagar and its outskirts, buying hundreds of saplings with his own money, and planting them out in areas that have been affected by deforestation. He gifts saplings to his clients and business partners, too, hoping to pass on his passion for reforestation.

"What I do is very miniscule. It might not even be visible, but I want to raise awareness and motivate other businessmen to work for the environment," he says.

For all the efforts being made by locals to preserve Kashmir's green landscapes, a greater environmental crisis looms over the entire region: The iconic Himalayan glaciers that draw tourists and are a vital source of water to billions in the region are themselves under threat from the climate crisis.

"These glaciers are called the water tower of Asia, or the third pole," says Shakil Ahmed Romshoo, a geographer at Kashmir University. "In the last 50 years, we have lost almost 23% of the glacial cover."

Romshoo is one of very few scientists working in the region, where experts say a lack of data is hampering climate studies. 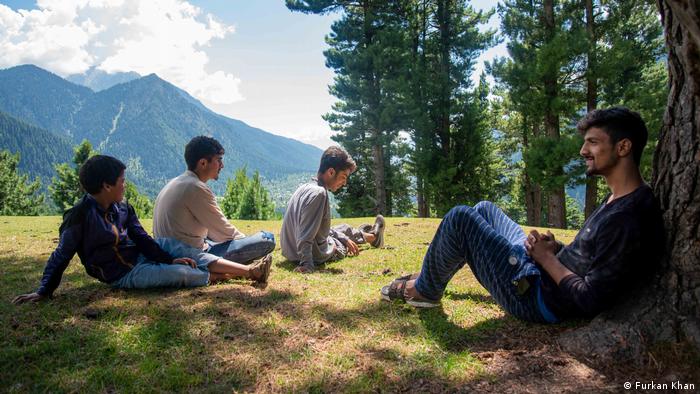 Magray and the other volunteers take a break from collecting trash

Over the years, frequent gun battles, intermittent curfews, lockdowns and communications restrictions have made it difficult for scientists to conduct field work there, according to Romshoo.

Trekking guide Magray continues his clean-up work in the midst of it all. Taking a break from his trash collection, he rests in the shade of a tree and looks up at the white peaks above. He says he didn't learn about climate change at school, but he was raised to value the unique splendor of his mountain home.

"Our elders, well-educated people, taught us the benefits of keeping the place clean," Magray says. "You tend to understand it yourself too, over time."