For her moving images of the conflict in Kashmir, Masrat Zahra has been named the winner of the 2020 Anja Niedringhaus Courage in Photojournalism Award. The jury praised her work for its sense of "dread and community." 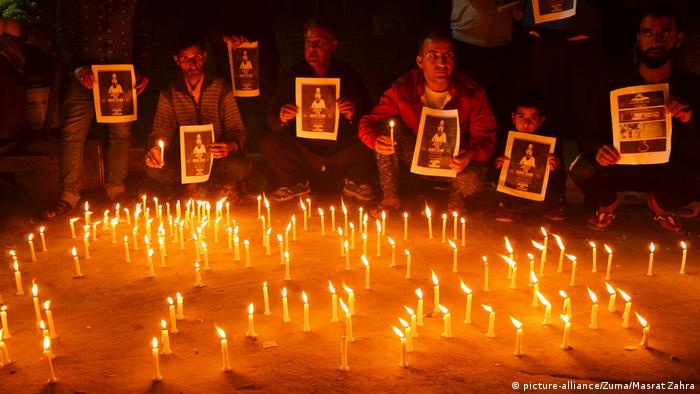 The International Women's Media Foundation (IWMF) named Masrat Zahra as the winner of this year's Anja Niedringhaus Courage in Photojournalism Award on Thursday.

The freelance photojournalist's images depicting conflict in Indian-controlled Kashmir and its toll on local communities were praised by the jury for their "humanity" and her particular focus on the stories of women.

Zahra, who was born in the city of Srinagar, provides an emotional insight into daily life inside Indian-controlled Kashmir with her photographs, which the jury described as filled with a sense of "dread and community."

The award honors the memory of German photojournalist Anja Niedringhaus, who was killed in 2014 in Afghanistan. The $20,000 (€17,500) prize is awarded annually by the IWMF, which since 1990 has been fighting for press freedom and supporting courageous female journalists.

"Countless communities around the world are facing enormous threat, harm and censorship due to governmental threats and the declining state of press freedom worldwide," said IWMF Executive Director Elisa Lees Munoz. "During these times, Anja's legacy reminds us that it's the communities beneath the headlines who are the true targets of civil and social brutality." 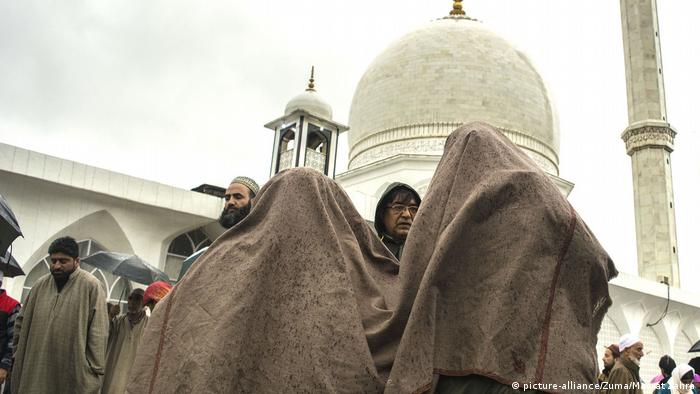 Zahra's pictures provide a glimpse into the everyday lives of people living in Kashmir, which sees regular internet shutdowns and where thousands of civilians have been killed in fighting since 1989.

In one of her photos, a woman and two children carefully maneuver around rolls of barbed wire in the street. In another, a member of India's security forces gestures at a young schoolgirl with his gun. 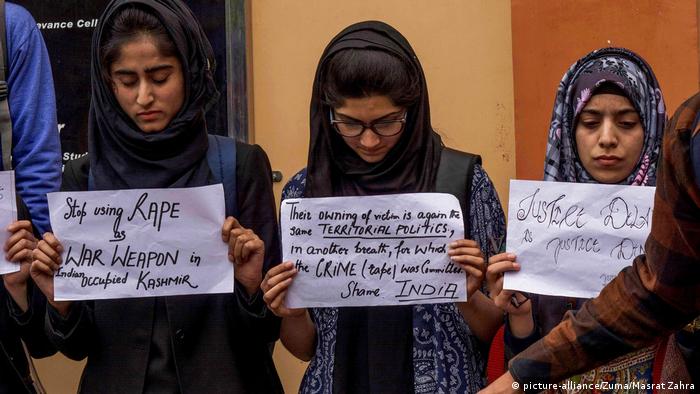 Masrat Zahra's photo of Kashmiri student protesters hold placards during a protest against the rape and murder of a eight year old Muslim girl in Srinagar.

As one of a few women photojournalists working in Kashmir, Zahra is frequently harassed and has frequently been labeled a threat to the Indian government. She is currently being investigated for photographs she posted on social media and could face a fine of up to seven years in prison, IWMF said in a statement.

Zahra said receiving the award "shows that the work of journalists like me coming from small places is being acknowledged."

"I hope this honor will encourage me to perfect my skills and do my work more confidently. I also expect it to inspire other women photographers who are working in difficult environments," she added. 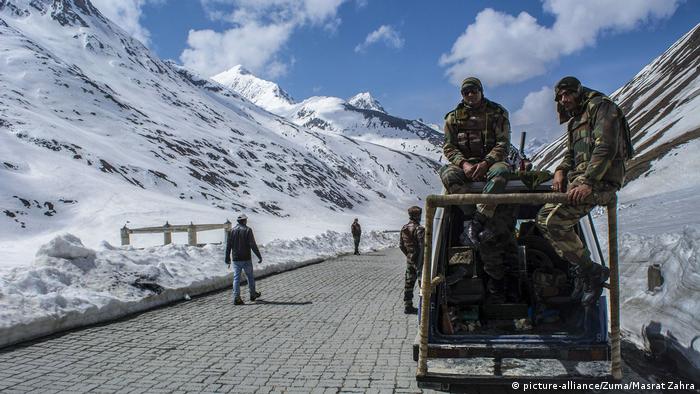 This year's award also honored the work of two other women photojournalists from Hong Kong and Puerto Rico.

Freelance photojournalist Laurel Chor was named as an honoree documenting the pro-democracy protests in Hong Kong. She has also covered a range of political and cultural topics across the region, including the Rohingya refugee crisis.

Puerto Rican freelance photojournalist Nahira Montcourt was also honored for her reporting on natural disasters, protests and social unrest in the US territory.

"Our winner and honorees this year exhibited stunning emotion, dynamic composition and most significantly, put themselves in direct contact with those experiencing immediate suffering, at immense personal risk," this year's jury said in a statement.

"These portfolios are not easy to create, and these women crafted haunting and lasting narratives of their own communities, bringing the world into their stories."

Eloisa Lopez has been named the winner of this year's Anja Niedringhaus Courage in Photojournalism which honors brave women photojournalists, in memory of the German photojournalist who was killed in Afghanistan in 2014. (30.04.2019)

Photojournalist Andrea Bruce has captured intimate moments of ordinary life in Syria, Iraq and elsewhere. Now, she is being honored for her work with this year's Anja Niedringhaus Award. (14.04.2018)

A child bride standing defiantly beside her husband, or girls who have escaped from Boko Haram: Stephanie Sinclair's sobering portraits of them have earned her the 2017 Anja Niedringhaus Courage in Photojournalism Award. (20.04.2017)