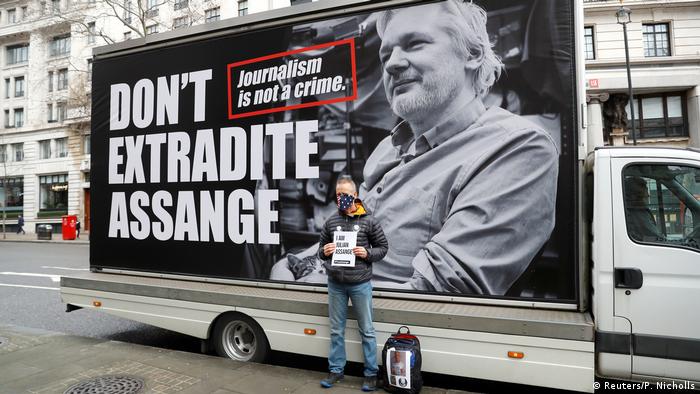 A London court on Monday began hearing the case for the extradition of Wikileaks founder Julian Assange to the United States, a day after hundreds of protesters marched through the British capital demanding his release.

In their opening remarks, both the defense and the prosecution teams laid out their cases.

Assange's lawyer, Edward Fitzgerald, said his client should not be extradited as he would not get a fair trial and would be a suicide risk. Fitzgerald said sending him to the US would expose Assange to inhumane and degrading treatment, as well as disproportionate sentence and prison conditions.

Fitzgerald added the extradition request was motivated by politics. The indictment was brought, "not on the basis of new revelations, but because it had become politically expedient and desirable," Fitzgerald said.

He said the United States' attitude to Assange had changed when Donald Trump came to power and that the president wanted to make an example of the 48-year-old.

Fitzgerald said in 2013 the US government under former President Barack Obama had decided that Assange should not face
any action. But that in 2017, after the 2016 election of Trump, an indictment was brought against Assange.

Why the change? "The answer is President Trump came into power with a new approach to freedom of speech and a new
hostility to the press amounting effectively to declaring war on investigative journalists," Fitzgerald said.

The US government began outlining its case against Assange on Monday by arguing that the WikiLeaks founder is not a free-speech champion but an "ordinary'' criminal who put many lives at risk with his actions.

Lawyer James Lewis, representing the US government, called WikiLeaks' 2010 document deluge "one of the largest compromises of classified information in the history of the United States.''

"Reporting or journalism is not an excuse for criminal activities or a license to break ordinary criminal laws," he added.

The 48-year-old Australian is accused of publishing secret documents and violating anti-espionage law in the US, and faces up to 175 years in prison if convicted.

Washington has sought his extradition for years. Assange has fought being transferred to the US since he was arrested in April last year.

A decision by the London court is not expected before May 18.

'Journalism is not a crime'

In 2010, Wikileaks published hundreds of thousands of secret papers on the internet, mainly pertaining to the Iraq war.

The papers contained sensitive information about US operations in the country, including the killing of civilians and the mistreatment of prisoners.

Assange, his lawyers, and supporters argue that the whistleblower activist would not receive a fair trial in the US.

The Council of Europe's human rights commissioner Dunja Mijatovic has also urged Britain not to hand him over, saying that press freedom and the rights of whistleblowers are at stake.

"The broad and vague nature of the allegations...are troubling as many of them concern activities at the core of investigative journalism in Europe and beyond," Mijatovic said.

Hundreds of people including Roger Waters, the co-founder of the rock band Pink Floyd, marched through London on Saturday in a show of support for Assange. A number of prominent German politicians and intellectuals also signed an open letterappealing for his release earlier this month.

Protesters carried signs that said, "Free Julian Assange," and "Journalism is not a crime."

Assange's father John Shipton addressed the crowd. He said the long confinement had damaged his son's health and that extraditing him the US would be the same as a death sentence.