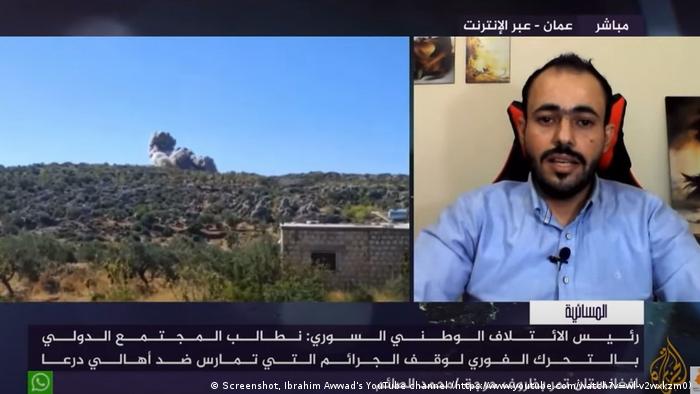 Earlier this month, a Syrian journalist working in Jordan was apparently arrested. Freelance journalist Ibrahim Awwad was taken to Azraq, a United Nations-run refugee camp, east of Amman, where he remains under house arrest.

"He is now threatened with deportation to Syria, where he would face probable reprisals," said media advocacy group Reporters Without Borders (RSF), expressing concern about the incident in a statement last week.

In October, the NGO Human Rights Watch (HRW) released a report showing that refugees who returned to Syria were in danger of torture, imprisonment and other abuses.

It remains unclear exactly why Awwad — who is in his early thirties and has been in Jordan with his family since 2015, when he fled civil war in his own country — was taken to the camp. The journalist had been covering Syrian affairs for the likes of Qasioun, a Syrian news agency based in Turkey, and had also appeared on the broadcast networks, Al Jazeera and Syria TV, the latter a pro-opposition channel, also based in Turkey. 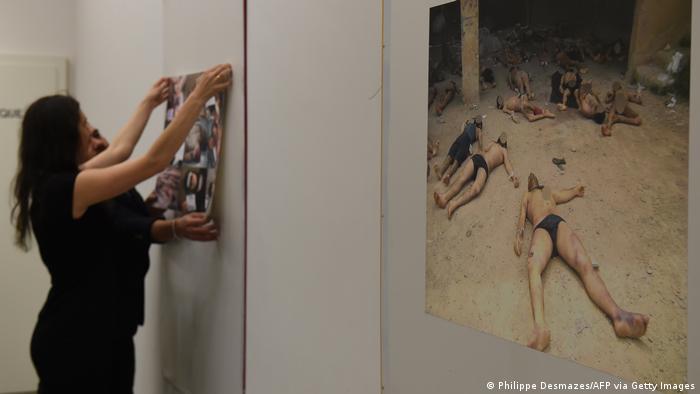 No going back: The infamous 'Caesar' photos show victims of torture by the Syrian government

When reached on the phone by Arabic-language magazine Al Qabda, the journalist and father of two said he was being treated well in the camp.

"When I tried to ask about the reason for my arrest, one of the officers present explained to me that he didn't know … because there is no clear violation in my record and he concluded by saying the phrase 'orders from above,'" Awwad told the magazine.

In a statement emailed to DW, the Jordanian government insisted that Awwad had not been arrested nor was he in danger of being expelled from the country. "No decision [was] taken to deport him," Haitham Abu Alfoul, a spokesperson for the Jordanian Foreign Ministry, wrote. Abu Alfoul did not expand upon the reasons for Awwad's removal to the refugee camp, other than to say Awwad "was informed that he must respect the laws and not engage in external activities that are inconsistent with his status and rights as a refugee."

The lack of any clear motivation for Awwad's arrest has led to the theory that an increasingly cozy relationship between Jordan and Syria is behind his detention.

"Awwad's arrest comes at a delicate time, following a visit by a Syrian ministerial delegation in late September that led to the restoration of bilateral cooperation," Reporters Without Borders said in its statement. 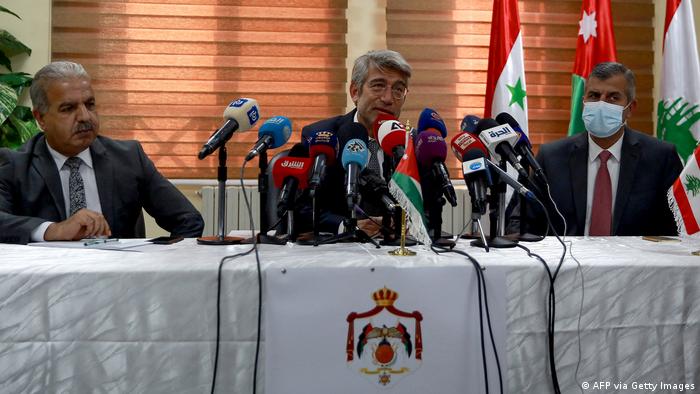 In October, the energy ministers of Syria, Lebanon and Jordan (left to right) agreed on an electricity deal

Jordan has generally had a phlegmatic relationship with Syria. Back in 2011, when the Syrian revolution began, Jordan supported protests against the Syrian government led by Bashar Assad. In fact, Jordan's King Abdullah II was the first Arab leader to call on Assad to step down peacefully. Since then, it is estimated that as many as 1.3 million Syrians have sought refuge from civil war in Jordan.

Most recently though, Syrian-Jordanian relations, frozen since 2011, have thawed. In September and October, Jordan helped broker regional energy deals to deliver gas and electricity to Lebanon via Syria; a move supported by the US and seen as a way to stifle Iranian influence. In September, the Syrian defense minister also visited his counterpart in Jordan.

With regard to Awwad's case, another Syrian reporter, Fared al-Mahlool, who is based in the opposition-held area of Idlib in northwestern Syria, said he believed a senior Syrian military officer had asked for Jordan's help in shutting down Syrian opposition voices.

This is not the first such case of Jordanian security forces harassing Syrian journalists and activists who sought refuge there, however.

Last summer, a news organization called Syria Direct left its base in Amman to relocate to Germany. Syria Direct was staffed mainly by Syrian refugees in Jordan. The publication did not respond to DW's request for comment but other news reports, quoting donors to the publication, have suggested that it was harassed by Jordanian security forces.

In other cases, Jordan has threatened to deport Syrian activists, or Syrian journalists were told their residency papers or work permits were not in order and that they must move into refugee camps.

But not every Syrian journalist is targeted in this way, Mansour Omari, a Syrian researcher based in Sweden, told DW. It is usually only those who have published something to displease the Jordanian government. 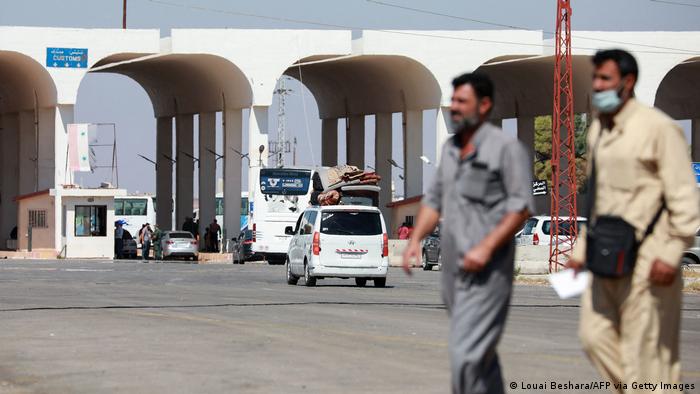 In September, Jordan and Syria reopened a southern border crossing that had been closed due to fighting

So could Jordan be doing the Syrian government's dirty work, as some activists have suggested?

"I wouldn't go as far as to say that," argued Sabrina Bennoui, who heads Reporters Without Borders' Middle East desk. "I would just say that the context is different now."

It is important to remember that Jordan doesn't have a free press in the first place. This year, the US-based pro-democracy organization Freedom House ranked the country as "not free," noting that "media and civil society groups are hampered by restrictive laws and government pressure."

Reporters Without Borders put Jordan at 129 out of 180 countries for press freedom in 2021, pointing out that local media often self-censor.

"Jordanian journalists know what the 'red lines' are. But if you're Syrian, you have even more 'red lines,'" said Mansour Omari, who monitors the state of Syrian exile journalism for organizations like Reporters Without Borders. It is the same in every neighboring country where Syrian journalists have sought refuge, he said. "If the situation changes — for example, as the Syrian and Jordanian governments develop better relations — then there's a new 'red line' to learn about."

"Most Syrian journalists in Jordan don't cover domestic issues," Bennoui added. It's just that, because of the changing relationship, the Syrian issue has become more of a domestic issue for Jordan. Additionally, coverage of what is happening in the southern Syrian city of Daraa, near the Jordanian border, also has internal security implications for Jordan, Bennoui pointed out. 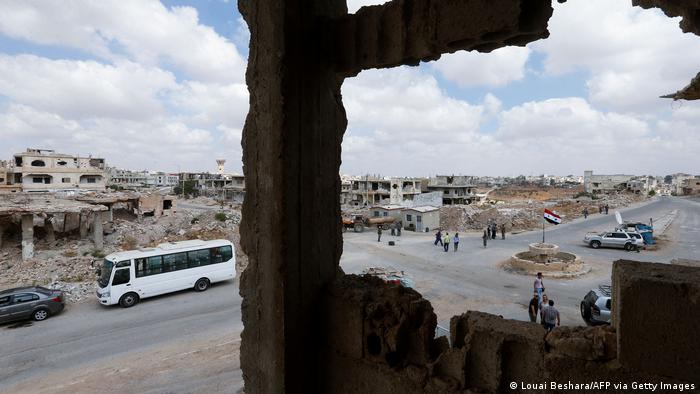 Security in the southern city of Daraa, near the Jordanian border, has become an important issue for Amman

"After Awwad's arrest, we contacted several other journalists in Jordan to see if there had been threats against others, too," as Yara Bader, head of the Media and Freedoms Unit at the Paris-based Syrian Center for Media and Freedom of Expression, told DW. "But as far as we can see, it's just Awwad and probably because of the type of report he was working on."

The German-Syrian Aid Association (VDSH) in Berlin, an umbrella group representing over 20 different Syrian aid organizations in Europe, also checked with leading Syrian activists in Jordan for DW and came back with similar conclusions.

Nonetheless, the Awwad case has what is described as a "chilling effect" on free speech, researcher Omari explained, noting that other Syrian journalists in Jordan will see the arrest and recognize new red lines. "Now they know that if they talk about the new energy deal or the rehabilitated relationship, they might be threatened."

Without further details it is impossible to know if Jordan is sharing information with Syrian officials. However, it is increasingly clear to Syrian exiles that life could become more difficult in Jordan thanks to the creeping détente between the two nations.

"Certainly this is related," Mansour Omari told DW. "The better the relationship between them gets, the more Syrians will be harassed. Any new cooperation will determine the new situation for Syrians in Jordan."

This article has been amended to include a statement from the Jordanian Ministry of Foreign Affairs.

Microsoft to buy Call of Duty maker for $68.7 billion