How the US and Iran compete to fuel Lebanon | Business | Economy and finance news from a German perspective | DW | 23.09.2021

How the US and Iran compete to fuel Lebanon

Hezbollah has imported fuel from Iran to supply Lebanon, while the US wants to power Lebanon with Egyptian gas and Jordanian electricity. The energy race between the geopolitical rivals has implications for the region. 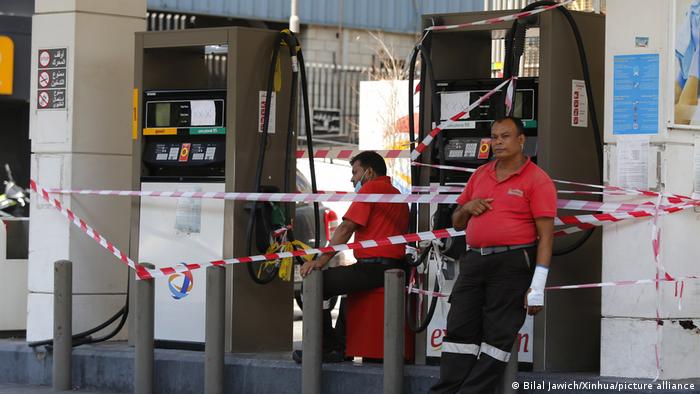 Closed fuel stations have become a common sight across Lebanon

Lebanon has been mired in economic crisis since 2019. Recently, a severe fuel crisis has gripped the country and has exacerbated the situation considerably.

The fuel shortages hit so hard that a fuel crisis soon became a humanitarian crisis. Lebanese citizens found themselves lining up for hours at petrol stations to receive limited rations of fuel, the price of which has skyrocketed.

Generators, starved of diesel, provided fewer hours of electricity to houses and businesses. Even hospitals were deprived of power.

With the government struggling to manage the crisis, Hassan Nasrallah, the political leader of the Iran-backed Shiite militant group Hezbollah, announced in August that Iranian fuel would be brought into Lebanon.

The first two shipments arrived via Syria on September 16 and 17. Several videos and pictures posted on social media showed people celebrating the arrival of the fuel convoys. A third shipment is expected to arrive this week.

The delivery was not officially approved by the government. The trucks entered via an illegal crossing which violates US sanctions against Iran. So far, the US has not tried to block the shipments.

US counterproposal to contain Iran's influence

The US didn't sit back. Following Nasrallah's announcement, the US ambassador to Lebanon, Dorothy Shea, revealed that the United States was working closely with the governments of Egypt, Jordan and Lebanon, along with the World Bank, to find sustainable solutions for Lebanon's fuel and energy needs.

On September 8, the US-backed effort to satisfy Lebanon's energy needs took place in Amman, Jordan, where ministries from Egypt, Jordan, Lebanon and Syria outlined a road map to pipe Egyptian natural gas to Lebanon via Jordan and Syria through the Arab Gas Pipeline (AGP). Another part of the plan involves providing electric power to Lebanon from the Jordanian grid.

Although the US proposals would not alone be enough to satisfy market demand, Roudi Baroudi, chief executive of the consultancy Energy and Environment Holding, told DW that the proposals were good ideas as they could increase the supply of electricity to the country.

He explained that, though the AGP is ready for use, the electric cables passing through Damascus were heavily damaged during the Syrian civil war and needed to be repaired. "The gas from Egypt will be sufficient for 8-10 hours per day. Electricity from Jordan and Syria would add 2-3 hours," he said.

Technical issues apart, the competition between the US and Iran to help Lebanon in the energy sector has wider implications for the region.

For Iran, shipping fuel to Lebanon is a sign of a new vision of its foreign policy, according to Sina Toossi, a senior research analyst at the National Iranian American Council (NIAC). He told DW that Iran wanted to become a regional power and neutralize the effects of imposed sanctions by increasing trades with its neighbors.

"New Iranian President Ebrahim Raisi's foreign policy strategy focuses on the region and increasing regional economic interconnectivity and interdependence. However, if the US doesn't enforce sanctions, it may be a sign that Biden has a good intention to get the nuclear deal talks with Iran back on track," he said.

Conversely, the United States is trying to contain Iran's influence in the region by backing the proposals to provide natural gas and electricity to Lebanon. However, it found itself in an awkward situation. By involving Syria in the plan, which already expressed its availability, the US would break its own sanctions imposed on Bashar Assad's government through the 2019 Caesar Syria Civilian Protection Act.

Chris Abi-Nassif, Lebanon program director at the Middle East Institute, told DW that the involvement of Assad's government in the plan might be perceived as the US reaching out to Syria.

"Syria, which had effectively been taken out of the Arab world equation, has been suddenly put back in the picture," he said. Furthermore, Syria may take not only a political advantage by letting gas and electricity pass through its territory but also profits, according to Abi-Nassif. 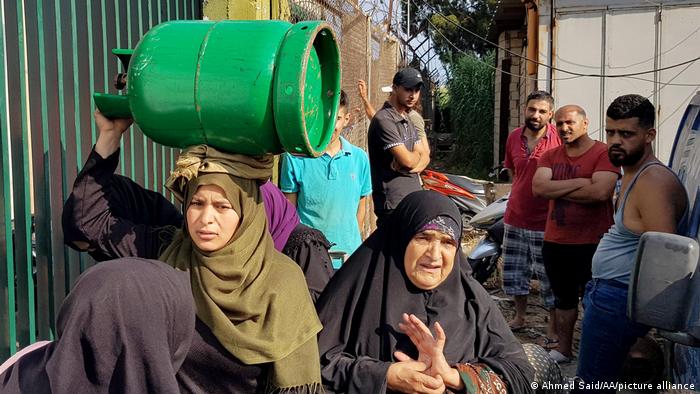 The Iran-Hezbollah initiative to supply fuel won't be enough to satisfy the country's demand for a long time, although Lebanese may breathe a sigh of relief in the immediate term.

Meanwhile, the US proposals are still being negotiated. It may take several months before they make any difference.

Those proposals may relieve the crisis, but it won't resolve the issue of paying for gas and electricity, according to Abi-Nassif.

"The fundamental question is how Lebanon will pay for natural gas and electricity, " he said. "To answer this question, Lebanon should focus on how to settle the debt crisis, restructure the banking system, and how to distribute losses. This is the key to unlock the long-term prospect not only for the energy sector but for any other single sector in Lebanon as well."