Israel will follow in the footsteps of the United States and withdraw from UNESCO. Both countries allege the UN body has an "anti-Israel bias." 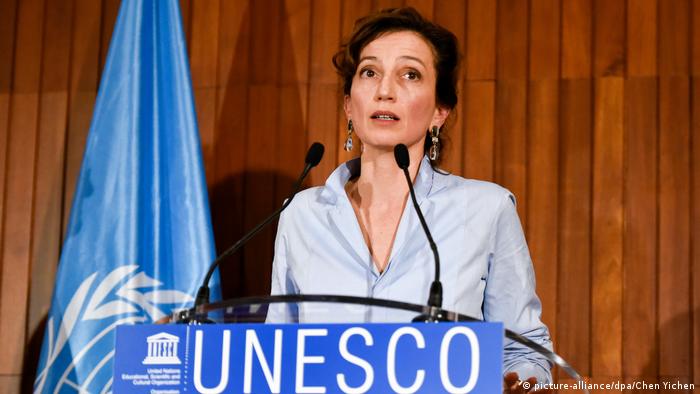 Israel has formally notified UNESCO that it will withdraw from the UN culture and education body.

Israel said in October that it would pull out of Paris-based UNESCO after the United States said it was withdrawing due to alleged "anti-Israel bias."

UNESCO chief Audrey Azoulay said in a statement Friday that she regretted Israel's decision to formally withdraw. As with the United States, Israel's official withdrawal is set to go into effect on December 31, 2018.

"I regret this deeply, as it is my conviction that it is inside UNESCO and not outside it that states can best seek to overcome differences in the organization's fields of competence," said Azoulay, a former French culture minister who is of Moroccan Jewish heritage.

Israel has long accused the UN body of being biased against the Jewish state, a claim repeated by its UNESCO envoy on Thursday.

"UNESCO, led by Arab states, has broken records of hypocrisy, incitement and lies against Israel and the Jewish people, while polluting its noble basic values with politicization and diplomatic terror that sometimes bordered on anti-Semitism," the Haaretz newspaper quoted Carmel Shama-Hacohen as saying on Thursday.

The Israeli UNESCO envoy said it was Israel's "moral duty" to withdraw after the United States made the same decision.

UNESCO came under Israeli and US criticism late last year after it referred to East Jerusalem as "Occupied Palestine" and a criticized "aggression by the Israeli Occupation Authorities" over restrictions imposed at the Al-Aqsa Mosque compound, a holy site known to Muslims as the Noble Sanctuary and to Jews as the Temple Mount.

The US and Israel were also vexed by UNESCO's decision in July to name the Old City of Hebron in the occupied West Bank as a Palestinian World Heritage site.

The US stopped contributing funds to UNESCO in 2011 after the body voted to include Palestine as a member and now owes around $550 million in back payments. The US said in October that "concerns with mounting arrears at UNESCO" were part of its decision to withdraw.

UNESCO has become one of several battlegrounds between Israel and the Palestinian Authority as Palestinians seeks to gain recognition through international bodies and treaties despite warnings from Israel and the United States.

Israel and the United States argue that Palestine should not join international bodies or treaties until it reaches full statehood under an elusive peace deal with Israel.

The UN cultural body is best known for its World Heritage program. It also promotes education and culture, including programs on Holocaust awareness.

The United States previously withdrew from UNESCO in the 1980s, accusing it of a pro-Soviet bias, before rejoining in 2003.

UNESCO's World Heritage Committee has approved a controversial resolution on the conservation status of a key holy site in Jerusalem. The decision has angered Israel and its allies. (26.10.2016)