UNESCO puts Hebron on its world heritage in danger list

The UNESCO World Heritage committee has called Hebron's old town in the occupied West Bank a Palestinian world heritage site. The decision sparked outrage from Israel and the United States. 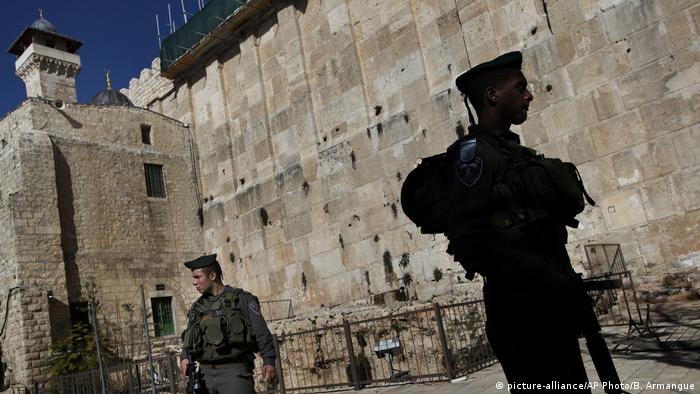 The UN's cultural agency on Friday voted 12 to three, with six abstentions, to give UNESCO World Heritage List status to the old city of Hebron in the occupied West Bank.

In addition to declaring the city to be in danger and of outstanding universal value, the vote noted the city was Palestinian territory.

Israel reacted by saying the decision's wording ignored Jews' historic links to the city, and the Israeli UNESCO ambassador left the session in protest.

"The Jewish connection to Hebron goes back thousands of years [and] Hebron [is] the birthplace of King David's kingdom," he added.

Emmanuel Nahshon, a spokesman for the Israeli Foreign Ministry denounced the decision on Twitter, saying the "irrelevant" UNESCO was promoting "fake history."

In a statement, Palestine's Tourism Minister Rula Maayah said UNESCO's decision, in the face of US and Israeli opposition, was a "historical development because it stressed that the Hebron/Al-Khalil Old Town" and its historic mosque "historically belong to the Palestinian people." The Palestinian Foreign Ministry called it a "success" for Palestinian diplomacy.

Hebron is an important religious site for both Jews and Muslims, and claims to be one of the oldest cities in the world, dating back more than 5,000 years. The city is home to the Tomb of the Patriarchs, said to be the resting place of key biblical figures Abraham, Isaac and Jacob. To Muslims, it is known as the Ibrahimi Mosque.

It's also a key site in the Israeli-Palestinian conflict. Home to more than 200,000 Palestinians and a few hundred Israelis, who live in several small settlements protected by hundreds of Israeli soldiers, the area was seized by Israel in the Six-Day War of 1967, a move considered illegal by the United Nations.

The UNESCO resolution had been fast-tracked as the site is considered to be under threat. The Palestinians have accused Israel of an "alarming" number of violations, including vandalism and damage to properties.

The decision will trigger immediate World Heritage Fund assistance to the endangered site, and is intended to draw the attention of the international community to its plight. The World Heritage committee is obliged to review its situation every year.

Netanyahu announced Israel would cut another $1 million in funding to the UN in order to build a "Museum of the Heritage of the Jewish People in Hebron and Kiryat Arba and Hebron" as well as other projects.

Earlier, the committee decided to add the historic center of Vienna to its endangered list, citing a nearby high-rise project that threatens to "undermine the area's value," according to UNESCO.

The project, set to break ground in 2019, includes plans for a huge hotel, luxury apartments, fitness and sports facilities, a new conference venue and a 1,000 square-meter (10,700 square-foot) indoor skating rink.

Australia's Great Barrier Reef, two-thirds of which have been threatened by coral bleaching caused by warming sea temperatures linked to climate change, was not placed on the endangered list.

Despite two straight years of coral bleaching and fears on whether Australia's long-term conservation targets can be met, the committee praised "major efforts deployed by all those involved" in the Australian preservation plan.

Israel has bolstered security in a major crackdown around Hebron that is affecting tens of thousands of civilians. The lockdown comes in response to two recent attacks on Jewish settlers. (04.07.2016)