Biden wanted to assure Israel that the US would not tolerate a nuclear-armed Iran, despite his administration's efforts to rejoin the 2015 nuclear deal. He also defended recent US airstrikes in the Middle East. 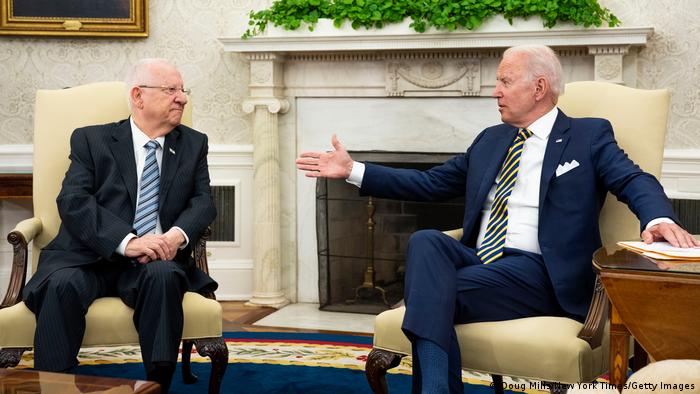 US President Joe Biden met with Israeli President Reuvin Rivlin at the White House on Monday, with the US leader vowing to take a hard line on Iran despite his administration's ongoing efforts to rejoin the 2015 nuclear deal.

"What I can tell you is that Iran will never get a nuclear weapon on my watch," Biden said in the Oval Office next to Rivlin.

"Things are still far from decided," the US president added, referring to ongoing negotiations on the nuclear deal, which is formally known as the Joint Comprehensive Plan of Action (JCPOA).

The US had withdrawn from the deal in 2018 during former President Donald Trump's administration. Israel has come out strongly against the JCPOA.

The Israeli president told reporters after the meeting that he was "satisfied" with Biden's Iran comments and said the two countries "have to cooperate."

It is Rivlin's last visit to the US as Israel's president, with Jewish Agency Chairman Isaac Herzog taking over the role on July 9. Rivlin told Biden that Israel has "no greater friend alive" than the US.

Biden said he hoped to meet Israeli Prime Minister Naftali Bennett "very soon," with White House spokesperson Jen Psaki saying earlier in the day that the two sides are "working on a date" for the gathering.

Bennett became prime minister on June 13, and is backed by a diverse coalition of left, right and Arab parties in Israel. His predecessor, Benjamin Netanyahu, had served in the position for 15 years.

Some US lawmakers have claimed Biden does not have the legal authority to order the airstrikes, and argue the president has to receive congressional authorization to carry out the military action.

"I have that authority," Biden said during the meeting with Rivlin.

The airstrikes targeted three operational and weapons storage facilities in Iraq and Syria. At least four Iran-backed milita fighters were killed in the strikes, with the Kataib Hezbollah group vowing revenge.

US forces under rocket fire

A US military base in eastern Syria was attacked by rockets on Monday, most likely from Iran-backed militias operating in the area. The US then returned fire.

Biden previously ordered an airstrike on a site in Syria in February which was reportedly occupied by Iran-backed militias. The move was in response to rocket attacks against US forces in Iraq.