Japan's blanket ban on bringing in new workers from overseas is hurting foreign firms — as well as the business-friendly reputation of the world's third-largest economy. 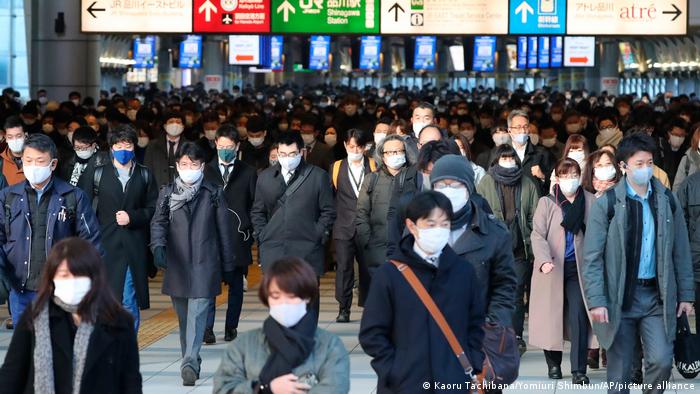 Restrictions on entering Japan that were imposed in the early stages of the coronavirus pandemic two years ago continue to damage the operations of German companies in an essential and long-standing market.

Several German firms are rethinking their strategies in the world's third-largest economy, as Japan shows no signs of relaxing rules in the immediate future.

COVID-19 infections in Japan are at their peak — the highest daily average reported — now at 91,345 new infections recorted each day.

The country, which has a significant elderly population, has logged a total of 3,309,394 coronavirus cases with 19,341 deaths, according to the latest figures from the Johns Hopkins University.

Elsewhere in Asia, South Korea has just reported over a million cases of the coronavirus and 6,922 deaths. Neighboring Taiwan appears to have fared relatively well in the campaign against the virus, reporting just 19,101 cases and 851 deaths.

The German Chamber of Commerce and Industry (AHK) in Japan has found that 73% of the German firms participating in their recent survey believe that their ongoing projects and business activities are at risk as a direct result of a ban on new foreign workers entering the country.

Responses from 25.2% of 396 surveyed companies were included in the evaluation. The AHK ran the online survey at the end of January and released results on February 3.

The self-reported survey also highlighted that 29% of the AHK member firms have an "urgent need" to fill positions with specialists from overseas, and 23% have lost "substantial business" as a result of the Japanese government's immigration policy.

The AHK added that 36% of the companies in the survey said Japan's pandemic rules, among the strictest in the world, mean that they are reconsidering their operations in the country.

Some companies said they planned to downsize their Japan presence or shift responsibilities for the broader region to another part of Asia.

Marcus Schuermann, the CEO of the chamber, told DW that the results were worrying.

"Having experts and specialists coming in from overseas is critical to the development and growth of organizations, but, as a result of the Japanese government's rules, these people are just not coming in," he said.

"There are many companies that are urgently in need of project-specific experts," he added.

"Japanese customer companies expect that kind of service and that is why they chose to work with German firms, while the German side wants to fulfill its commitments," he said, "but it is just impossible now."

Is Japanese reliability in question?

After assessing the total figure combined from individual firms' estimates, the AHK concluded that the German companies have lost business to the tune of €100 million ($114.6 million) over the past two years because of Japan's entry ban.

The longer the ban stays in place, the more business that will be lost, Schuermann said.

Japanese partner firms cannot afford to delay projects and will look for an alternative solution involving domestic companies, he added.

Trade between Germany and Japan is enormous and, at least until the outbreak of the coronavirus in the early months of 2020, was growing.

Germany is the top European exporter to Japan, with trade valued at €38.6 billion ($42.3 billion) a year before the global health crisis, while German direct investment into Japan came to €15.6 billion a year.

At least 12,480 German companies export to Japan and 450 have gone as far as to set up a subsidiary there.

In addition, German business is responsible for some 265,000 jobs in Japan.

"Japan has for many years been an important market for German businesses, not necessarily because of a high growth rate, but more because of the stability of the market and the commitment on both sides to long-term relationships," Schuermann said.

"But we are not looking at two years that have effectively been lost because of the entry restrictions, and some companies are beginning to ask themselves how reliable Japan really is as a partner," he added.

Japanese health officials on Thursday confirmed that daily coronavirus infections had for the first time crossed 100,000, largely driven by the rapid spread of the omicron variant.

Businesses recognize that the Japanese government is grappling with the surge, but maintain that a blanket ban on all new arrivals is inappropriate and damaging.

Klaus Meder, president of Bosch Corp in Japan, told DW that his company was waiting for the Japanese government to let no fewer than 31 much-needed experts into the country, including software and appliance specialists.

He said the company had been waiting months for the CEO of one of its legal entities to be granted a visa.

"The restrictions are having an impact on all projects across the organization, but I would say the biggest problem is the 'soft impacts' that we are seeing," Meder said.

"These are the links that it has taken many years to build with customers, suppliers, partners and everyone else," he added. "Those links are all getting weaker."

Despite the support of Japanese companies and Keidanren, the Japan Business Federation, the government does not appear to be edging closer to opening the borders, Meder said.

Some analysts said there was broad public support for the policy ahead of a general election later this year.

"I see that the government has agreed to let in a couple of hundred foreign students, and that's a positive development," Meder said.

"But I have a group of people who are urgently needed here, they are willing to meet all the requirements that the government wants to impose on them — vaccinations, quarantine, daily tests, whatever is necessary — but they are not allowed to come in," he added.

'No one has got it completely right'

Yoko Tsukamoto, a professor of infection control at the Nursing Health Sciences University of Hokkaido, explained that Japan has been vigilant with COVID-19 because health authorities still don't have full information on its severity and how it will develop in the future.

"Many Japanese look at what is happening elsewhere in the world and believe that closing the borders is the best defense against new variants of the virus," she told DW.

"They think that Japan is a small island and that the ban on people coming into the country is justified," she said. "But health professionals were aware early on that it would be impossible to keep the virus out, as well as any new versions, such as omicron."

The ban did give Japan a few additional weeks to prepare for the arrival of omicron, Tsukamoto added, but keeping the virus at bay entirely was "wishful thinking," as it could enter the country sooner or later.

"We are looking at how other countries are trying to control the spread of the virus, and the one thing that is clear is that no one has got it completely right, and that every government is still trying to find the best solutions," she said.