Japan: Tokyo braces itself for worst typhoon in 60 years

Stockpiling and evacuation procedures are underway with winds of up to 216 kilometers per hour forecast. One person is reported to have died before the storm even hit land. 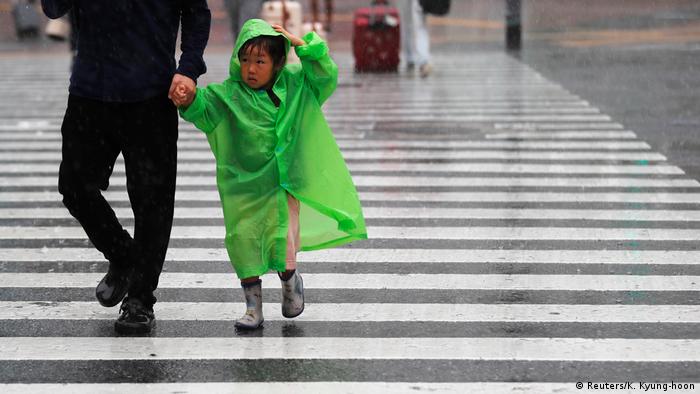 A child holds onto a raincoat, ahead of Typhoon Hagibis hitting Tokyo

Tokyo was bracing itself on Saturday for the worst typhoon to hit the city in six decades.

Typhoon Hagibis was hurtling towards the Japanese capital with winds expected to reach maximum speeds of 216 kilometers per hour (134 miles per hour), Japan's Meteorological Agency (JMA) said. It was forecast to reach land in central or eastern Japan by late afternoon or early evening, local time.

The JMA forecast up to 80 centimeters (31.5 inches) of rainfall as stockpiling had already ensued ahead of anticipated power outages.

Hagibis has already caused major disruption to transport services, as well as sporting events in the country. Three Rugby World Cup matches have been canceled and qualifying at the Japanese Grand Prix at the Suzuka circuit, five hours to the south of the capital, has been postponed. In excess of 1,600 flights have been grounded as Japan came to a virtual standstill.

Noncompulsory evacuation orders have also been issued to roughly 600,000 people, according to public broadcaster NHK.

Prime Minister Shinzo Abe's Cabinet hosted a disaster management meeting Friday. He said 17,000 police and military forces were ready to be deployed to ensure the safety of citizens. "The typhoon could cause power outages, damage to infrastructure and significantly affect people's lives," Abe said.

One death and four injuries had already been reported by local media early on Saturday morning in the city of Ichihara, east of Tokyo. The fatality was that of a man in his forties whose car overturned, public broadcaster NHK said. 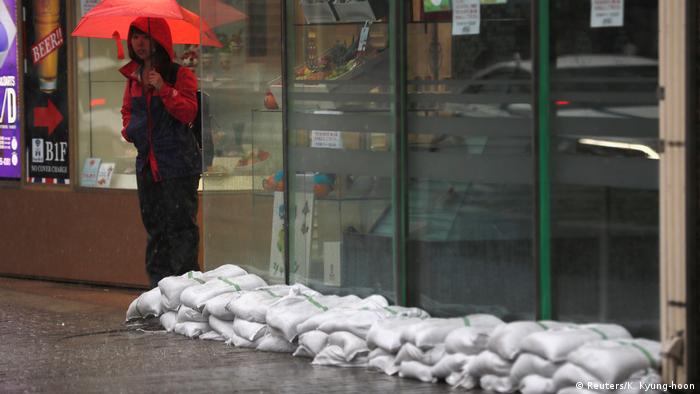 Sandbagging was already prevalent in Tokyo, just hours before Typhoon Hagibis was due to strike

Japan receives approximately 20 typhoons per year, but it is not so common for Tokyo to be affected.

Hagibis is approaching just weeks after another powerful storm, Typhoon Faxai, resulted in two deaths and injured dozens more in the city of Chiba.

Four fishermen are dead and two are missing after an arched bridge in Nanfangao collapsed onto fishing boats on Tuesday, hours after a typhoon swept through. Rescuers are searching for workers trapped in the wreckage. (02.10.2019)

The show, featuring a controversial South Korean statue of a wartime sex slave, was forced to shut down in early August. Japan and South Korea have sparred over the use of "comfort women" during World War II. (08.10.2019)

A powerful typhoon moved across the western end of Japan's largest main island on Friday. At least two people were killed, and authorities advised nearly 100,000 people to evacuate. (17.07.2015)