Four fishermen are dead and two are missing after an arched bridge in Nanfangao collapsed onto fishing boats on Tuesday, hours after a typhoon swept through. Rescuers are searching for workers trapped in the wreckage. 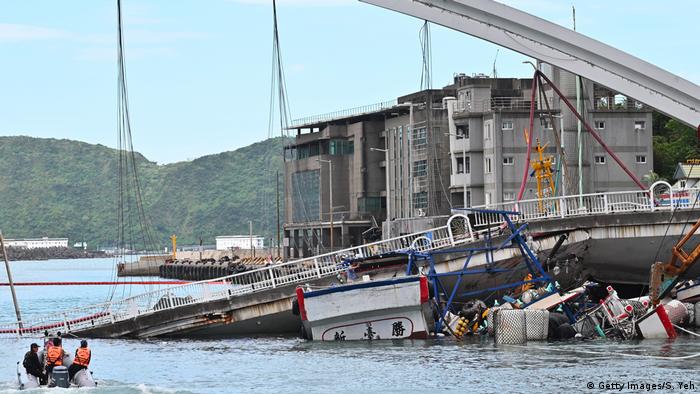 Rescue workers have recovered four bodies after a bridge collapsed on three fishing boats in Taiwan on Tuesday. Two people are still missing.

Among the victims are one Filipino and two Indonesian fishermen. The fourth victim remains unidentified.

The 21-year-old bridge collapsed Tuesday morning in Nanfangao, a small but crowded fishing village about 60 kilometers (40 miles) east of Tapei on the eastern coast of Taiwan.

Ten people were pulled from the water and sent to the hospital immediately following the collapse. Since Tuesday, hundreds of rescuers have worked to remove the wreckage from the boats as divers search the waters for the missing.

Three fishing boats were moored below the bridge when the 140-meter-long (460-foot) bridge fell down on top of them. The sun was shining and the weather was calm when the bridge fell on Tuesday morning. Officials would not say if it was the storm that caused the collapse.

Security video footage shows an oil tanker nearly making it across the bridge before tumbling backwards into the water as the bridge fell. The tanker then burst into flames. The Taiwanese driver was seriously injured. Local media report that at least nine people also fell from the bridge.

Among the injured are Filipino and Indonesian guest workers who had sought shelter from the typhoon on the fishing boats. Workers from these countries regularly operate boats in Taiwan.

The bridge, built in 1998 to replace a lower structure that did not allow large vessels to pass underneath, carries traffic over the busy port. A local tourist attraction known as the "lover's bridge", it is the only single-span arch bridge in Taiwan and the second single arch-cable steel bridge in the world, according to the company that built it.

The collapse came as a shock to many in Taiwan. A high frequency of earthquakes and typhoons in the region has led the country to develop high building standards.

The government is investigating what caused the bridge to fall. It was last reinforced in 2018 and the local bridge authority issued a statement saying it had been "regularly checked and maintained".