Prime Minister Fumio Kishida is seeking a mandate for his policies in the October 31 parliamentary election. Meanwhile, the opposition has vowed to close Japan's income gap. 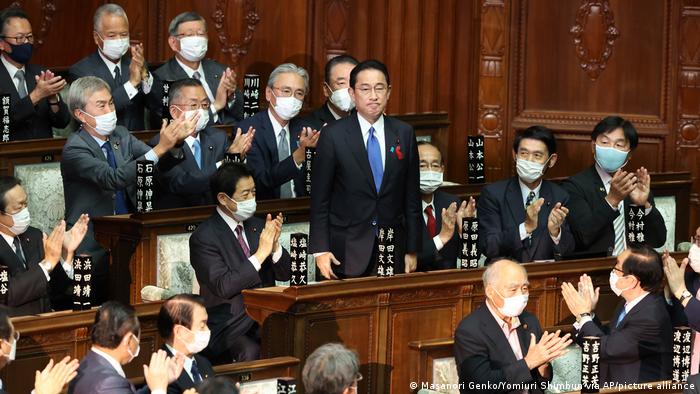 Fumio Kishida will lead the Liberal Democratic Party, along with its coalition partner the Komeito party into the election

Kishida, who formally took over the reins from Yoshihide Suga 11 days ago, will be seeking to maintain a lower house majority for his conservative Liberal Democratic Party (LDP).

Voters in Japan will head to the polls on October 31 to choose a new parliament, and indirectly elect the country's next government.

Kishida to lead LDP into polls

The last lower house election was held in 2017 under Shinzo Abe, who pulled the long-ruling LDP further to the right while serving as Japan's longest-serving prime minister.

This time, Kishida will lead the party, along with its coalition partner the Komeito party, into the election.

"I want to use the election to tell the people what we're trying to do and what we're aiming for," he told reporters at his office.

Talking about his time in office so far, Kishida said: "I've had a very busy schedule but strangely, I'm not feeling tired — I'm feeling fulfilled."

All eyes in Japan on Princess Mako as her wedding nears

The country's largest opposition party, the Constitutional Democratic Party of Japan (CDPJ), announced its plan to focus on closing Japan's income gap with wealth redistribution if it were to win the election.

A similar position has been announced by Kishida, blurring the policy differences between the LDP and CDPJ ahead of the election.

"'Wage hikes and distribution once growth is achieved.' This is what [former prime minister] Abe was saying. But there was no growth over the past eight, nine years, and no wage hikes," CDPJ chief Yukio Edano told reporters.

"If we don't distribute wealth first, no growth is achieved. This is a rather clear difference [between the two parties]," Edano said.

The CDPJ has also highlighted its support for issues such as same-sex marriage and different surnames for couples.

On the other hand, the LDP remains socially conservative, and Kishida has said he was not in favor of same-sex marriage.

The marriage had originally been planned for 2018, but a tabloid scandal involving her commoner fiance put the couple under intense public scrutiny and delayed the wedding.

Japan bids to harness the energy of super typhoons