A French court has ordered a psychological assessment of far-right leader Marine Le Pen in a case about the dissemination of extremely violent images. Le Pen says the order is part of a government plot to discredit her. 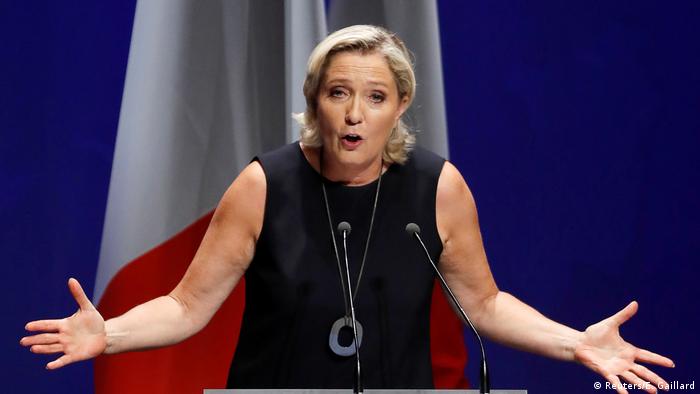 A French court in Nanterre that is hearing a case against Marine Le Pen for sharing violent images on her Twitter account has ordered a psychological assessment of the leader of the far-right party National Rally (formerly the National Front), in order to determine whether she is "capable of understanding remarks and answering questions." Furthermore, the psychologist examining her is tasked with ascertaining whether her mental health may pose a risk to the public.

The case against Le Pen began in March, after she was stripped of her parliamentary immunity. She is on trial for violating French laws regarding the distribution of messages that "incite terrorism or pornography or seriously harm human dignity."

Though the law requires psychological assessments in such cases, Le Pen voiced outrage at the decision and said she would defy the order: "I'd like to see how the judge would try to force me to do it." She also posted an image of the court order on her Twitter account with the words: "It's genuinely STAGGERING. This regime is REALLY starting to be frightening."

She concluded the Tweet with her initials, shorthand to signify that she wrote the message, not a staff member.

Le Pen, who has said the case against her is a violation of her freedom of expression, claims the government of France is employing the tactics of defamation that totalitarian regimes use to discredit political opponents in an attempt "to make them look crazy."

In the wake of the November 2015 Paris terror attacks, in which 130 people were killed by men claiming allegiance to "Islamic State" (IS), Le Pen posted a number of violent images depicting IS atrocities. She posted the images in response to a journalist's comparison between her far-right party and "Islamic State," which is also known as Daesh.

The images featured the body of beheaded American journalist James Foley; a man in an orange jumpsuit being run over by a tank; and a captured Jordanian pilot being burned alive in a cage. Le Pen captioned the images with the words: "Daesh is this!"

Le Pen and her populist party have long insisted they are being unfairly persecuted by France's courts and political establishment as a means to marginalize them. Le Pen and her party have been the subject of a number of investigations, including over the misuse of EU funds.

A French court has rejected a bid by the National Front to unseat Jean-Marie Le Pen as honorary president. His vow to attend the party's congress is likely to aggravate a public row with his daughter, Marine Le Pen. (09.02.2018)

Marine Le Pen defended the push to make the National Rally more mainstream, but also said her party was right about "society's descent into savagery." She is hoping to boost her 2022 presidential bid after taking a hit.