Marine Le Pen has warned her party could die within months after a French court seized party funds. And she has found some unlikely supporters in her appeal. 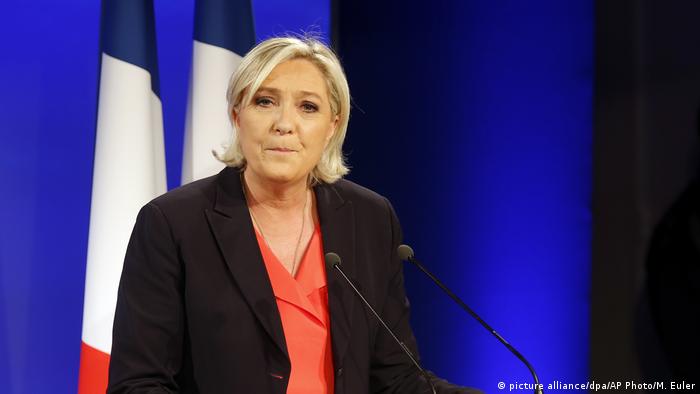 France's National Rally, the party of far-right leader Marine Le Pen, on Monday filed an appeal against a decision by French judges to seize €2 million ($2.3 million) in subsidies as part of an inquiry into potentially misspent EU funds.

Le Pen is accused of using funds from the European Parliament designated for parliamentary aide salaries to pay employees who were actually working for her party.

Two investigating judges seized the party's subsidies to ensure Le Pen's National Rally — formerly the National Front — could cough up the money if a court ordered the party to repay the funds to the European Parliament.

For now, the judges' decision to withhold the money stands unless there is a ruling to reverse it, with no outcome expected for a number of weeks.

Le Pen told broadcaster RMC that "the decision by the judges is a real coup d'etat," adding that it meant the party would be unable to pay staff salaries past July.

She said the subsidy seizure was politically motivated, and that the magistrates behind it had ties with left-wing organizations.

"This spells the death of the National Rally by August," Le Pen told BFM television.

The party had been expected to receive about €4.5 million in subsidies this year, proportional to the party's results in recent elections. All political parties receive the subsidies under French election rules.

Seven of the party's candidates, including Le Pen, won seats in France's lower house in parliamentary elections that took place just after the May 2017 presidential vote.

A number of politicians have come to the defence of Le Pen and her party in a rare display of solidarity.

"The principle in a democratic nation is to make sure that a seizure doesn't threaten a party's very existence," Socialist Party leader Olivier Faure told Europe 1 radio.

The leader of the centrist UDI party Jean-Christophe Lagarde said Le Pen was "right to protest," and that the judges should have waited for a verdict in the case before withholding party funds.

On Monday Le Pen said she was launching an online fundraising campaign to make up for the vetoed subsidies. Party treasurer Wallerand de Saint-Just said €60,000 had been raised within a few hours.

In the recent French presidential debate, liberal candidate Emmanuel Macron beat right-winger Marine Le Pen with room to spare. Yet all it showed was how little the far right can be reasoned with, writes Barbara Wesel. (04.05.2017)

The EU funds Le Pen has been ordered to repay relate to money she claimed for a parliamentary secretary. The court said Le Pen "has not been able to prove that her assistant performed actual work for her." (19.06.2018)