France's far-right National Rally, formerly the National Front, said the party could soon be over after judges withheld millions in state funds. The move comes amid a probe into the party's alleged misuse of EU funds. 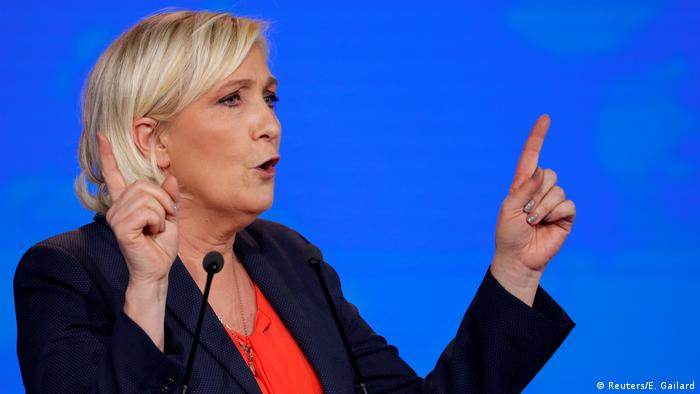 Marine Le Pen, the leader of the anti-immigration National Rally, decried a court decision to seize state funds from the party on Sunday.

French judges decided to block some €2 million ($2.3 million) in public subsidies to the party, formerly known as the National Front. Political parties in France receive public funds depending on how well they did in elections.

Le Pen said the amount of withheld funds is nearly half of the €4.5 million the party was supposed to receive this year.

The judges withheld the public funds from the far-right party as part of an ongoing probe into National Rally's alleged misuse of European Parliament funds.

'They are planning our death'

Le Pen and other lawmakers within her party said without the state funds, which were due to be delivered in the coming days, her party might not be able to stay afloat.

"We won't be able to pay our staff, our rent, our financial obligations from about July 15," Sebastien Chenu, a National Rally lawmaker and spokesman told Reuters news agency.

"They are planning our death," he added.

She told news agency AFP that the party won't be able to operate without the money and that National Rally "will be dead by the end of August."

Public subsidies for parties are common in several European countries, which say they help ensure an equal playing field between political parties while limiting the risks of corruption.

The National Rally, which dropped its National Front moniker this year in a bid to shed its racist and anti-Semitic reputation with voters, is currently under investigation for allegedly misusing millions of EU funds.

The European Parliament has accused Le Pen's party of using €5 million in funds for parliamentary assistants and paying it to Le Pen and other party lawmakers, including her father and party founder Jean-Marie Le Pen.

Marine Le Pen and nine others have been charged in the inquiry so far.

Marine Le Pen defended the push to make the National Rally more mainstream, but also said her party was right about "society's descent into savagery." She is hoping to boost her 2022 presidential bid after taking a hit.