French elections: Who finances the candidates? | Business | Economy and finance news from a German perspective | DW | 05.05.2017

French elections: Who finances the candidates?

French presidential contestants are barred by law from receiving more than a set limit of donations to fund their campaigns. So it's all the more interesting to find out where Macron and Le Pen get their money. 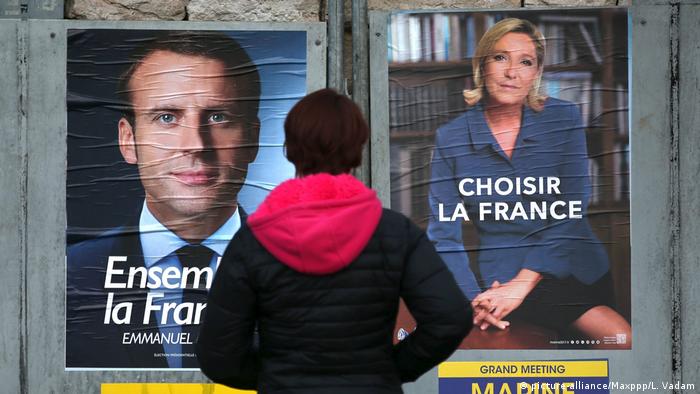 Presidential campaigns in the United States are an expensive affair. During last year's elections, Hillary Clinton spent a whopping $1.2 billion (1.09 billion euros) while the victor - Donald Trump - managed to cap his expenses at $647 million. The two received donations from rich business people - some of them worth over $20 million each.

One such donation would be enough to finance the whole campaign of a candidate in a French election. That's because the amount of money a presidential contestant is allowed to spend during the campaign for the first round of the election is limited to 16.8 million euros.

The limit is raised by an extra 5 million euros for the two finalists competing in the second round. That means the presidential hopefuls in the upcoming election - Emmanuel Macron and Marine Le Pen - have had to curb their campaign-related expenditures at about 22 million euros.

France's electoral code imposes constraints not only on the total costs but also on who donates to the candidates. An individual is permitted to give out a maximum of 7,500 euros a year to a party, and a maximum of 4,600 euros to a presidential campaign.

Corporate firms and other legal entities - with the exception of political parties and movements - are prohibited from financing the candidates.

The rule is intended to prevent them from gaining unjust political influence as well as to ensure equality of opportunity, says Marcus Obrecht, a political analyst at the University of Freiburg. "In this regard, I believe it is a sensible regulation."

But we will have a clear picture on how the candidates financed their campaigns only after the end of the election.

The contestants first have to submit their finances to the scrutiny of the National Commission for Campaign Accounts and Political Financing (CNCCFP). "Only afterwards will we have an overview of the actual amount of donations and expenditures," Obrecht told DW.

A few figures, however, are already known. "En Marche," the political movement founded by Macron only last year, received about nine million euros in donations until the end of March. The money came from 35,000 individuals, who gave an average of 257 euros each. DW's request for more recent figures remained unanswered at the time of this report's publication.

In March, Macron said that he had taken out a personal loan amounting to 8 million euros from a French bank, without revealing its name.

Such a move is not uncommon in France. "Candidates can borrow money – not only from banks, but also from companies or private persons," Guillaume Duval, editor-in-chief of French monthly magazine "Alternatives Economiques," told DW. "This can be a way to circumvent the restrictions," as it's not always clear under which conditions the loans are granted.

After the election, the French state reimburses the candidates who won at least 5 percent of the votes half of their campaign costs. This allows people to contest without the fear of being saddled with debts in the aftermath.

Marine Le Pen has so far not released any details regarding her campaign finances. Her team didn't respond to DW's request for information on the subject.

In contrast to Macron, Le Pen can count on the support of her already well-established party - the "Front National" (FN) - which was set up in 1972 by her father, Jean-Marie Le Pen.

But it would be a stretch to imagine that the contributions paid by its 85,000 members suffice to wage an electoral campaign.

The party's funding has regularly drawn authorities' focus. An investigation is currently taking place to look into whether rules on party financing have been violated in the last few years, using a method by which companies that side with FN have provided funds to the party by setting up financing vehicles in the form of so-called micro-parties.

FN's loan arrangements are also murky. In the summer of 2016, the party applied for a loan from a Russian bank to the tune of over 3 million euros.

She may well become France's next premiere dame. In portraits of Brigitte Macron, journalists often focus on the age difference to Emmanuel Macron, 24 years younger than her. But who is this woman really? (29.04.2017)

The application came after Marine Le Pen had already borrowed 9 million euros from a private bank in Russia in 2014. The repayment conditions haven't been made public. Russian President Vladimir Putin last received Le Pen on March 24 this year - it was her fourth visit to the Kremlin.

French authorities are also investigating allegations of abuse of power against Marine Le Pen. The FN leader, who is serving as a deputy in the European Parliament, is accused of misusing the legislature's funds by tapping them to pay for party assistants in France.

The European parliament has already sanctioned Le Pen by cutting her monthly salary by half to around 3,000 euros and withdrawing other allowances. Her immunity from prosecution could also be lifted to allow further investigations to take place.

Campaign financing is not just an issue of money. Companies can provide support to candidates by providing their staff free of cost, says journalist Duval. "Although it's not permitted, it's very difficult to keep tabs on such practices."

In March 2017, Jean-Jacques Mourad, a doctor, resigned from his position as a health policy advisor in Macron's team following revelations that the pharmaceutical firm Servier had financed his participation at a number of conferences.

Thanks to his former job as a partner at the investment bank Rothschild, Macron is already widely perceived to have the backing of influential players in the business world.

Former President Nicolas Sarkozy also had many rich supporters in 2012, when his campaign expenditure exceeded the statutory limit. Sarkozy has faced legal troubles as a result of this violation.

Sarkozy's predecessor Jacques Chirac, too, was found guilty of financial shenanigans and given a two-year suspended sentence. While serving as mayor of Paris in the 1990s, Chirac misused public funds by paying around 30 people who worked not for the city administration, but rather for his party.

Le Pen: 'France will be led by a woman: either me or Madame Merkel'