A French court has rejected a bid by the National Front to unseat Jean-Marie Le Pen as honorary president. His vow to attend the party's congress is likely to aggravate a public row with his daughter, Marine Le Pen. 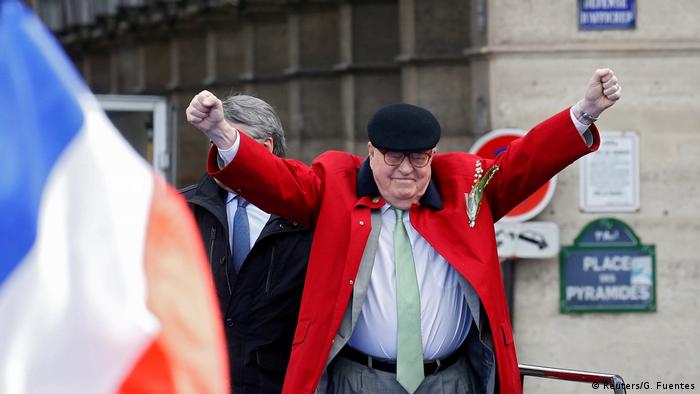 The appeals court in Versailles ruled Friday that Jean-Marie Le Pen, founder of France's far-right National Front (FN), could keep his position as the party's honorary president for life.

At the same time, it upheld the FN's 2015 decision to expel the 89-year-old from the party over controversial remarks he made about the Holocaust.

Le Pen led the anti-immigrant FN for more than three decades before handing control over to his daughter, current party leader Marine Le Pen, in 2011. In recent years, the pair has been locked in a bitter struggle over what shape the party's future should take.

Revamping the party's image, broadening its appeal and possibly changing its name are expected to be on the agenda at the FN's congress in the northern city of Lille next month.

Despite demands from party members that he stay away from the event, Le Pen senior has threatened to call on police to help him gain entry to the party meeting.

"I will go with the help of police forces if needed," he told Le Figaro newspaper, setting the stage for a possible clash with his estranged daughter.

"My role as honorary president obliges me to follow what the National Front does and the congress is at the heart of the party's activities," he added.

Responding to Friday's ruling, the FN said in a statement that only full-fledged members who have paid their membership dues would be allowed to attend.

"Jean-Marie Le Pen will therefore not be allowed in," the statement said.

Read more: 'A bit of a loss for France'

Marine Le Pen kicked her father out of the party in 2015 after he repeatedly expressed the view that Nazi gas chambers were a mere "detail" of World War II history. The move was part of an attempt to boost party support and purge it of racism, but the elder Le Pen responded by taking the FN to court.

In its decision Friday, the court found the party was justified in banning Le Pen from full-fledged membership, but it also recognized his right to retain the symbolic status of honorary president for life — a position created for him when he handed the reins to Marine in 2011.

His time in the role may be cut short, however, given that party members are expected to use the congress to vote on whether to scrap the position.

Marine Le Pen won 34 percent of the vote in France's presidential elections last May, losing out to centrist Emmanuel Macron.

French choose between an internationalist and a protectionist president

France is electing a new president who will have to bring together a country that is heavily divided. And that challenge is unlikely to be easily met. Lisa Louis reports. (06.05.2017)