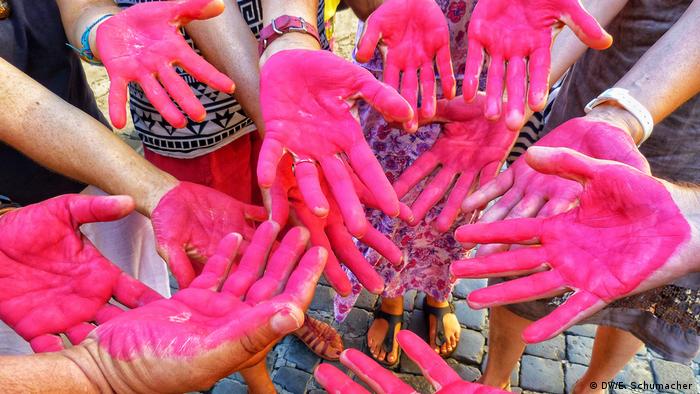 Plenty of people in Rome were happy on Wednesday that Italy's far-right anti-immigrant interior minister, Matteo Salvini, was not granted his wish to hijack the governmentand steer it entirely towards his own goals.

But perhaps no one was as delighted as Marlene Micheloni, 64, and Mauro Carlo Zanella, 54, who have been protesting Salvini's policies at least once a week since he took office in June of last year.

"He sure looks like a fool now," says Micheloni smiling.

Their group is a loosely organized collective of about 300 people, most of them middle-aged or older, veterans of Italy’s strong leftist and labor movements of the 1970s and 80s. They call themselves "Mani Rosse Antirazziste," or the Red Hands Anti-racists (MRA), symbolizing blood on the hands not only of Salvini, but his entire right-wing League party, for the series of draconian immigration measures introduced since it came into power in June 2018. Those measures includebanning refugee rescue ships, as well as shutting down the country's official refugee camps and bulldozing the makeshift ones.

The MRA is just one of many groups across the political spectrum voicing their opposition to the direction the League has taken Italy, but,they are some of the most visible, holding protests across Rome whether they receive permission or not. They sometimes work in tandem with parts of the Catholic Church, the Left and Green parties, and civil rights NGOs.

"A return to fascism is the logical conclusion of Salvini's policies," says Zanella. For him and the MRA, the League’s attempts to put "Italy first" and remove foreigners from its borders – not just refugees, but other groups such as Sinti and Roma – is remisicent of Italy under former dictator Benito Mussolini.

"It is the people's responsibility to hold them to account, for example, for all of the people who have drowned in the Mediterranean." 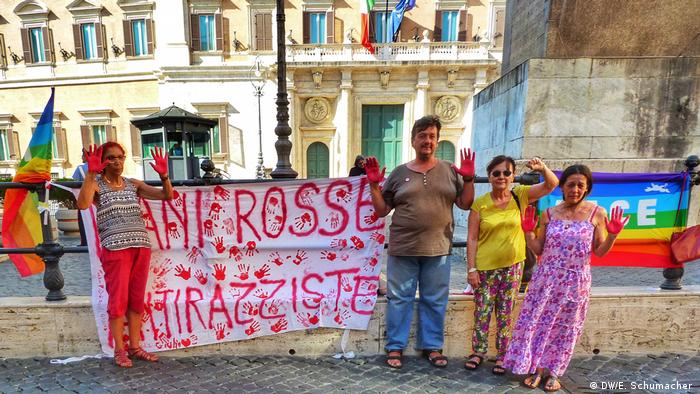 Zanella is an elementary school teacher and a father of four working in a public school with pupils from diverse backgrounds. He says he has seen firsthand what happens when children are fed a diet of lies about foreigners from right-wing press and TV, leading them to ostracize their classmates. "Children absorb everything – including prejudice they do not yet understand."

Micheloni, the daughter of Italian immigrants in Switzerland, is a trained sociologist who spent years researching migrant communities. She has three children, including a son adopted from Russia.

For both, the need to oppose the right-wing is as imperative today as it has ever been in Italian history. According to Sanella, referencing the interior minister’s recent charm offensive in the relatively impoverished parts of southern Italy: "Salvini is convinced that the people want him as the new Duce," referring to the title meaning "Duke" that Mussolini gave himself.

Indeed, Zanella felt so seriously that he and two other MRA members went on a hunger strike at the end of July for two weeks to try and convince President Sergio Mattarella not to sign the "security decree" that the League had pushed through parliament — a decree that has since garnered international condemnation for punishing people who try to rescue refugees drowning at sea.

For her part, Micheloni is part of a circle of volunteers taking turns waking up every morning at 6:00 a.m. to prepare coffee, tea and breakfast for a group of about 30 refugees made homeless by Salvini's destruction of migrant centers and rollback of social services.

With other members of MRA, in defiance of a protest ban, they demonstrated outside the Senate building earlier in August in a bid to disrupt debate on the League’s "security decree", which they argue violates long-established international martime laws in puruit of Salvini’s ethno-nationalist agenda. Using a megaphone, they read out loud the main articles of the Italian Constitution and the Universal Declaration of Human Rights.

The group is also unafraid of the city police, whose presence is increasingly ubiquitous on the streets of Rome. Micheloni is famous within their circle for crying, "I would rather have 100 refugees in my house than a single policeman!" after an officer commented that she should try taking some of the asylum seekers home. Micheloni's remark should not be mistaken for bravado — she regularly hosts one or two migrants cast out by the League's attempts to drive all non-Italians from the country's borders.

'Salvini is finished — for now'

Two weeks ago, Salvini prompted a government crisis when he called for a no-confidence motion against Prime Minister Giuseppe Conte. However, Salvini was embarrassed not once but twice, first when the Senate refused to hold the vote immediately and again on Tuesday, when Conte and several other prominent lawmakers issued searing speeches, condemning him for purposely trying to bring down a government and "irresponsibly" send Italians back to the polls only a little more than a year since the last election.

Despite blaming Salvini for the upheaval, Conte offered his resignation, and the ruling coalition is dead in the water.

Micheloni said that she is "happy that Salvini is finished — for now. I am a bit scared of what comes next." There has been talk of a new governing alliance between the League's erstwhile coalition partners, the Five Star Movement (M5S), and the Democratic Party (PD) of former Prime Minister Matteo Renzi. But for Micheloni, not only would this lead to another protracted and unstable government, but "the PD is no better than the League in some ways, they have also persecuted people who tried to help refugees."

"It's very risky to continue with a new majority, another illegitimate Italian government that hasn't been elected," agreed Zanella, using "illegitimate" to refer to Italy’s several unelected and technocratic governments. He has, however, declared himself an optimist, hoping that Italy "gets a government that will reopen the ports and resume search and rescue operations at sea, and take us out of the devastating ethical, cultural, and economic crisis we are in by implementing policies that show social solidarity."

Both agreed that their protesting days were far from over. "There is a strong tradition of demonstrations in Rome, " according to Zanella, "and we will never stop."

"Anything that has been built can be destroyed in a second if you are not vigilant."