Spain has said it will respond to a "humanitarian emergency" by sending a naval ship to escort a migrant rescue boat from the coast of Italy's Lampedusa to the Spanish island of Mallorca. 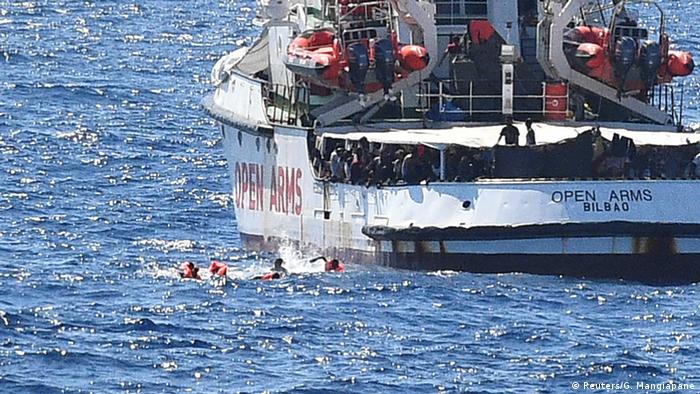 The Spanish government said Tuesday it was sending a naval ship to rescue migrants who have been stranded for 19 days off the coast of the Italian island of Lampedusa.

Spanish Prime Minister Pedro Sanchez said in a statement that the Audaz warship would depart from the southern Spanish port of Rota on Tuesday afternoon.

The migrant rescue boat, operated by Spanish NGO Proactiva Open Arms, is thought to be carrying more than 80 migrants. The NGO said Tuesday that migrants have been jumping from the ship in a desperate attempt to reach the shore.

Matteo Salvini, Italy's hard-line anti-migrant interior minister, has refused port access to the ship. The rescue vessel has been anchored since Thursday within swimming distance of Lampedusa.

According to Sanchez's statement, the vessel's arrival in Lampedusa is not expected until Friday. It will then escort the Proactiva Open Arms rescue ship to Palma on the Spanish island of Mallorca.

"After analyzing various options, the Spanish government ... considers this is the most suitable" for "the humanitarian emergency on board the Open Arms," Sanchez said in the statement on Tuesday.

Earlier on Tuesday, Proactiva Open Arms criticized the offer by the Spanish government and said the migrants were in no condition to make the 1,000-kilometer (600-mile) voyage from Lampedusa to the Balearic Islands.

"After 18 days of deadlock, Italy and Spain seem to have reached an agreement designating Mallorca as a landing port. This decision seems totally incomprehensible to us," Proactiva Open Arms said in a statement.

"While our boat is 800 meters off the coast of Lampedusa, European states are asking a small NGO like ours to face ... three days of sailing in harsh weather conditions," it added.

There were initially 147 migrants on board the vessel, but some were evacuated for medical care and all minors were allowed to disembark.