Italy's far-right Salvini moves to round up Roma, Sinti

Interior Minister Salvini has asked regional officials to draw up maps of "illegal settlements." Non-Italians are to be sent back to their countries of origin. 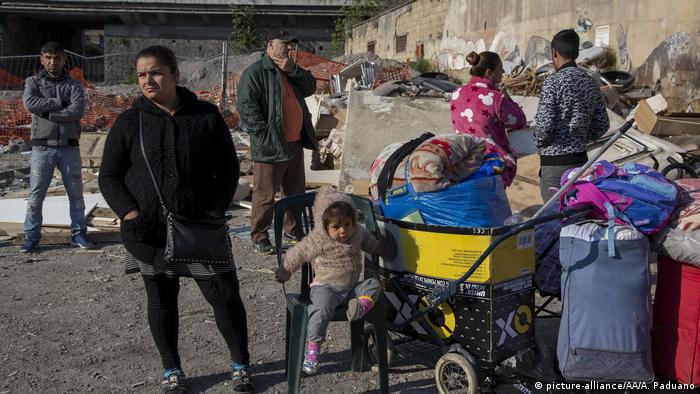 Italy's far-right Interior Minister Matteo Salvini circulated an order on Tuesday for the ministry's regional offices to prepare "a report on the presence of Roma, Sinti and Camminanti settlements" in their areas in the next two weeks, Italian media reported.

The maps are part of Salvini's campaign to "verify the presence of illegal camps to draw up an eviction plan."

Roma, Sinti, and Camminanti are traditionally nomadic ethnic groups that have lived in Europe for hundreds of years.

According to the Council of Europe, Italy has one of the lowest concentrations of these groups in the EU, with a population of between 120,000 and 180,000, according to the AFP. More than half of these people are Italian citizens who have integrated into mainstream society, AFP claims.

Despite this, hate crimes and prejudice against Roma, Sinti, and Camminanti are rampant, particularly against the less fortunate, some of whom still live in unofficial settlements.

Some 26,000 members of these groups were living in emergency shelters or camps across Italy in 2017, according to the advocacy group Associazione 21 Luglio.

Salvini, who is also leader of the far-right Lega party, has called for non-Italians found amongst the Roma, Sinti, and Camminanti to be rounded up and sent back to their countries of origin.

The avowed ethno-nationalist has also tried to curb all non-European immigration to Italy, moving to close down the country's refugee camps and forbid migrant rescue vessels from docking at Italian ports.