Parents in the southern Italian city of Taranto are taking on the Arcelor Mittal Italia steelworks they say is polluting the air and killing their children. 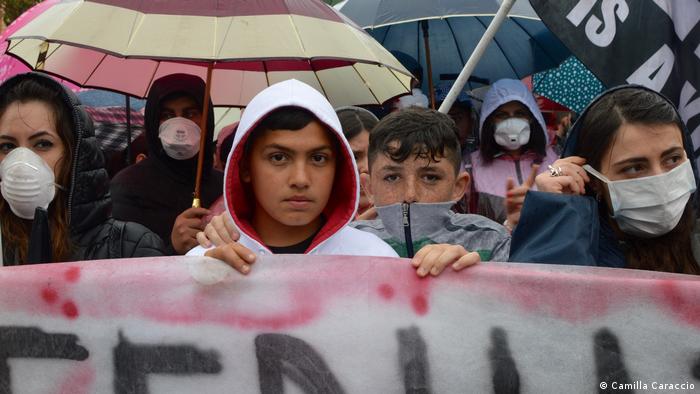 In January, Angelo Di Ponzio lost his 15-year-old son. Giorgio died from a soft tissue sarcoma, a degenerative phenomenon linked to prolonged exposure to dioxin in the air.

"A genocide is unfolding before our very eyes, and the world knows nothing about it," Di Ponzio told DW.

He says his son is just one of many to have fallen victim to air pollution in his hometown of Taranto, in the Puglia region of Italy's deep south.

Time was, the sea-facing city of Taranto was the pulsing heart of Magna Graecia, as the Romans dubbed the coastal region of southern Italy. Today, that grandeur has faded and the location has become synonymous with something quite different.

Ten minutes from the center, in the district of Tamburi, which translates to "drums," a factory spews thick clouds of smoke over buildings stained in various shades of brown.

Conceived as a state-owned property in 1961, privatized by leading steel company Riva Group in 1995, and acquired by private Indian company ArcelorMittal last year, the Arcelor Mittal Italia steelworks, which is known locally as ex-Ilva, sprawls over 1,500 hectares of flatland, making it Europe's largest. 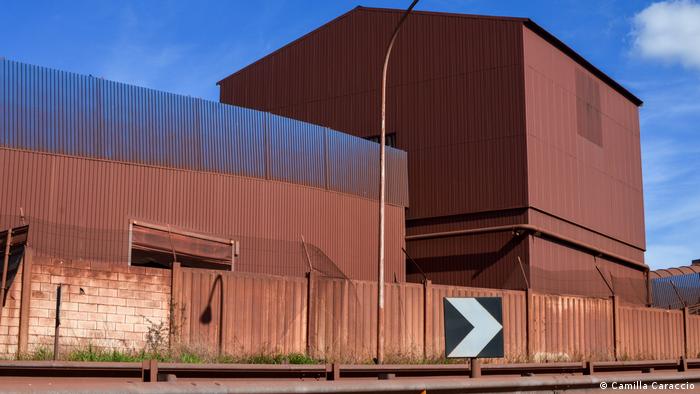 After almost six decades as a factory town, it's only now that residents of Taranto are speaking out against an industrial side-effect the post-war generation long overlooked.

SENTIERI, a mortality study of residents in polluted sites across Italy has been monitoring epidemiological evidence in Taranto since 2007.

Put together by Italy's National Health Institute (ISS) and the Italian Network of Cancer Registries, SENTIERI, has made a connection between Taranto's cancer deaths and exposure to the emission of hazardous gases, including dioxin, a highly toxic persistent organic pollutant (POP).

Back in 2012, epidemiological experts working on the study claimed toxic air in Taranto was killing as many as 80 people a year, both children and adults.

Two years later, SENTIERI released figures that put the local mortality rate in children under 14  at 21% higher than the regional average.

The latest version of the study will be published next July. 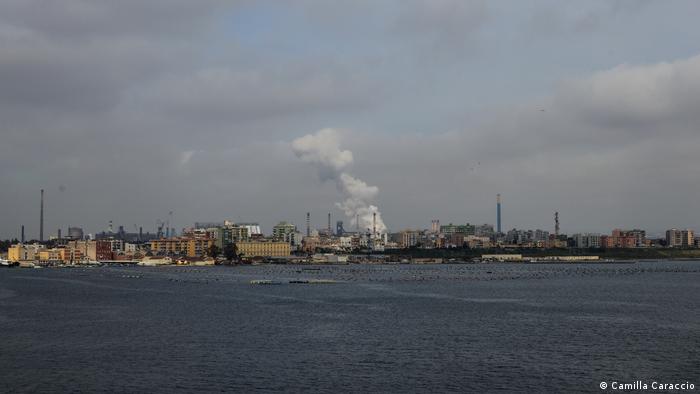 Smoke puffing into the sky on the horizon

Grazia Parisi worked as a pediatrician in the area bordering the steelworks for over 14 years, and clearly recalls the red-brown rust stains she used to have to rinse off her hands after a shift at the clinic.

She also remembers what she describes as the hundreds of parents who would bring in their children at the early signs of atypical coughing, usually observed in adults and heavy smokers.

"I came across brain and bone tumors, lymphomas, leukemia and asthma, but also anomalies hard to put into medical terms," she told DW.

In its most recent publication, SENTIERI says as many as 600 children were born with malformations between 2002 and 2015.

More recently, a detection unit set by Arpa Puglia, the agency for the environmental protection of Puglia found that 2018 dioxin levels rose 916% over the previous year to almost double the European limit.

In September last year, Deputy Prime Minister Luigi Di Maio said that eco-friendly technologies allowing for a 20 percent emissions cut had been set up in Taranto.

But addressing the issue at a press conference earlier this year, green activist and president of collective Peacelink Alessandro Marescotti, said the technology had not yet been installed. "Production and ensuing emissions continue to pose a threat to the lives of citizens," he said. 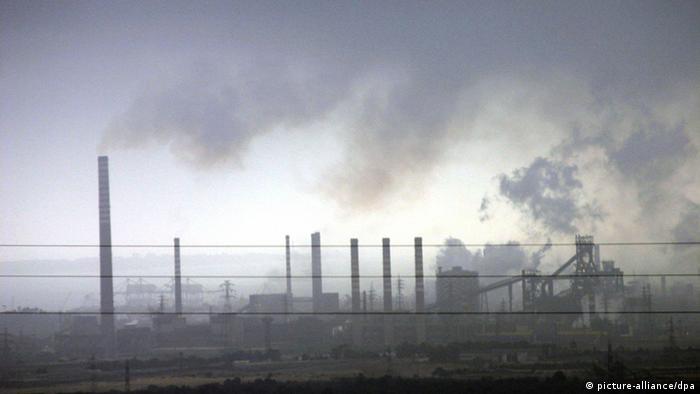 Smog fills the sky over Taranto

Over the past years, the national authorities have issued a dozen "Salva Ilva" or "save Ilva" decrees enabling the plant to carry on with production as usual. And the government under Prime Minister Matteo Renzi even granted the steelworks immunity from prosecution over nonfulfillment of safety measures.

But in January this year, after 182 citizens appealed this ruling on grounds of ill health and deaths they attribute to toxic chemicals coming from the plant, the European Court of Human Rights (ECHR) in Strasbourg convicted the Italian state of failing to protect the health of Taranto's population.

It was ordered to refund legal expenses to majority of plaintiffs, although 19 were not deemed victims as they lived in places not considered to be at risk. Further, the court asked Arcelor Mittal Italia to implement a state-approved environmental plan.

Last week, the company released a statement saying it "strives for net-zero emissions by 2050."

ArcelorMittal had not replied to a DW request for comment at the time of publication.

A social movement for environmental justice

The ruling has galvanized the local community, bringing residents onto the streets of Taranto in their thousands to commemorate the children who are no longer with them.

They're calling for a change in government policies, and asking decision-makers to repeal the steel company's immunity from prosecution. 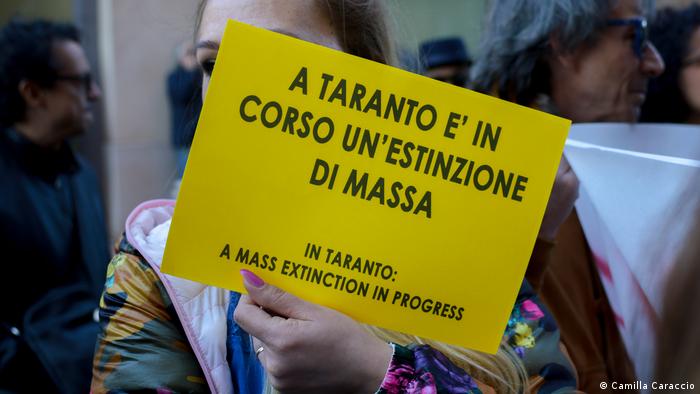 Taranto residents have had enough of living under polluted skies

Some want to see the factory closed altogether, others say it would suffice to shut down the coke oven — the structure most responsible for hazardous emissions.

Francesca Summa is among those taking action. She had lived in Tamburi all her life when her daughter Siria was diagnosed with neuroblastoma, a type of cancer that forms in nerve cells, at just 18 months. When she died in 2009, she was four. Summa eventually left Taranto for the northern city of Genoa, but has been returning to help push for awareness.

"Every time I come home, it strikes me that nothing has changed," she told DW. “It’s like the entire city is collapsing under the system inertia."

In her efforts to draw attention to the realities in Taranto, she's joined forces with Angelo Di Ponzio, who recently set up a charity to help relieve the financial burden on families of affected children, and to raise funds for cancer research. 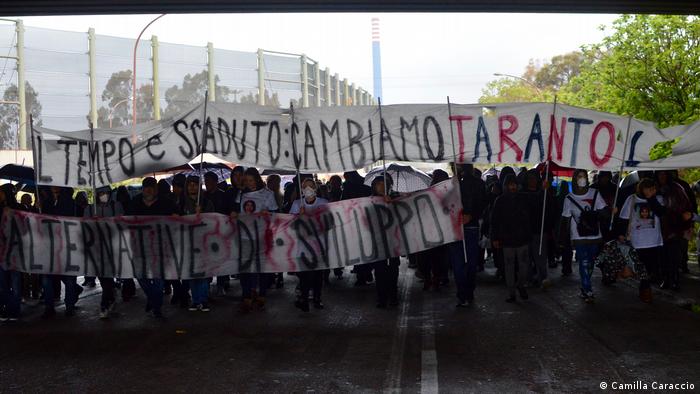 The residents of Taranto have had enough, and now regularly take to the streets to push for change

Di Ponzio is now encouraging local parents to take part in walkouts, marches and non-violent demonstrations to highlight the problem of industrial pollution in the area.

Together with his wife Carla, he has written letters to Italy's President Sergio Mattarella and the Pope, highlighting what he describes as a lack of government commitment to guaranteeing the effective provision of basic human rights.

"Industrial pollution is a key cause of the dramatic changes sweeping the world," Di Ponzio said. "How can we turn a blind eye to the fact that what is happening in Taranto is part of the equation?"

He believes the global campaigns demanding action on climate change make this an ideal moment for Taranto to join the debate at an international level.

"We will never get our children back,” he said. "Yet it’s our duty to ensure future generations the right to breathe again. That is something we know is worth fighting for."