Fed up with fly ash, India villagers fight back against power plants | Environment | All topics from climate change to conservation | DW | 13.02.2019

Fed up with fly ash, India villagers fight back against power plants

A mix of pulverized coal and toxic gases – known as fly ash – are polluting the air and water near power plants in southeast India. Villagers have decided to fight back. Karthikeyan Hemalatha reports from Chennai. 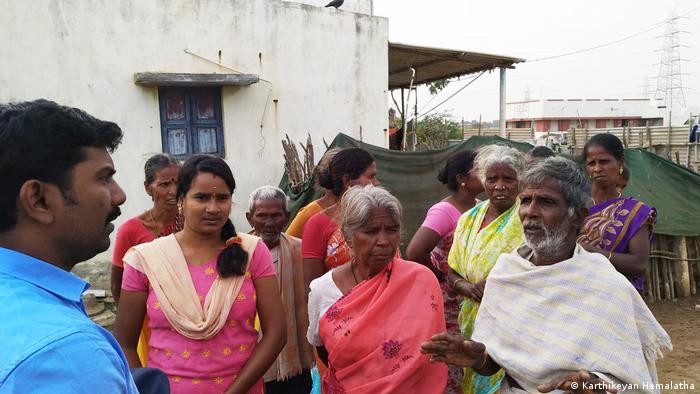 Five long, rusty pipes run parallel to the mud road to Seppakkam, a village of 60 families some 30 kilometers (18 miles) north of Chennai on India's southeast coast. The pipes carry a sludge of fly ash and water. And they're leaking.

The sludge's brown hue adds to Seppakkam's dystopian appearance. The ground is coated in fine ash and dilapidated houses stand empty. Even the hardiest shrubs wilt and there's no sight or sound of birdlife.

"During the rains, the dyke overflows and the sludge enters our house," mother of three D Mariammal says ruefully. "Not to mention the rusty old pipes that are constantly leaking. Cold and cough are our constant companions. Our kids are always itchy."

At least it's winter, she says, otherwise the ash would be driven relentlessly into her home as it is in hotter or wetter weather.

The state government has proposed a plant with a capacity of 1,320 MW to replace Ennore Thermal Power Station, which was decommissioned in 2017. Meanwhile, the other two power stations are generating fly ash that settles over the village.

The fly ash from the coal power plants is a byproduct from the combustion of pulverized coal and is made up of particulate matter and flue gas loaded with heavy metals like arsenic, nickel and manganese. 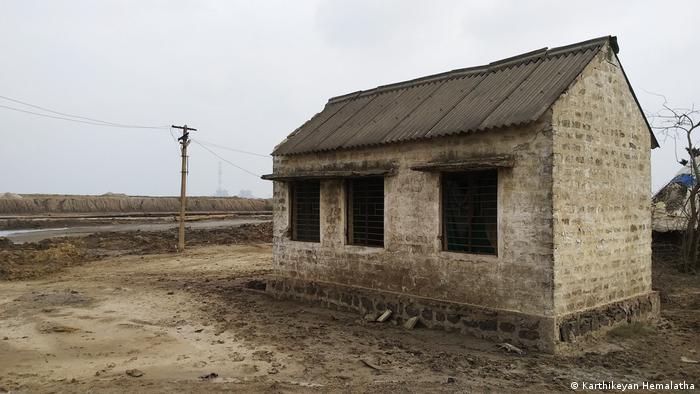 In Seppakkam, fly ash from the North Chennai Thermal Power Station is dumped into a 1,000 acre (400 hectare) pool situated between homes and the sea, and surrounded by a dyke built of mud walls that are frequently breached during the monsoon. In the hotter months, the pool dries out and sea winds blow the fly ash onto homes.

Indian regulations stipulate that coal plants should ensure the fly ash they generate is made available, free of cost, to the cement and concrete industries, so that it's recycled instead of polluting the environment. But only 67 percent of fly ash is utilized in this way across the country, according to the Central Electricity Authority's latest annual report.

Some 344 acres of land and water outside the dyke are contaminated, according to a report by the Healthy Energy Initiative. Fishermen here blame fly ash for poor catches. Studies show it is harming human health, too, causing respiratory issues such as asthma.

The village once relied on salt panning for a living, but many are now working for the energy companies. According to locals, the work is also hazardous.

"My husband used to spray water to put out fires that start on its own in the coal yard," 29-year-old S Nagamma told DW. "He was not given any protective gear save a glove and a mask."

More power plants on the horizon

The place where all of this is playing out is located in Tamil Nadu, a state otherwise considered a renewable energy pioneer. Around 35 percent of the state's electricity comes from renewables and, as of March 2017, it had 7.85 gigawatts (GW) wind power capacity. 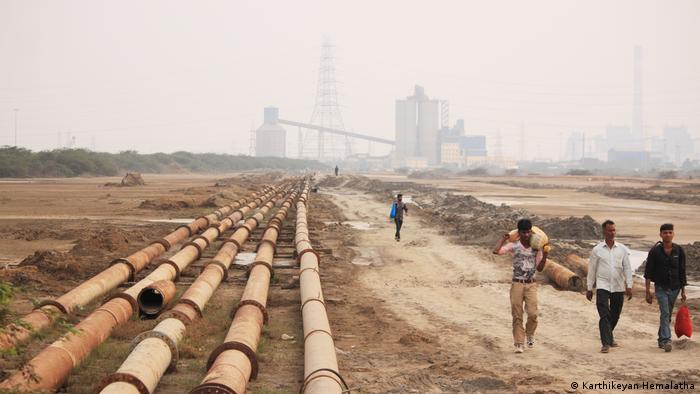 Yet the southeastern state also has at least five thermal power plants with combined capacity of 5,700 megawatts and cost of €5.8 billion euros ($6.6 billion) in various stages of planning and construction. If you include all proposed plants for the state, capacity is nearly four times that.

"If all the proposed coal power plants were to be built, Tamil Nadu will have one plant every 40 kilometers on the coast," says Shweta Narayan, India Coordinator at the Healthy Energy Initiative, a global collaboration of health researchers advocating for the transition away from fossil-fueled power.

As those already living on the doorstep of fossil-fueled power production attest, that's a bleak prospect. So, villagers have begun fighting back and they could be on the cusp of a significant victory.

Locals push back against dangerous conditions

In March 2017, the Tamil Nadu government announced plans to replace the decommissioned 450 MW Ennore power station with a new, 1.3 GW plant. But locals have resisted the plan, with those dependent on local fish stocks among its loudest opponents.

"We realized no one else is going to protest on our behalf," RL Srinivasan, president of the Kattukuppam Fisher Welfare Cooperative Society, told DW. "We saw violations done by the government right in front of our eyes and it was high time we got together."

"Why should we suffer for the electricity demands of big cities? Why can't the government invest more in renewable sources of energy?" Srinivasan says. 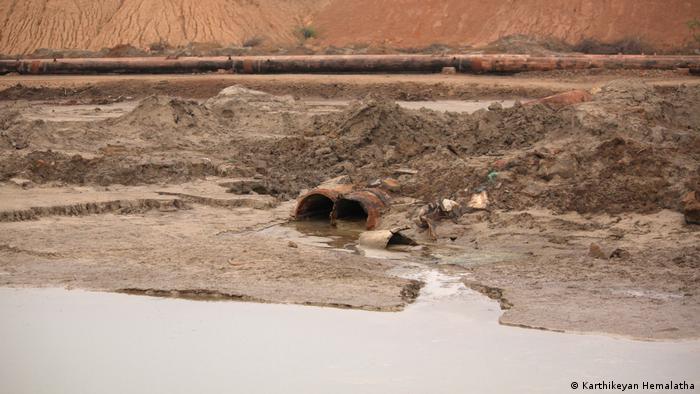 Leaky pipes spill sludge out near the village

The activists accuse the authorities of the state's energy company of fudging air quality numbers and indiscriminately dumping fly ash into the bodies of water that give the fishing communities their livelihoods.

With the help of researchers and activists in Chennai, villagers made themselves familiar with India's environmental laws and what rights they had under them. First, they campaigned against a 7-kilometer conveyor belt that was to bring coal from the Kamarajar Port to be burned at the new plant, delaying construction until its environmental clearance expired.

The project developer, the Tamil Nadu Generation and Distribution Corporation (TANGEDCO), was forced to apply for fresh environmental clearance, which involved a public hearing that villagers used to draw attention to the impact of power plants on their health and environment.

Following a tireless campaign of fact-checking, letter-writing and public protest by the villagers and fishing communities, the Environment Ministry ordered an impact assessment for the planned plant, to examine pollution levels and health impacts in the surrounding region.

"This is a massive victory," Pooja Kumar of the Coastal Resource Center told DW. "For the first time, the cumulative impact of all the thermal plants and industries is being looked at in Ennore." 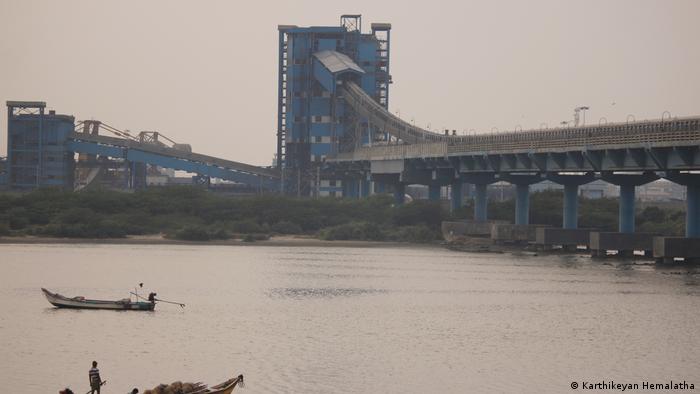 The assessment will look at the 10-kilometer radius around the plant, and will take into account the cumulative environmental impact of plants that are currently under construction as well as their impact once they start operating

Given the number of agencies involved across the industrial zone in Ennore, Kumar hopes these reports will force them see how one plant contributes to the overall environmental impact of their industry.

Delhi is choking in smog

At COP23 in Bonn, the world discusses emissions reductions. Meanwhile, Delhi is experiencing some of the worst smog ever. (10.11.2017)