Italy had one of the highest COVID-19 death tolls in Europe when the pandemic broke out. But while the number of cases is rising across the continent, the country so far seems to be avoiding a second wave. 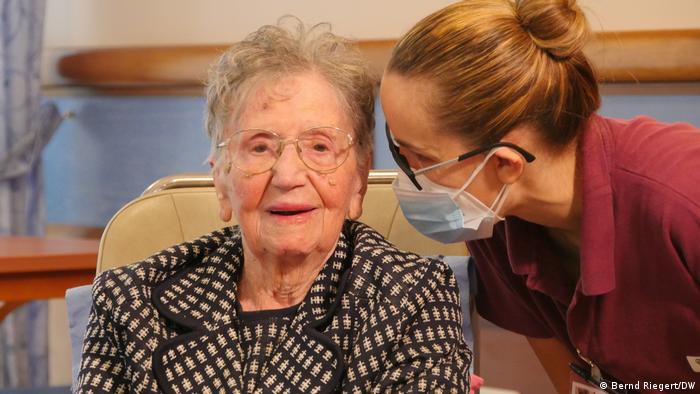 Fatima Negrini was born in 1912, two years before WWI broke out. She has just celebrated her 108th birthday and so far she has survived COVID-19, which has taken the lives of 38,000 of her compatriots. She tested positive in April, though she didn't show any symptoms. "I have basically always been a strong and healthy woman," she said from the San Faustino care home in Milan.

Negrini said God must have forgotten her: "He didn't call me to him. I've still got some good deeds to do, even though I'm in a wheelchair."

"My family is also well," she added, explaining that her sons, who are 79, 88 and 89 years old, were also healthy — as were her many grandchildren and great-grandchildren.

But the lockdown earlier this year was tough, Negrini recalled, because her family could not visit. "That was terrible." 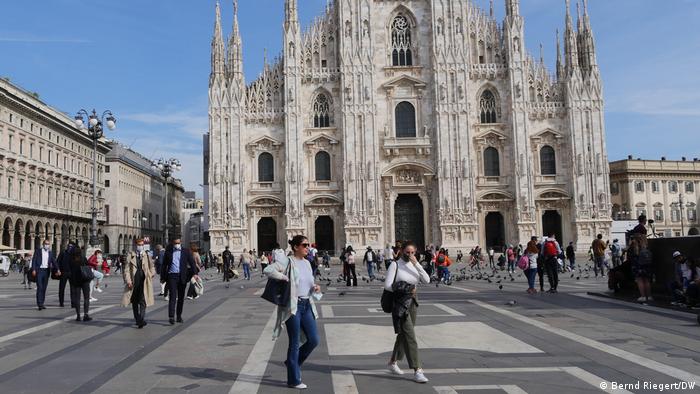 Masks are only partially compulsory in Milan

'Italians are taking the measures seriously'

The strict measures put in place earlier this year to curb the spread of the virus have since been eased. People can move around freely, though they do have to wear masks in buildings and on the streets between 6 p.m. and 6 a.m. in crowded areas. People's temperatures are measured before they are allowed to enter a restaurant, but they are not obliged to leave their names and telephone numbers, which is done in Germany to assist with contact tracing.

Compared to France and Spain, the rate of infection in Italy remains relatively low and does not seem to be rising rapidly. On Wednesday, the daily number of new infections was 1,851. Hospitals are not overwhelmed, and there are only a few COVID-19 patients in intensive care. The COVID-19 fatality rate also remains low.

"We haven't yet started to experience a second wave," said Maria Rita Gismondo, who runs the COVID-19 lab at the Luigi Sacco University Hospital in Milan. She thinks that one reason Italy is faring better than its neighbors is that Italians learned from the high death rates in March and April.

"We needed a month before we understood what was going on and figured out how the virus was spreading," she told DW. "The psychological effect is very important. In the first phase, people panicked about getting infected. They stopped seeing other people entirely. Now people are feeling better and more secure, because we know that we can keep the situation under control."

She added that now there is more testing, greater routine and better treatment methods. Whereas in April the clinic had 120 patients in intensive care, now there are only five.

From what Gismondo has observed, people in Milan and Lombardy seem to be adhearing to the rules: wearing masks, washing their hands and maintaining social distance. "I think that the Italians are taking the measures seriously, and that's why we have this relatively good situation at the moment," Gismondo said. 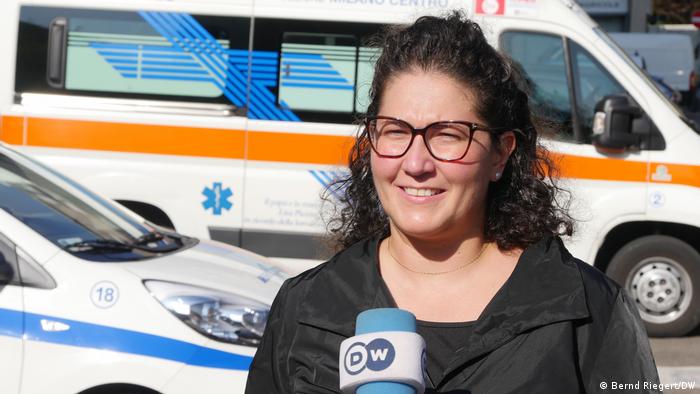 Vanda Gatti describes how the deadly outbreak came like a 'tsunami'

'We can cope if we stick to the rules'

Even though it is not compulsory, many people in Milan are wearing masks. Scenes of students and young people partying on the streets are rare. Police patrol the square in front of the Basilica of San Lorenzo Maggiore, a popular gathering place for young people. There is also an amplified police presence in front of Milan's famous cathedral, where only small groups are gathered.

"We know that we can cope if we stick to the rules," volunteer paramedic Vanda Gatti said. At the start of the pandemic, Gatti worked 12-hour shifts alongside her job as a commucations advisor and transported patient after patient with COVID-19 to the hospital. "We had a traumatic experience. It was like a tsunami. Now we're more cautious." 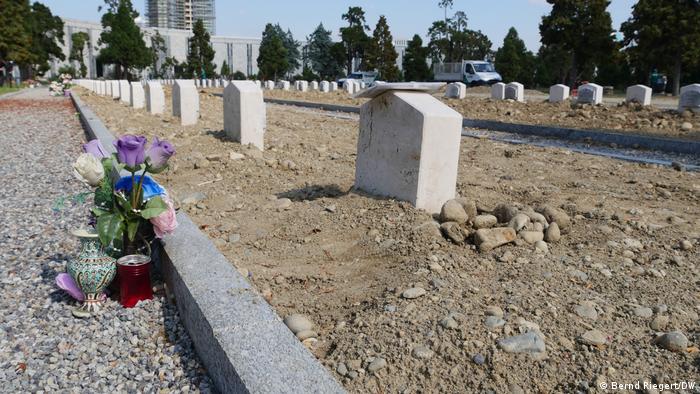 At Campo 87, the graves of hastily buried COVID-19 serve as a stark reminder for Milan residents

However, Gatti said she was worried that people in southern Italy were taking fewer precautions than those in Lombardy, which saw half of the nation's deaths.

The "Cimitero Maggiore di Milano," Milan's largest cemetery, which is not far from the university hospital, is a warning of what could happen if people are not cautious. One section, "Campo 87," contains the graves of 125 unknown people who were buried in a hurry during the initial phase of the pandemic; either the relatives of the deceased could not be found, or they were unable to organize funerals because they themselves were ill or in quarantine.

Italy's pandemic laws prevents the burried individuals from being relocated for at least two years. The city is currently deliberating whether to turn the space into a permanent monument to commemorate the victims of COVID-19. 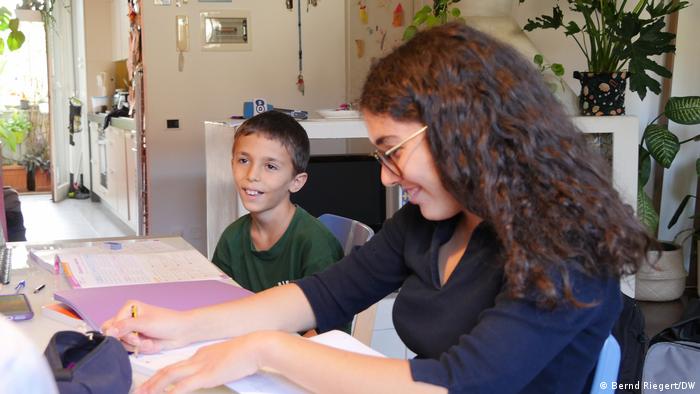 Matteo and Vittoria are keen to not go through another lockdown

Fears over another lockdown

Italian authorities want to avoid having to impose a second lockdown that would restrict people's autonomy and freeze economic activity. They also want to keep schools open. To this end, schools are being equiped with rapid COVID-19 tests that provide results within 15 minutes. This should hopefully prevent whole classes and teachers, as well as their family members, from being forced to quarantine.

"A new lockdown would mean having to be locked up with my family again and doing homework all day,"  "Anything but being locked up again," 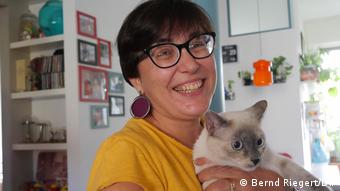 His 14-year-old sister Vittoria says that most of her schoolmates share the same fear and that's why they're doing they best to stick to the rules even if it is not easy. During the lockdown, she had to take her exams via video link and she even changed school "It was particularly difficult because I couldn't get to know the other pupils," she recalls but now she has made friends with whom she cycles and plays games outside.

The children's mother Elena di Mauro Morando is herself a teacher who had to continue working from home. She does not want another lockdown either and is hoping that the numbers, which she follows on the news each evening, will remain low.

"Everyone should be well again and we will hopefully not have to wear masks," hopes Matteo.

Adapted from the German by Anne Thomas

Possessing Neanderthal genes can increase the chances of suffering a severe form of COVID-19, a new study out of Germany has shown. People with this genetic cluster are three times as likely to need a ventilator.

The controversial former Italian Prime Minister sold AC Milan in 2017 and bought a third division club a year later. Little known AC Monza have now clinched promotion to Serie A, and Berlusconi is back in the limelight.