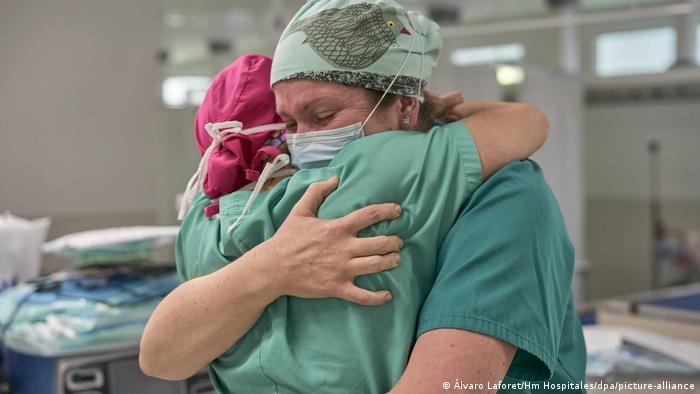 Once again, the 6.6 million residents of Madrid find themselves at the European epicenter of the pandemic. Surgeon Dr. Angela Hernandez knows why.

"Around 3,000 people were in Madrid hospitals on September 22 alone, around 400 of them in intensive care," Hernandez said. "We are at our limit."

From the beginning, coronavirus tests were not offered at airports in Spain, as they were in Germany. Instead, they were reserved for primary care offices and suspected coronavirus cases to avoid overburdening the small number of laboratories that could process the tests.

People in Madrid are frustrated that things have gotten worse again. They've been disciplined about following health safety rules. That includes wearing the obligatory mask.

"The fact that nobody expected the pandemic in March, although it was announced, is still understandable," says Hernandez. "But that the politicians have learned nothing is disappointing."

The mother of three complains relentlessly about how poorly medical personnel are paid in the majority of Spain's 17 autonomous regions. 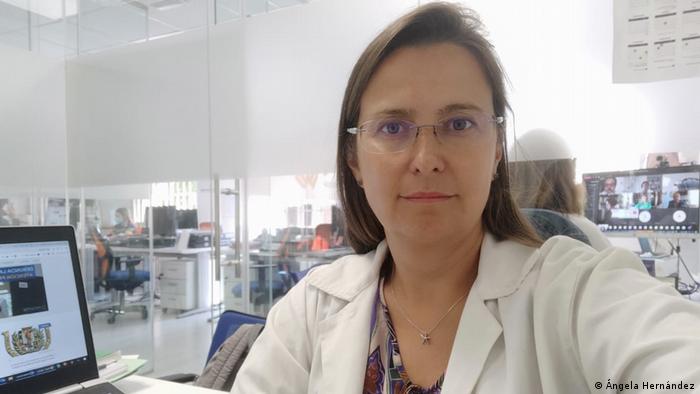 This is partly because Spanish citizens are not expected to pay much for health care. Everyone pays into the public health care system, but much less than people in Germany, for example. Someone who is self-employed pays around €300 ($349) a month, which also covers their pension.

"The tightly calculated Spanish health care system is designed to ensure that threatening illnesses are quickly detected and treated," says health expert Alberto Gimenez, head of the foundation Economía y Salud (Economy and Health) in Madrid. "But we have no resources for prevention and rehabilitation."

In Spain, and especially Madrid, everything is concentrated together in very little space. "Many people share small apartments with others because rent is expensive," says Dr. Hernandez. "That's how they get infected." This explains the high infection rates currently seen in working-class neighborhoods like Carabanchel, she says.

Policies at health care centers are another factor. To take some of the burden off hospitals, specialist referrals are made through these facilities. But the steady stream of patients has made them a primary source of infection. As a result, there are hardly any open consultation hours, which in turn leads to many undiagnosed diseases.

"And there is a long list of operations still waiting to be performed," Hernandez says. This means the collateral damage from the pandemic is likely to be high over the next months. 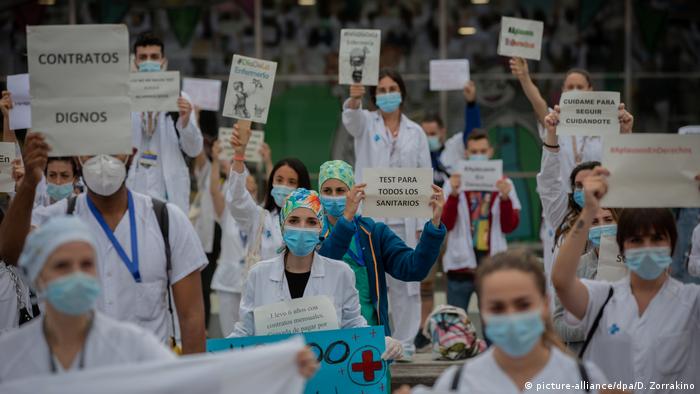 Considering the poor learning curve all levels of Spanish politics have shown during the pandemic, it's no surprise that in March and April many doctors, nurses and caretakers were sick of the daily applause coming from people during the lockdown.

"We all have to pay more to make this work in a pandemic," says Hernandez.

Germany, meanwhile, has had a clear advantage in the pandemic crisis. The country can afford overcapacities, and a comparatively inefficient system, which was a problem before the pandemic, but which is now an advantage.

Germany has around 34 intensive care beds per 100,000 inhabitants, while Spain has just under 10 (see chart). While hospitals in northern Europe are smaller and well distributed among the population, in Spain they are concentrated in the large cities. In rural areas, there is a shortage.

Still, prior to the pandemic, the Spanish system functioned better than Germany's. Spain has the second- highest life expectancy in the world after Japan. Madrid and Barcelona are home to many medical research projects. The country has many top international hospitals. And all of this at a relatively low cost. 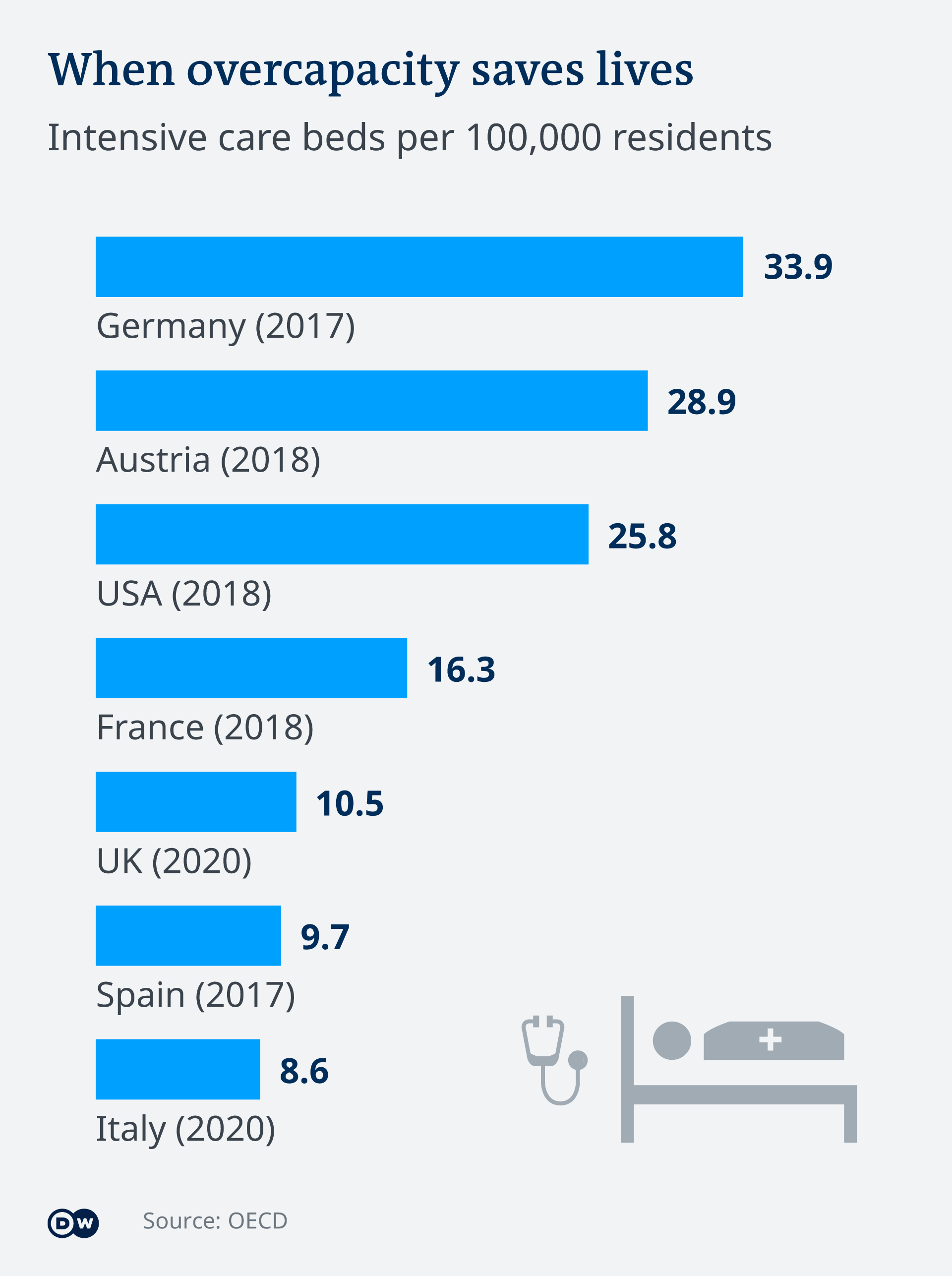 Digital progress, but not everywhere

But the pandemic has made it clear that Spain lacks an institution like Germany's health departments, which are tasked with overseeing health and medical actions in German states and cities.

Much has already been done in Spain when it comes to digitalization and data collection: Prescriptions are automatically loaded onto health insurance cards, doctor appointments are scheduled online, and in Madrid there is even a digital patient file.

"It is incomprehensible that we don't have a system to track and control those infected," complains Rosa Gomez Honrato, a nurse at the Plataforma de Centros de Salud de Madrid, which promotes primary health care interests.

This summer, the government in Madrid wanted to have volunteers take over the tasks of a health department. For now, soldiers have been deployed for this purpose.

"The main thing is to save money. But in practice, we're the ones in the health care centers who are noting down data, without any rhyme or reason, then calling everyone up afterwards," the nurse says. "We lose a lot of time trying to write down 15 Chinese last names correctly."

The overworked medical staff in Madrid wants to strike.

"We know it's not the right moment," says Hernandez.  "But since we haven't seen any improvement since March, it's the only leverage."

But now legal action is being taken against the regional and central government for mismanaging the health crisis. 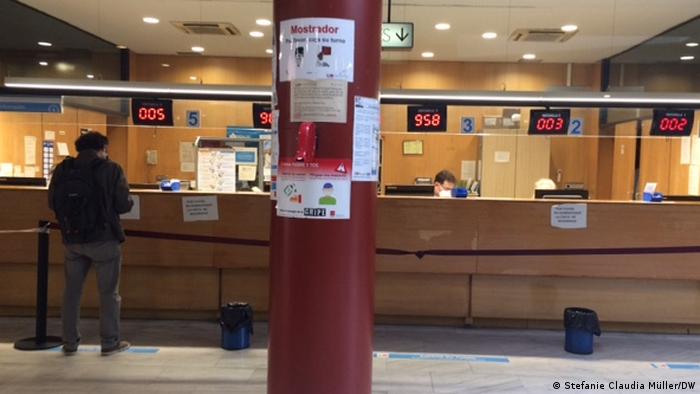 But Spain is not a risk

Despite all the horror stories reaching Germany through the media, Spain does not pose a risk in this pandemic.

"Nowhere else are people being so conscientious. Everyone here wears a mask — no matter where they go," reports former TV journalist Sabine Christiansen, who spent the lockdown on the Spanish island of Mallorca and is still there.

"The rules were and are strict. That's good," she said. "I feel safe here."

The same goes for American TV actor Michael Douglas, who has been living with his family on his Majorcan estate for several months, according to reports by a Spanish newspaper.

Despite COVID-19, without a question, Spain is still the country that, unlike any other, encourages people from all over the world to stay — and not just for economic reasons. Above all, it's because of the Spanish way of life. People continue to fill the cafes and bars of Madrid, even if that means wearing a mask and keeping distance from each other.

This is what Claudia Haubner, a German who lives there, keeps saying to worried family members back in Bavaria when they tell her all the bad things they have heard about Madrid.

"I think that we've all reached our limits, no matter where we're living out the pandemic right now," Haubner says. "Creating more panic doesn't help."

Adapted from German by Kristie Pladson