Prosecutors in Rome have put five members of Egypt's secret service under investigation for their role in the killing of student Guilio Regeni. The victim, a doctoral student, was abducted, tortured and killed in 2016. 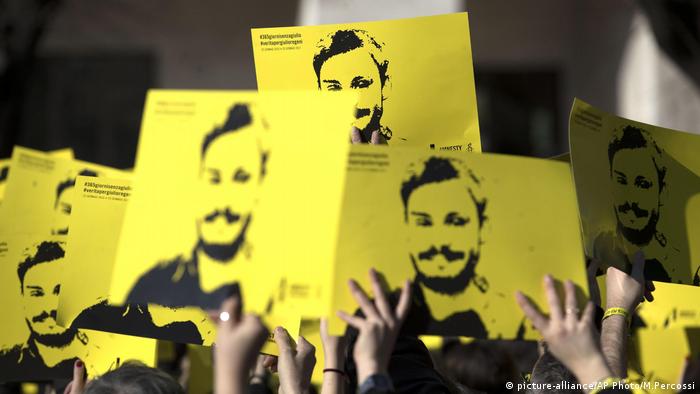 On Tuesday, Italian prosecutors in Rome announced they were formally opening their own investigation into five Egyptian security officers for their involvement in the 2016 disappearance, torture and killing of 28-year-old Italian student Guilio Regeni.

Italian authorities have grown increasingly impatient with their Egyptian counterparts for the slow pace of Cairo's investigation into the circumstances surrounding Regeni's disappearance and death. Egypt has vehemently denied any involvement in the killing — first saying that Regeni had been killed in a traffic accident, then claiming that he had died in a police shootout with gangsters who had abducted him.

Rome's move is sure to ruffle feathers in Cairo. Egyptian authorities have repeatedly denied Italian requests for permission to open an investigation. In April 2016, Italy went so far as to recall its ambassador to Egypt in protest, though a new envoy was named one year later.

Regeni, a post-doctoral student at Cambridge university, was in Egypt conducting research on Egyptian trade unions at the time he disappeared. After being abducted, he was tortured for several days before his dead body was discovered a week later alongside a desert highway north of Cairo.

Italy has officially placed five members of Egypt's security services — including a general, two colonels and a major — under investigation for Regeni's abduction. Italian prosecutors have not yet said if they believe the men were also involved in the student's death. Italian law makes clear that such investigations do not automatically imply guilt, nor do they automatically result in a criminal trial.

Regeni was abducted on January 25, 2016, the fifth anniversary of the uprisings that brought down President Hosni Mubarak, who ruled the country for 30 years. It is suspected that Regeni's contacts with trade unions and research into alternatives to the state and the military's iron grip on the economy may have been linked to his disappearance and subsequent killing.