Italy has allowed 10 rescued migrants on the Sea-Watch 3 to leave the vessel. Two pregnant women and two sick men are among those who have been given permission to disembark. 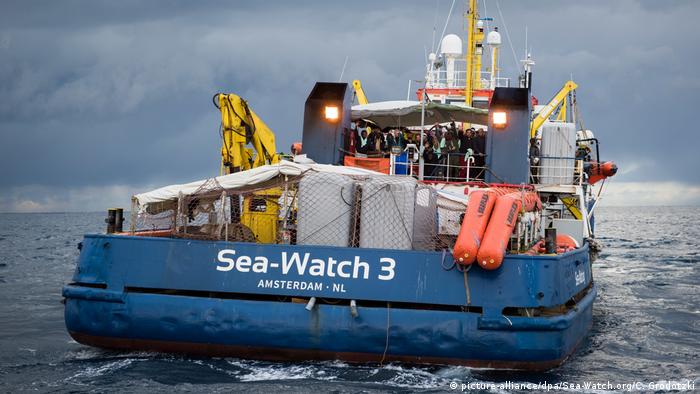 Among the 10 were two pregnant women, three minors and two sick men. The group was allowed to disembark on the Mediterranean island of Lampedusa, which lies between the Italian mainland and the North African coast.

The Sea-Watch 3 rescued more than 50 migrants drifting in an inflatable dinghy off the coast of Libya on Wednesday, but Italy's populist government did not allow the ship to enter an Italian port.

Earlier on Saturday, the Italian coast guard had conducted a medical check on board, according to Sea-Watch spokesman Ruben Neugebauer.

The boat is currently waiting at sea near Lampedusa.

On Friday, several German cities had offered to take in the migrants, but it is the federal government that decides such matters.

On Thursday, Salvini, who is also the leader of the far-right League party, ordered Italian law enforcement to prevent the boat from entering Italian waters.

Salvini's popularity has risen over the last year after he adopted a hard line against migrants, which includes closing ports to rescue vessels.

On Saturday, he announced on Twitter that he had signed a decree banning the Sea-Watch 3 from entering Italian waters.

"I have just signed a ban on the entry, transit and berthing of the Sea-Watch 3 in Italian territorial waters, as provided for by the Security Decree," he wrote.

The decree still has to go before Italy's parliament, where the coalition government holds the majority.

Salvini has said asylum-seekers sailing from Libya to seek safety in Europe should be returned — an order that is contentious under international law.

Sea-Watch has repeatedly said it would not land survivors in Libya as it did not consider Tripoli a port of safety.

Following a summit, Southern European leaders on Friday called for a fair distribution of migrants arriving via the Mediterranean Sea, as the latest NGO boat carrying rescued families was denied a safe port by Italy.

The leaders of Cyprus, France, Greece, Italy, Malta, Portugal and Spain said the European Union should "guarantee effective implementation of the principle of solidarity and fair burden-sharing between member states."

Since 2014, more than 12,000 people have died trying to flee Libya for Europe via what the UN refugee agency calls the "world's deadliest sea crossing".