Both Italy and Croatia have seen large jumps in virus cases in recent weeks after a summer lull. The groups taking part in the protests say their human rights and freedoms are under threat from preventative measures. 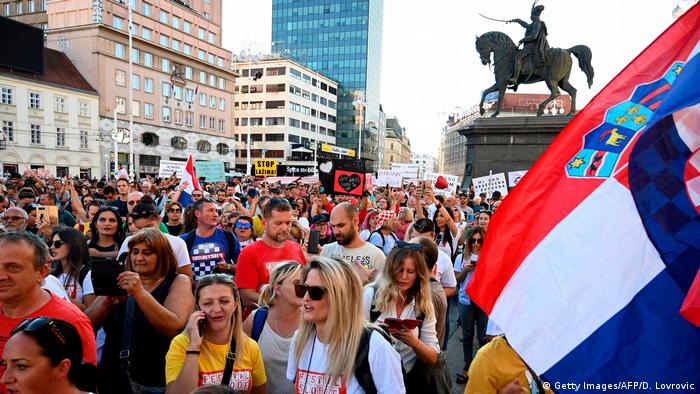 The capitals of Italy and Croatia were both hit by protests against coronavirus-prevention measures on Saturday.

In Rome, a demonstration of about 2,000 people was organized by various groups. The protest called for an end to the wearing of masks, physical distancing and potential vaccinations against the illness. Some protesters said the country had turned into a "health dictatorship."

Italian Prime Minister Giuseppe Conte expressed his displeasure with the protest. "We are dealing with an ongoing pandemic," Conte told Italian news agency ANSA. "There is a demonstration in Rome today by people who believe it doesn't exist. We will answer them with data."

Read more: COVID-19, cold, or flu symptoms: Should I see a doctor?

Foreign Minister Luigi Di Maio said the protesters should show more respect to victims and their families. "I call on the coronavirus deniers to at least show respect for the families of the dead," said Di Maio during a speech in the southern city of Foggia.

Italy has recently seen its largest daily case increase since early May. Health authorities on Saturday said there were more than 1,700 new cases on Friday.

'We insist on safeguarding human rights'

Several thousand people also rallied against preventative measures in Zagreb on Saturday. They said the measures to prevent the spread of the novel coronavirus were a threat to their human rights and freedoms.

"COVID is a lie, we are not all covidiots," said some of the protesters, referencing what some people have called those who do not follow prevention measures.

"We insist on safeguarding human rights, freedoms, knowledge, solidarity and mutual respect," read a statement from the group that organized the event, dubbed the Festival of Freedom.

Croatian authorities were not pleased with Saturday's rally. "All temporary restrictions had only one goal — to protect the health and lives of Croatian citizens. We succeeded in that," said Health Minister Vili Beros in a Facebook post.

The country has implemented rules that demand that people wear face masks while on public transportation and in shops since mid-July. After the summer months with very few daily cases, Croatia has seen the infection rate climb. The nation of 4.2 million people saw a daily record of 369 new cases on Thursday.

The World Health Organization has insisted it will not endorse a vaccine before it's shown to be safe and effective, as nations race to develop the means to end the global pandemic. Catch up on the latest on COVID-19.