′It was a good day for Tunisia,′ says chief EU election observer | World| Breaking news and perspectives from around the globe | DW | 25.10.2011

'It was a good day for Tunisia,' says chief EU election observer

Tunisia was the first Arab nation to hold free elections after ousting its authoritarian ruler in the wake of this year's popular uprisings. The head of the EU observation team believes the polls sent a powerful signal. 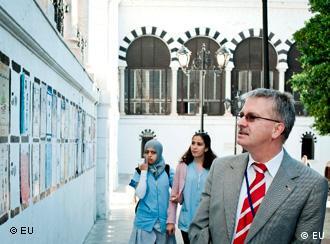 Michael Gahler is a conservative German MEP, who heads the EU's election observation mission in Tunisia. He has been a member of the European Parliament since 1999 and now works on its Foreign Affairs Committee, amongst others.

Deutsche Welle: More than 90 percent of the 4.1 million registered voters turned out to vote. Have Tunisia's first free elections been free and fair?

Michael Gahler: It is a joyous occasion. We spoke with people who stood in line for hours and they were all happy. And for most of them it's the first time that they have participated in an election - they never took part in one of Ben Ali's sham elections. It's a good day for Tunisia. We as election observers are currently in the process of counting the ballots because that is the decisive point in the political discussion in Tunisia: Are the elections transparent? Transparent means until the last moment, from the determination of the result at the polling station to the total result in the electoral district. There have been some delays because the turnout was so large in the electoral districts, where those who had been pre-registered voted. In addition, there have been a few small irregularities because records of the results were sealed and stuck in the ballot boxes. That's actually not supposed to happen, but those are beginner's mistakes. They don't have a negative impact on the quality of the election, but they do delay the process of counting the votes.

Has there also been talk of electoral fraud? There was a lot of fear of that.

I believe that the system, as it is currently set up, is very transparent. The election results were shown outside the polling stations so that they could be seen by every Tunisian. Observers were there every step of the way. I have been convinced that for example in the electoral district 'Tunis 1' all the records of the elections results came in and were tabulated under observation. In the end, the results from every individual polling station will be put on the internet. In that way, you can really talk about transparency and that no fraud took place in the process. 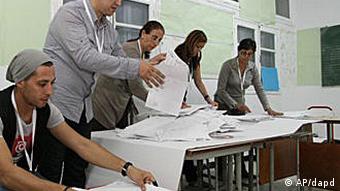 Minor irregularities should not affect the quality of the vote, Gahler says

How does the process continue once the votes have been counted?

What signal does the execution and end result of the election send to other Arab countries?

I think it sends a very strong and convincing signal. People who have liberated themselves from authoritarianism have managed to create a legitimate framework for their leadership within a good nine months. The election was prepared independent of the existing structures, and it was not necessary to rely on the existing electoral structures. The Tunisians wanted to separate themselves from the people who stand for the old era. There are people in the electoral commission who championed democracy and even returned from exile to help put Tunisia's democracy on its feet. And that sends a very clear signal to other Arab countries: If you want to have not just a revolution, but also a sustainable democratic framework, then organize yourselves like the Tunisians.

Will the Tunisians as well as the West accept the results of these free elections regardless of how they come out in the end?

It is not just about whether we election observers accept the result. The Tunisians must feel that the result on Tuesday is their result. And if that is the case, then not only does the constitutional assembly have to be carried out on this basis, but it is also the task of the West, the neighboring countries here and also the international community to continue working with Tunisia on this foundation in order to consolidate democracy.

In Tunisia's first free elections, the people appear to have handed victory to the Islamist party, Ennahda. Rainer Sollich, head of DW's Arab Service, asks whether this is a cause for concern. (25.10.2011)

Hope and anxiety go hand in hand in Tripoli

With the war over and the official announcement of Libya's liberation, the country is looking ahead, albeit with a shade of uncertainty. For the people on the streets all that matters is that Gadhafi's rule is over. (24.10.2011)