Tunisia's main Islamist party has claimed victory in the country's first free election since former dictator Ben Ali was forced out in January. The party has said it's open to an alliance with the top secularist parties. 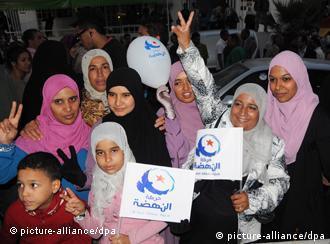 Tunisia's main Islamist party, Ennahda, which until early this year was banned and had hundreds of followers in prison, has claimed victory in the country's first democratic election.

Though official results are not expected until Tuesday, the moderate party said its workers had tallied results posted on polling stations after Sunday's vote and claimed to have the largest share of votes. Party officials estimated Ennahda had taken at least 30 percent of the 217-seat assembly, though some estimates placed that number closer to 50 percent.

Maya Jribi, the leader of the secular center-left PDP party, seen as Ennahda's main challenger before the vote, has conceded defeat. "The trend is clear. The PDP is badly placed. It is the decision of the Tunisian people. I bow before their choice," she told AFP.

The vote marked the first free election in the Arab world since uprisings began in Tunisia in January. The revolution ousted longtime dictator President Zine El Abidine Ben Ali and subsequently inspired revolt throughout the region. 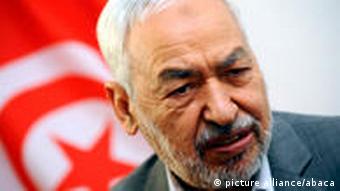 Ennahda's critics have accused the party of preaching radicalism in the mosques and see the resurgence of Islamists as a threat to modern, liberal values. Party officials, however, have said they are open to forming an alliance with two secularist parties, Congress for the Republic and Ettakatol. Both parties are expecting to get about 15 percent of the vote.

"We will spare no effort to create a stable political alliance," said Jlazzi. "We would like to reassure our trade and economic partners, and all actors and investors, we hope very soon to have stability and the right conditions for investment in Tunisia."

"We respect the rights of women ... and equality between Tunisians whatever their religion, their sex or their social status," his colleague Nourreddine Bhiri told AFP.

Party leader Rachid Ghannouchi, who was forced into exile for 22 years by Ben Ali's police, has said Ennahda will not enforce any morality code on Tunisian society or its millions of Western tourists. He likens his party's approach to the moderate Islamism of Turkish Prime Minister Tayyip Erdogan and his ruling Justice and Development Party.

Sunday's vote, designed with checks and balances to prevent any one party from obtaining a majority, was to elect a constituent assembly for a term of one year.

The assembly, expected to include as many parties as possible, will draft a new constitution and appoint a new interim president and government to run the country until fresh elections late next year or in early 2013. It will also have interim authority to write laws and pass budgets.

The current interim government will stay in power until the assembly appoints a new president, which is not expected before November 9.

Standing amid supporters shouting "God is great!" outside Ennahda headquarters, Zeinab Omri, a young woman wearing an Islamic head scarf, told the Reuters news agency that the vote was "an historic moment."

"No one can doubt this result. This result shows very clearly that the Tunisian people is a people attached to its Islamic identity."

In Tunisia's first free elections, the people appear to have handed victory to the Islamist party, Ennahda. Rainer Sollich, head of DW's Arab Service, asks whether this is a cause for concern. (25.10.2011)

Tunisians have voted in elections for an assembly that will shape their country's constitution and appoint a government. Whether or not the country is set to take a secular or Islamist path remains unclear. (23.10.2011)

As the birthplace of the Arab Spring, Tunisia is something of a yardstick in the region. All eyes will be on the North African country on Sunday when it stages its first post-revolution elections. (23.10.2011)