Hope and anxiety go hand in hand in Tripoli | World| Breaking news and perspectives from around the globe | DW | 24.10.2011

Hope and anxiety go hand in hand in Tripoli

With the war over and the official announcement of Libya's liberation, the country is looking ahead, albeit with a shade of uncertainty. For the people on the streets all that matters is that Gadhafi's rule is over. 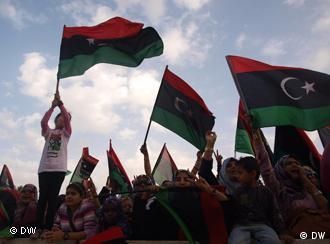 Will the jubilation last?

"The war is over, that's all that matters today," Adel Zarti, a Tripoli resident, told Deutsche Welle from his grocery shop in the city's downtown area. Nonetheless, the 37-year old admits that it had come as a surprise that the official announcement of the end of the war came from Benghazi - the country's second city.

"Benghazi was the first city in Libya to rise up against the dictator. I guess that's why everything is taking place over there," he explained from his shop, a stone's throw away from Martyrs' square.

True or not, the difference in the mood in Tripoli was tangible compared to the previous weeks, after rebels took over these streets.

Two months after the rebels first converged on these streets, Tripoli has almost come back to normal. Water supply may still be far from guaranteed but shops are open, barbers are back and, what's more important for Abdulrahman Fahim, a taxi driver, the price of petrol has dropped to a mere 0.15 Libyan dinars per litre (7 cents ). 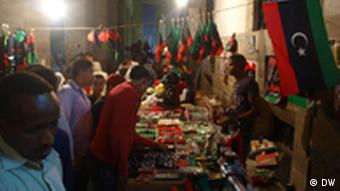 Life is slowly getting back to normal

Some other changes may look less functional but are undoubtedly more symbolic.

"Did you know that the people from Misrata have taken with them the statue of the fist?," says Fahim while we drive by Gadhafi's recently demolished former bunker of Bab al Aziziyah.

The statue that marked the capital's bombing by US aircraft in 1986 today stands in Misrata's Tripoli street - the obliterated avenue that has become a symbol of the brutal siege by Gadhafi's troops on the rebel enclave.

But over the past few days Misrata boasted a much more meaningful "trophy." The freezer that held Gadhafi's body had turned into a macabre "shrine" where people queued to touch, kick or even let their children jump over the former ruler's dead body.

There's been much talk these days whether Gadhafi's alleged brutal execution was right or not. In addition to video footage showing him wounded but still alive after he was captured, recently released graphic documents add to the list of alleged evidence of his mistreatment before he died.

Nonetheless, debate on the issue goes beyond his right to be put on trial:

"Who gave Misratans the right to kill Gadhafi themselves? Why couldn't we Tripolitans, the Nafusans, or the guys from Benghazi take part in the execution too?," a young bearded fighter from a checkpoint in downtown Tripoli told Deutsche Welle.

A new Libya is born 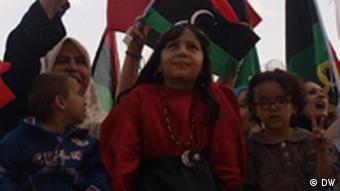 Libyans are hoping for a better life

"They say we are all free know but it seems to me that, as usual, that's a privilege reserved to the men," lamented 20-year-old Doha Hassan. "Is this the Libya our brothers have died for? We have oil but we'd rather follow the Turkish model of the democracy, and not Saudi Arabia's," Hassan told Deutsche Welle. The young girl added that she's not going to university to hide under a niqab - the full-face Islamic veil - for the rest of her life.

"They have also scheduled elections for June 2012 but we still haven't got a population census, an electoral law… not to mention political parties," added fellow student Bashar Masnawi.

Libya's neighbor Tunisia was the first of the Arab Spring countries to go to the polls on Sunday, but that didn't stop Sharid Doshman from leaving his native Tunis behind a week ago to come to Libya to work.

"I think the situation will get better by the day here," the 50-year old said from the hotel where we works as a waiter. "This can turn into a land of opportunities. Libya is rich in oil, Tunisia isn't," he added.

Others, though, don't share his point of view. "If it's finally true that we're going to be given 10,000 dinars I will use those to leave the country for Europe or the United States," a young Libyan called Ahmed said from a downtown Internet café.

"I swear I won't come back until we get the country we deserve."

Syria's state-run media has almost totally ignored the news about the violent death of Libya's dictator. However, opposition demonstrators are hoping to gain new impetus for their struggle against Bashar al-Assad. (24.10.2011)

The European Union says it will uphold its commitment to the rebuilding of Libya following the fall of Sirte and the death of Colonel Gadhafi. (20.10.2011)