Israel's military says it carried out airstrikes in Syria to stop an attack by Iranian kamikaze drones. The Jewish state has, however, stayed silent on Lebanese reports that two Israeli drones crashed in southern Beirut. 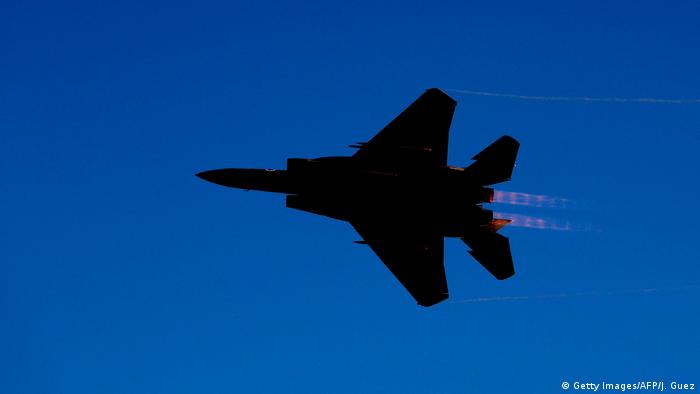 Israel's military said on Sunday that its fighter jets attacked targets in Syria a day earlier in order to prevent what it described as a "very imminent" drone attack by Iran.

In a briefing to reporters, military spokesperson Lt. Col. Jonathan Conricus said Israel had, for months, been monitoring an Iranian plot to send explosive-laden attack drones into the Jewish-majority state.

He described the threat, which had allegedly been planned by Iran's Revolutionary Guards, the Al Quds force as well as allied Shiite militias, as "significant."

Lebanon: Why Refugees are Destroying their Houses

He added that the Israeli strikes were aimed at "a number of terror targets and military facilities" in the area southeast of Damascus.

The Syrian Observatory for Human Rights, a Britain-based monitor, said the air raids killed two Hezbollah members, an Iranian, and two other fighters.

Israel has carried out hundreds of airstrikes against Iranian targets in Syria over the past years, but Saturday's appeared to be one of the most intense.

Israel, meanwhile, refused to confirm reports that its military had sent drones into Lebanon early on Sunday morning, targeting the Beirut stronghold of the Iran-backed Shiite group Hezbollah.

A spokesperson for Lebanon's army said: "two drones belonging to the Israeli enemy violated Lebanese airspace ... the first fell while the second exploded in the air causing [only] material damage."

Hezbollah leader Hassan Nasrallah said his group would make sure Israel sent no more drones over Beirut, calling the incident the first clear and dangerous violation of rules since Hezbollah and Israel fought a monthlong conflict in 2006 in which more than 1,300 people died.

He also confirmed the death of two Hezbollah members in the Israeli airstrikes in Syria and promised retaliation, speaking of a "new phase" in the conflict with Israel.

"The new aggression ... constitutes a threat to regional stability and an attempt to push the situation towards further tension," Hariri said in a statement from his office.

Lebanon has complained to the United Nations about Israeli planes regularly violating its airspace in recent years.

Israel has grown alarmed by the rising influence of its regional foe Iran in the war in neighboring Syria, where Tehran and Hezbollah provide military help to Damascus.

Israel deems Hezbollah as the biggest threat across its border.

The violence in Gaza spiked after Palestinian militants in the Hamas-controlled area fired rockets at southern Israel late Saturday. Israel and Gaza's Islamist movement Hamas have fought three wars since 2008. (18.08.2019)

Suspected Israeli warplanes have struck several Iranian and Syrian government targets in Aleppo, according to state television. If confirmed, it would be the first Israeli strike in Syria since January. (28.03.2019)

Israel's cabinet has visited the Golan Heights to inaugurate the country's controversial new settlement. In March, Trump recognized the territory that Israel seized from Syria in 1967 as belonging to the Jewish state. (16.06.2019)