The Israeli military has said it fired targets at a Hamas compound. Tensions have been on the rise at the border separating Gaza, prompting worries that violence could escalate once again. 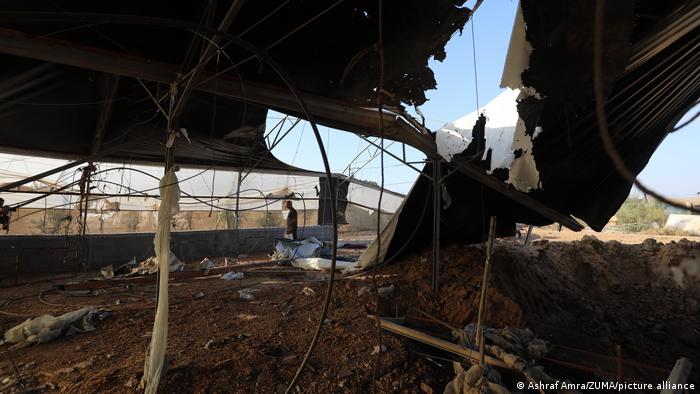 Palestinian militants on Sunday night launched a rocket into Israel from the Gaza Strip, the Israeli military said, adding that the rocket was intercepted.

Earlier, the Israeli Defense Force (IDF) said fighter jets had struck a military compound overnight into Sunday that belongs to Hamas, the Gaza-based militant movement. There were no reports of casualties.

The compound contained a number of underground rocket production workshops, a Hamas military camp with a weapons storage site, a Hamas transport tunnel and a Hamas military training facility, according to the Israeli military.

"The IDF will not accept a situation in which terrorist organizations act against Israeli civilians," the IDF said.

The latest attacks also follow the capture of four Palestinian militants who escaped from a maximum security Israeli jail on Monday.

Militants in Gaza fired a rocket into Israel on Friday when two of the six prisoners were apprehended and then again on Saturday, after two more escaped inmates were caught.

Israel has stepped up its search for the two remaining fugitives.

Israeli forces said it continues to consider Hamas to be responsible for any attacks launched from Gaza.

Tension between Israel and the Palestinians has increased over the past week — with reported deaths and injuries at protests along the Gaza Strip border prompting concerns that the two sides might soon be in open conflict again.

Israel and Hamas engaged in 11 days of airstrikes in May, resulting in at least 243 deaths, the majority of them in the Gaza Strip. Both sides claim victory in the conflict.

Hamas spokesman: We are working to avoid escalation

What is Hamas' vision for the future of Gaza after reaching a cease-fire with Israel. And is it willing to take the bold steps needed to achieve real change? Conflict Zone spoke this week with a Hamas spokesman in Gaza.