Israel evacuates Jewish Ukrainians from Moldova | Europe | News and current affairs from around the continent | DW | 15.04.2022

Fleeing the horrors of war, many of Ukraine's Jewish population have fled to Moldova. From there, the refugees are being picked up by Israeli aid organizations to be flown to safety in Tel Aviv. 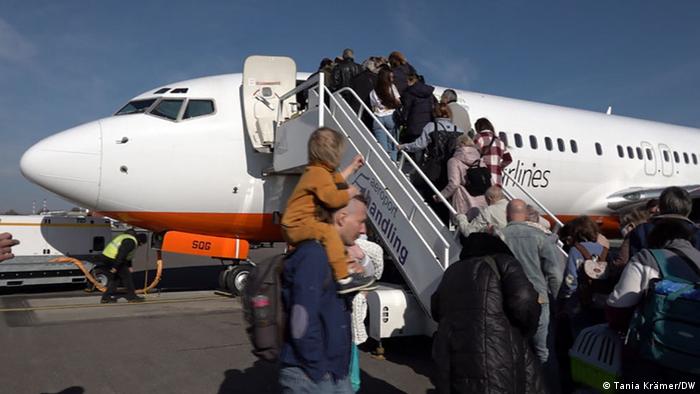 The refugees hope the flight will finally take them to safety

Elderly couples, young mothers with their kids, some pets and a few pieces of luggage make their way to the first floor of a former printing house turned into a refugee reception center in the Moldovan capital, Chisinau.

The place has been set up by Israeli aid organizations in Moldova - mainly for Jewish refugees and those who might want to immigrate to Israel, also known as "making Aliyah."

"In the meantime, we help the community and other Jewish organizations in Moldova, to live somewhere, to eat. They verify their documents, and if they have the right to come to Israel by law, then we fly them to Israel with our planes."

The place is quiet and yet busy at the same time. There is a charging point for mobile phones and a corner with tea, coffee and kosher food. Some people are queuing with documents clutched in their hands, while others are napping on makeshift beds in a separate rest area. 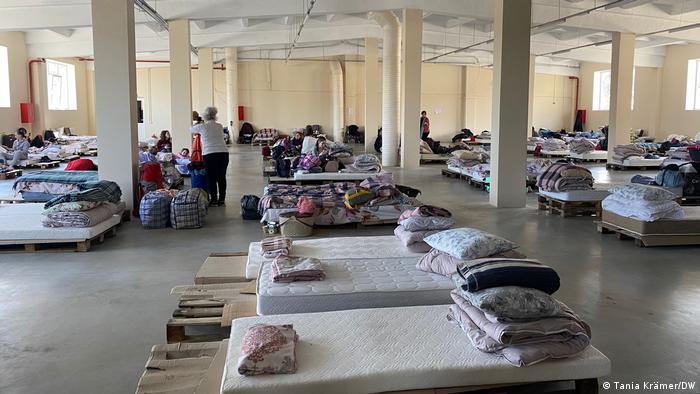 The first stop is a shelter in an old printing house

Iryna Yefimova, her elderly mother and their cat are sitting on a bench, with their suitcases and few bags piled up next to them. "We had one suitcase each - and the cat. We've been on the road for more than two days. It was very difficult. The roads were damaged around Kyiv, we almost fell from a bridge," Yevimova says with a faint smile.

When the bombardment of their hometown of Kharkiv began they first fled to Kyiv. Now, Iryna hopes to join her daughter who already lives in Israel. "We already had in mind to move [to Israel], and the war just pushed our plans forward." Iryna's husband though had to stay behind in Kyiv as men under the age of 60 are not allowed to leave Ukraine. 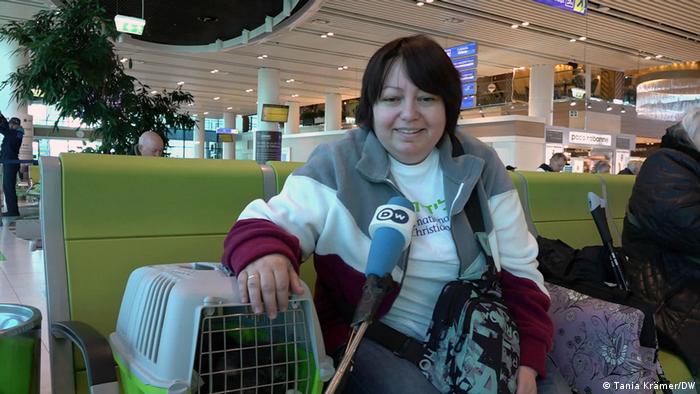 Iryna wants to join her daughter who already is in Israel

A feeling of safety

In one corner, Israeli consular staff checks passports, birth certificates and other documents needed to authenticate the eligibility of evacuees for Israeli citizenship. According to the Israeli Law of Return, anyone with at least one Jewish grandparent can immigrate to Israel and receive Israeli citizenship.

Gadi Teichman Dan, who also works at the IFCJ, is busy lending an ear to people lost in bureaucracy. "Most important is probably to know that somebody takes care of them. They lost everything in a matter of hours and find themselves in a foreign country as refugees," says Teichman Dan.

"We want to provide them with safety." 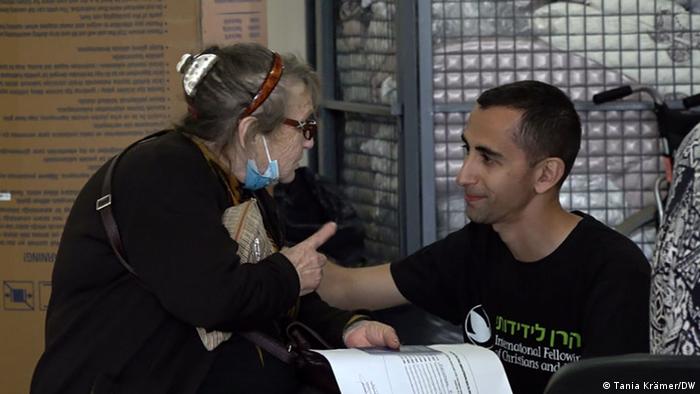 Gadi Teichman Dan helps the refugees through the maze of bureaucracy

Yulia, a young engineer originally from the Luhansk region, has arrived here alone, with just a few small bags and a big folder of documents. She has been displaced before, after the Donbas war in 2014. Her husband had to stay in Kyiv where they both had sought shelter. "We're fleeing for the second time from the war. In all these years we thought we will live in peace and leave everything terrible behind," she tells DW.

Her grandfather was Jewish, she says. But she is not sure she has all the documents needed to get clearance to travel to Israel.

"I just want to finally start living normally. I want a family, kids, to live in a peaceful place, in a peaceful country, under peaceful skies. I don't want to run from war again, for the second, third, fifth time," Yulia says, barely holding back her tears. A few days later, she finds out that for now, she won't be allowed to travel to Israel.

Since the beginning of the Russian war on Ukraine, the Jewish Agency, which assists with trips to Israel, and other Jewish organizations like the International Fellowship for Christians and Jews have been on the ground in Poland, Romania, Hungary and Moldova to help Jewish refugees.

Some refugees move to countries bordering Ukraine while others seek refuge in Israel and other countries further afield. So far, the huge wave of immigration projected by some Israeli government officials at the beginning of the conflict has not yet happened.

Even though Moldova is one of the poorest countries in Europe, it has taken in the largest number of refugees relative to its population of 2,6 million people. Of the 400,000 refugees who crossed into Moldavia since the beginning of the war, about 100,000 have remained in the country and are mostly staying with Moldovan families.

The local Jewish community and aid organizations also help those who choose to stay in Moldova instead of immigrating to Israel. Across town from the printing house, the Chabad Synagogue of Chisinau has opened its doors, offering hot kosher meals and arranging temporary housing mainly for Jewish refugees, but others are welcome as well.

"The first weeks were crazy, it's hard to describe. Now there are only specific cases that we and other organizations are handling, those who find it harder to leave," says Rabbi Mandy Gotzel, who has been in Moldova for the past five years. 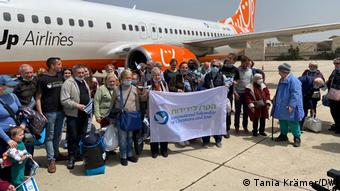 "People arrive with the trauma of a war, they saw it all, they had to come by car under fire and bombs, it's difficult", he says, adding that "thank God we do have some Israeli doctors here to help with psychological assistance. People arrive here confused, they don't know anything, it's not that they had planned a trip and know where they were going."

Next door, Natalia Daicon is diligently stirring a big pot of soup in the synagogue's kitchen. A tray of fish and potatoes is baking in the large oven. Daicon believes that a good meal is what keeps people going in crisis. "In the beginning, we had almost 500 people per day. These days, it's about 100 or 150," she says. "We made lots of soup, lentil soup, borscht, salads and that sort of thing to give them strength and happiness."

The next morning, at the airport in Chisinau, the mood is bittersweet. Some 80 people and their pets get clearance to board the chartered plane to Tel Aviv.

"It's hard to leave everything behind. Work, friends, the life you built," says Iryna Yefimova. But at the same time, there is much relief that she will make it to a safer place, at least for now.

Oren Rosenfeld contributed to this report.

Russian Foreign Minister Sergey Lavrov has warned Moldova not to endanger its troops in Transnistria, or risk an attack. Russian forces have been stationed in the breakaway region in the Moldova's east since the 1990s.