Gaza's armed groups have reportedly agreed a truce with Israel following a surge in cross-border violence. An Israeli military spokesman said its actions would be decided by what happens on the ground. 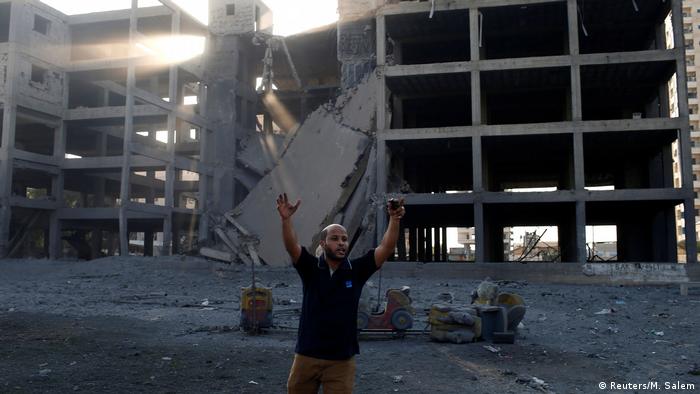 Islamic Jihad and Hamas said late Saturday that a ceasefire, brokered by Egypt and the UN, had been reached with Israel following a surge in violence on both sides of the Israel-Gaza border.

An Israeli defense official declined to comment on the reported ceasefire, but indicated that Israel's actions would depend on what happens on the ground.

Only hours after the ceasefire was to go into effect, two mortar shells were fired from Gaza and landed in a field in Israel, prompting Israel to strike the position from which the mortar was launched.

The ceasefire announcement followed what Israel described as its biggest offensive strikes on the Palestinian enclave since Protective Edge — a reference to Israel's name for its 2014 Gaza operation. 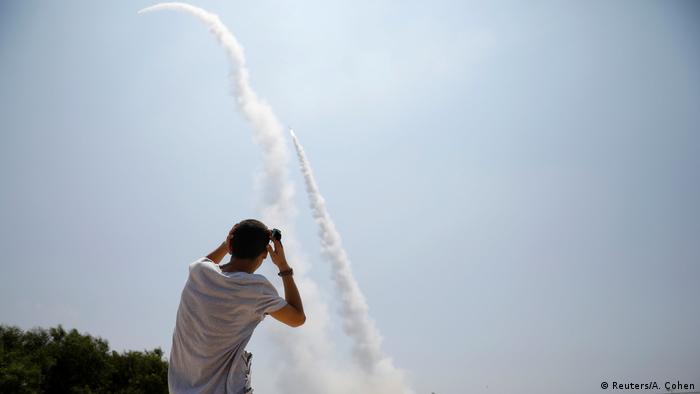 "The (military) has struck Hamas with the hardest blow since Operation Protective Edge and we will intensify the strength of attacks if necessary," Israeli Prime Minister Benjamin Netanyahu warned.

Two Palestinian boys, aged 15 and 16, were killed in Israeli airstrikes, according to Gaza's health ministry. Witnesses said Israeli warplanes dropped four bombs on a building in Gaza City. The boys were nearby and hit by shrapnel.

Israel's Magen David Adom emergency service said it treated a 52-year-old man, a 17-year-old girl and a 20-year-old woman for their injuries after a rocket landed on a residential home in the southern Israeli city of Sderot. 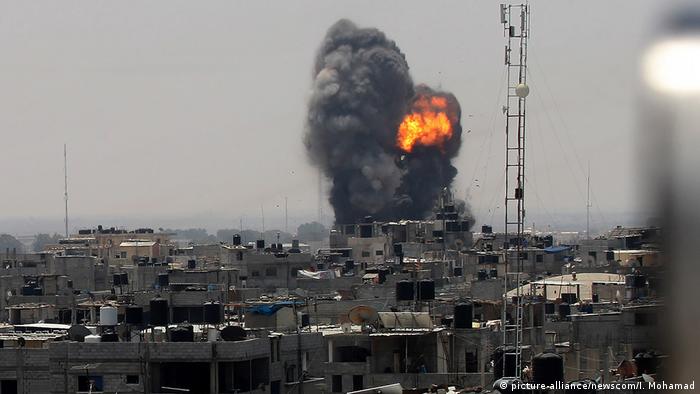 He blamed Hamas for the escalation, citing the militants' mortar and rocket attacks that set off alarms in Israel and forced residents to seek shelter. More than 30 of the rockets and mortars were intercepted by Israel's Iron Dome defense system, while more than 100 landed in empty fields.

Israel also accused Hamas of fomenting violence along the border and for its campaign of sending incendiary kites and balloons across the border, some of which have devastated Israeli farmland.

"Our message to Hamas is that we can and will enhance the intensity of our effort if needed," Conricus said. "What Hamas is doing is pushing them ever closer to the edge of the abyss ... Hamas will have to understand that there is a price to be paid."

On July 9, in response to the burning kites Israel closed its only goods crossing into the enclave of 2 million people, which has been under an 11-year-old blockade.

The UN condemned the decision as a "further tightening of an already-punitive and comprehensive blockade" that would worsen an already dire humanitarian crisis and amounted to collective punishment in violation of international law.

But Hamas spokesman Fawzi Barhoum said the latest volley of fire was an "immediate response to the Israeli airstrikes" that was meant to "deliver the message."

He added, "The protection and the defense of our people is a national duty and a strategic choice," Barhoum said.

Two Palestinians, including a teenager, were shot and killed by Israeli forces. An Israeli officer was wounded by a Palestinian grenade thrown over the border fence, the military said.

Later in the day Israel responded with the full weight of its air force. Hamas then fired its ground missiles into Israel, which resulted in still more retaliatory airstrikes from the Israeli air force. That, in turn, begot additional volleys of rocket fire from Hamas.

Read more: Hamas: It wasn't supposed to be like this

Israeli warplanes launched an overnight raid on a Hamas facility in Gaza in what the army said was a "retaliatory attack." Health officals in Gaza said one person was injured in the strikes. (17.05.2018)