More than a third of the weapons used by "Islamic State" in Iraq and Syria came from European Union states — including Germany, a new report has found. The data shows that deadly arms can often end up in the wrong hands. 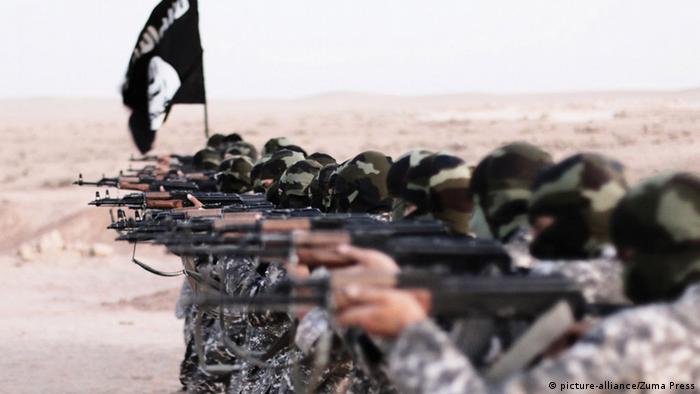 A significant proportion of the guns and ammunition in "Islamic State's" (IS) cache were manufactured in the European Union, according to the study published Thursday by Conflict Armament Research (CAR).

In its 200-page investigation, the weapons tracking organization claimed that more than 30 percent of the arms used by IS extremists on battlefields in Syria and Iraq originally came from factories in Bulgaria, Romania, Hungary and Germany.

Russia and China produced more than half of the weapons held by the terror group, the report added.

The study, Weapons of the Islamic State, is the result of three years of fieldwork carried out by CAR teams in Iraq and Syria. Between 2014 and 2017, researchers analyzed more than 40,000 items recovered from IS frontline positions, including guns, ammunition, and components used to make explosive devices.

How do weapons reach IS?

The report pointed out that most IS weapons were looted from the Iraqi and Syrian armies. But in many cases arms purchased from eastern European states by Saudi Arabia and the United States — and then supplied to Syrian opposition forces — also ended up in the jihadi group's hands.

"These findings are a stark reminder of the contradictions inherent in supplying weapons into armed conflicts in which multiple competing and overlapping non-state armed groups operate," the report said.

It detailed how Saudi Arabia and the United States had bought billions of dollars worth of weapons from eastern European nations before passing them on to Syrian militias, often breaching contractual clauses.

"Many of these transfers have violated the terms of sale and export agreed between weapon exporters — primarily EU Member States — and recipients in Saudi Arabia and the United States," the researchers said.

From Europe to IS in two months

In one case, CAR said it traced an advanced anti-tank guided weapon that was manufactured in the EU, sold to the United States, and then supplied to a party in the Syrian conflict before ending up in the hands of IS forces in Iraq — all within two months of the weapon leaving the factory.

"International weapon supplies to factions in the Syrian conflict have significantly augmented the quantity and quality of weapons available to IS forces — in numbers far beyond those that would have been available to the group through battlefield capture alone," the report said.

According to CAR, the parties involved in these arms transfers often deliberately attempted to conceal the weapon's source by changing the packaging, and removing or painting over factory markings. The researchers added that some of their data had led to criminal proceedings, including investigations by Belgian police into supplies of parts of improvised explosive devices (IED).

IS captured a large chunk of Iraq and Syria during a lightning offensive in 2014. They've since lost most of that territory, but CAR warned the militants still pose a threat because they've acquired the ability to manufacture their own highly sophisticated weapons.

"Combined with global reach, demonstrated logistical and organizational capacity, and willing recruits around the world, these factors translate into an exportable capacity to conduct insurgency and terrorism well beyond the region," the report concluded.

The "Islamic State" has used chemical weapons on at least 52 occasions in Iraq and Syria, says a London-based analytical firm. The IHS Markit report comes as Iraqi forces seek to retake Mosul from the militant group. (22.11.2016)