Germany has resumed weapons shipments to Iraqi Kurdistan, where forces are battling "Islamic State" fighters. Germany halted the shipments in January after a media report found some of the weapons on the black market. 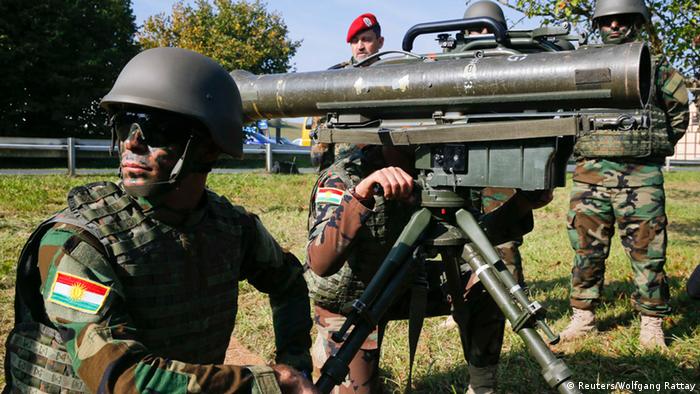 The German military on Wednesday said it had resumed weapons shipments to the Iraqi Kurdish peshmerga after the Kurdistan Regional Government vowed to ensure the arms would not end up in the hands of unauthorized users.

Germany stopped weapons shipments to the Iraqi Kurds in January after media reports emerged showing some weapons meant to fight IS were being sold on the black market. An Iraqi Kurdish investigation into the matter found 30 of 28,000 weapons delivered by Germany had been lost or illegally sold.

The latest arms shipment came with an end-user agreement in which the Kurdish government agreed to not hand over any German arms to third parties.

Germany has sent more than 2,000 tons of weapons in more than 30 shipments to the Iraqi Kurds since the first weapons were delivered in September 2014. Germany also has about 150 troops in northern Iraq training Kurdish forces alongside other nations in the anti-IS coalition. Kurdish forces have also been trained in Germany.

The Peshmerga in Iraq

Kurdish forces have recaptured six villages from the so-called "Islamic State" (IS), southeast of the group's stronghold of Mosul. The liberation came the day after government forces also freed a number of villages. (14.08.2016)